It was once a sleepy, waterfront town enlarged by the Romans, then used as a 19th-century Austrian naval port. Today, Pula is modern Istria’s commercial hub, with a rich history and a relaxed, down-to-earth air. At its heart is a monumental Roman amphitheater, built in the 1st century and still in use today. Roman temples and gates dot the old town, a Venetian fortress tops its highest point, and a network of World War I-era tunnels lies beneath its streets. 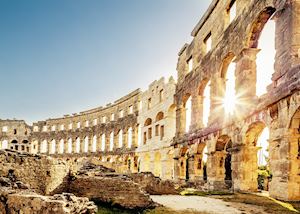 Pula is not a major visitor destination, but rather a modern Croatian city where you can get a sense of everyday life in the country, as well as an overview of its history.

Pula is dominated by its Roman amphitheater, an enormous oval structure with seating for 22,000 spectators. It’s the sixth largest in the world and testifies to Pula’s importance in the Roman Empire at one point. Along with clambering up the tiers of seating and surveying the scale of the construction from the main arena, you can explore the underground chambers once used to house wild animals before the gladiatorial contests began. The chambers now contain an exhibition on wine production in Istria with a series of presses and amphorae on show.

As part of the Pula Svperiorvm Days of Antiquity festival which runs between June and September each year, the arena hosts a mock battle with costumed performers playing out the roles of Roman gladiators. Live music and performances, meanwhile, take place on what was the Roman Forum, just a short walk away.

Set along the waterfront, Pula’s former Roman Forum is now a public square flanked by the city’s other major archaeological site, the Temple of Augustus. This small, 1st-century structure was later converted into a church, then suffered bomb damage in 1944. It has since been completely rebuilt, and now houses a small archaeological exhibition. 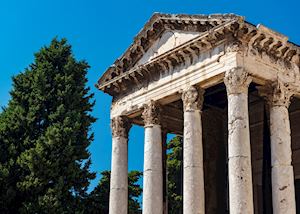 Uphill from here, at the heart of Pula’s old town, is a 17th-century fortress built by the Venetians. It sits on a hilltop fortified since ancient times and offers good views over the city and waterfront. Behind it lies the remains of a small Roman temple, while below it snakes a series of hidden tunnels.

Built during World War I to shelter residents from air raids, Zerostrasse is a network of underground tunnels that stretch across the entire city. The tunnels, communication passages and ammunition stores could hold 50,000 people with entrances dotted around the city and passages that converged in a large hall beneath the Venetian fortress. Some sections of the tunnels are open for cultural events and exhibitions.

Pula was a major naval base in the 19th century and its docks contain one of the world’s oldest working shipyards. Rather than move the shipyards out of the downtown area as the city expanded, Pula’s governing body decided to commission Croatian lighting designer Dean Skira to improve the shipyards’ image. The Lighting Giants project is a vibrant evening display that illuminates the eight cranes at the city’s Uljanik shipyard. It takes place every evening on the hour from 9pm to midnight and lasts 15 minutes. It has become one of the city’s most popular attractions, with 16,000 different tones and hues used to turn the shipyard’s cranes into sculptural public art.

Pula’s other major cultural event is the Pula Film Festival which was established in 1954. It takes place over a week in late July or early August, with screenings of Croatian and international films at the Roman amphitheater. There’s a student hub, industry talks, a variety of exhibitions and workshops, and a whole host of music and food events that cater to the crowds who gather for the festival.

Pula is a good year-round destination but is at its best between late April and June and from mid-September to October. July and August are a particularly busy time to visit with larger crowds and temperatures reaching 30°C (86°F), while winter (November to February) is cooler and wetter.

This sample itinerary will give you an idea of what is possible when you travel in Pula, and showcases routes we know work particularly well. Treat this as inspiration, because your trip will be created uniquely by one of our specialists.