A castle hotel, a medieval wall and the crisp sweetness of Riesling in the tiny Rhine town of Oberwesel. 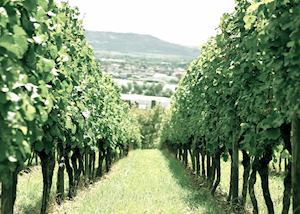 Set amid the castles, half-timbered houses and terraced green vineyards along the Rhine Valley, the town of Oberwesel offers you some fine examples of intact medieval architecture. Once a haven for monasteries — it had nine in the Middle Ages — the town now boasts several proud churches, including the Liebfrauenkirche with its arched red façade, and the brilliantly whitewashed Martinskirche. 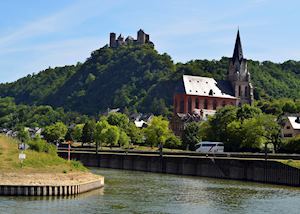 Schönberg Castle, the dominant feature of Oberwesel, rises from a bluff above the Rhine. This stronghold, dating back a millennium, sat in ruins on the hilltop for 200 years after its burning in 1689 by French forces. In the late 19th century, the German-American Rhinelander family bought the castle and restored it.

The castle came back into possession of the town council in 1950, and the same family has been running the property since 1957. The Hüttl family converted much of the grounds into a hotel and restaurant, where you can stay during your trip along the Rhine. While parts of the Castlehotel Schönberg are new, much of the original structure remains and has been lovingly repurposed, giving you a glimpse into its history.

This sample itinerary will give you an idea of what is possible when you travel in Oberwesel, and showcases routes we know work particularly well. Treat this as inspiration, because your trip will be created uniquely by one of our specialists.