What to do in Bali: our highlights guide

In a country of thousands of islands, Bali remains Indonesia's undisputed star - the island our travelers want to experience more than any other.

If you don't want to fly across the archipelago, Bali remains for me the essence of Indonesia, compressed into a few thousand square miles.

In all my time traveling in Bali I have always found something new to try, whether it's a previously unexplored beach or watching traditional dances at a clifftop temple. But it's also made for enjoying the simple things, such as being invited to try a banana fritter (a personal favorite) by a local.

Find the beaches no one else knows

A white-sand cove on the Bukit Peninsula

It's Bali’s southern beaches that take the crown for relaxing on long stretches of white sand. The choppier waters and a perpetual sea temperature of around 30 degrees provide ideal conditions for the surfers who haunt this stretch, riding the waves from dawn until dusk.

Seminyak is my favorite of Bali's southern beaches, for its quieter air and fewer crowds, although it's still a popular resort close to the airport.

Dropping south along the coast, however, to the Bukit Peninsular, which dangles off Bali's southernmost tip, is still very much unexplored.

Bali's coastline generally falls into two brackets: crunching surf beaches or volcanic sand. But, sheltered white-sand coves skirted by turquoise waters are cut into Bukit's coastline, if you know where to look.

A knowledgeable local guide can take you to recommended spots, which are otherwise only frequented by locals and surfers. The roads twist and wind down to small private coves, hidden in the cliffs and sometimes only accessible through a cave or two.

Bali's water behaves very differently from one side to the other. The south suits surfing, while the sheltered north is better for swimming and snorkeling.

In sharp contrast to the south, the black volcanic sand beaches on the north and east coasts are very remote and quiet. Small fishing communities mark the coast and boats with the traditional side-awning ply the shores. Temples watch over the sea – which the Balinese fear and don’t like to venture into.

The sand doesn’t lend itself to sunbathing on - it’s very coarse and sharp - so the resorts have compensated by providing pools positioned to take advantage of the dramatic backdrops and setting up some of the island’s best spa resorts, such as Damai Lovina.

Observe the marine life on the north west coast

The colorful reef off of Menjangan Island

The north west coast, meanwhile, makes for wonderful snorkeling experiences. It plays host to the area's best coral reefs, wreck diving and tropical fish including mantas around Menjangan Island, part of the Bali Barat National Park – which dominates the north-west of Bali.

With this incremental change in location comes golden beaches and greater numbers of wildlife, including the turtles that have made the park their home. Swimming with them is something I can't recommend highly enough.

Experience the culture and wildlife in the north of Bali

One of Bali's many macaque monkeys

The pace of life and the climate are noticeably different in the north of Bali compared to the south. It's quieter, cooler and asks to be explored by bicycle or trekking. You stumble across villages en route, where there's almost invariably a festival or some community gathering going on.

People in Bali are out and about whatever the time of day, so you get absorbed into everyday life as it passes you by. While the father of a household might be up a tree harvesting coconuts for wine (an activity that's not for the faint hearted) the children will invite you play football.

Inland, the Bali Barat National Park is a mix of grassland and coastal savannah. It’s home to Javan Rusa – a deer native to three Indonesian islands - and Indian Muntjac deer as well as more than 160 species of birdlife. And, macaque monkeys are everywhere – occasionally sneaking down to steal sunglasses off the heads of the unsuspecting.

The islands that neighbour Bali are happy to bask outside Bali's limelight and remain comparatively untouched. The beaches are arguably better, with some of the best snorkeling you'll find. My blueprint for an ideal vacation in Bali invariably involves a week on Lombok, using it as a base for day trips to other islands.

The cultures are very different in Bali and Lombok, despite the two islands being so close. Bali is used to throngs of travelers and has flexed to accommodate them. But Lombok is culturally very conservative, and Westerners are still uncommon visitors in the villages. Expect to be treated like a minor celebrity, particularly by the children.

While it's not about luxury in the traditional sense, the beach bungalows on Gili Meno (the middle dot) are particularly popular with honeymooners for their sense of peaceful escapism.

Every family in Bali has a temple in their house, in addition to those in every village. While Balinese homes are simple, the temples are elaborate and adorned with gold leaf. The household will make an offering of a gift of rice and maybe mango or similar on a banana leaf in the mornings.

Because of this entrenched spirituality, visiting the temples is a natural highlight of traveling to Bali. Their locations, perched on cliff tops and volcanoes, adds to the drama.

The Tanah Lot temple on an outcrop on the south coast near Kerambitan is a particular favorite of mine. At high tide you need to get a boat to visit it but at low tide you can simply walk across a causeway from the mainland. On arrival, you're presented with traditional dress to wear and you can make an offering yourself.

Mat's favorite three things to do in Bali:

Bali is known for having very good coffee thanks to its unique manufacturing process. The island is one of the main producers of Kopi Luwak, a coffee processed by the digestive system of the native Asian palm civet cat. It's quite expensive, very rare and has a certain repulsive charm.

I'm drawn to the whole area of Uluwatu – on Bali's south coast - just because it’s one of the best places to surf in the world. I gave surfing here a go and, to be honest, it was a bit too much (and you need to wear a helmet because it has a reef). But, it’s just an incredible place to go, sit in one of the cliff bars and watch the surfers drop in from three-metre waves.

On top of the cliff is a temple where Macaque monkeys sit like gargoyles on the walls. From here, you can sit and watch the deepening sunset.

Bali's tradition of music and dances stems from its Hindu culture. There are many opportunities to see temple dances, but the best one I've encountered is at the Chedi Club in Ubud, Bali's capital. You arrive at sunset and settle in with a cocktail, when suddenly around 100 men of all ages appear in traditional dress and start a rhythmical, hypnotic chant.

The dance develops into a mock war, the performers throwing fire with their bare hands and using traditional drums and whistles to create the music before it comes to a climax. It's beautiful to watch in conjunction with the surrounding noises of the jungle.

When to visit Bali

Traditionally, May, June and July are the best times to visit Bali because of the weather. But, because of the differing climate in the north - more arid and sheltered by the volcanoes- it can also be a great location around February.

Start planning your trip to Bali 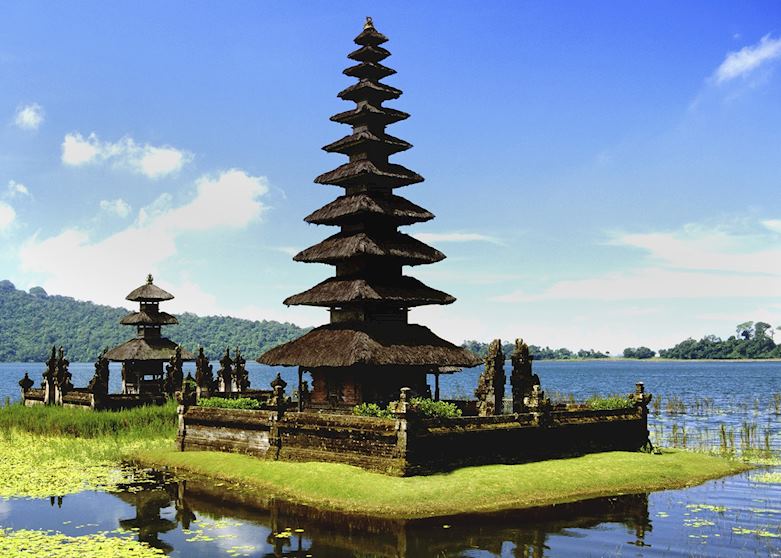 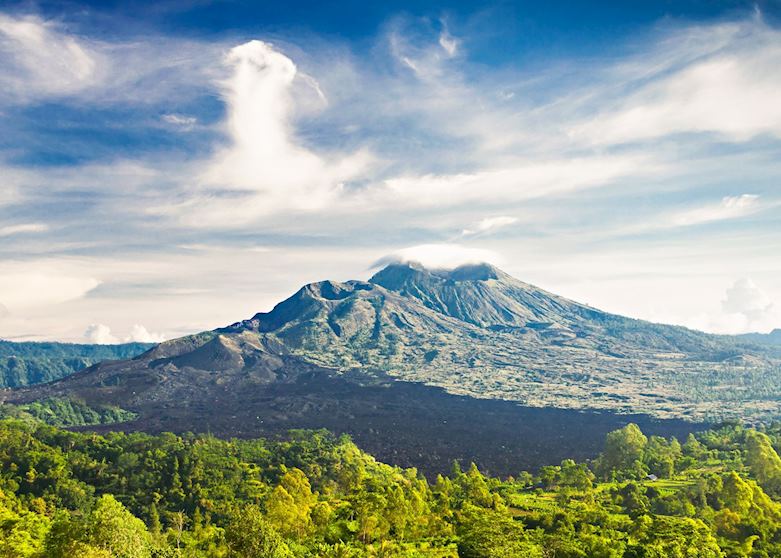 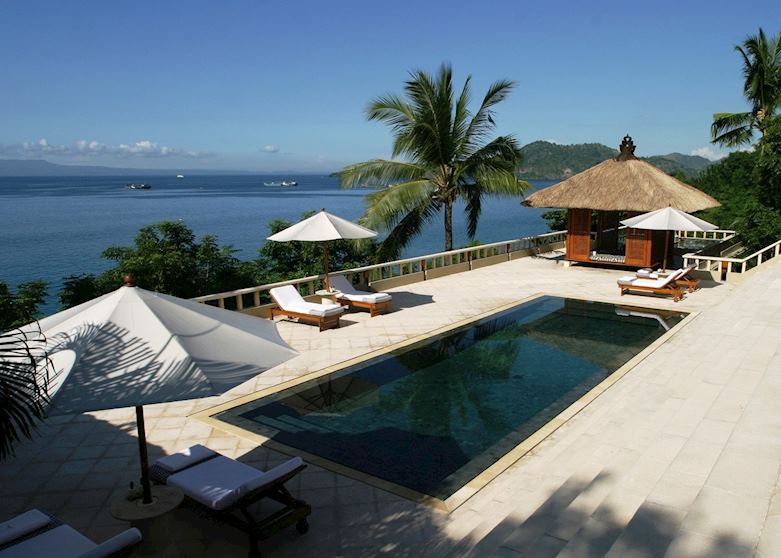