Surrounded by a dormant volcano, bubbling mud pools, steaming vent holes and lush hills clad in dense, subtropical forest, Furnas Lake is one of São Miguel’s most popular attractions. See the crater lake and the surrounding valley from a sit-on-top kayak on a serene two-hour paddle that passes historic monuments, geothermal fields and subtropical gardens. You’ll learn about the region’s history, geology and volcanic activity from your guide, hear stories about influential residents and begin to understand the threats to the local environment and the efforts being made to preserve the endemic plant species that thrive here.

You’ll meet your guide at the cozido cooking area by the lake. After a short safety briefing and some basic paddling instruction, you’ll set off across the lake at a gentle pace. The placid waters are cradled by steep hills clad in temperate mixed forests giving the lake a very serene atmosphere.

Clouds of steam billow from the ground at the northern end of the lake where geothermal activity feeds hot springs, bubbling mud pools and steaming fumaroles. As you paddle, your guide will explain about the island’s position on the cusp of the Eurasian, African and North American tectonic plates which causes its volatile geological conditions.

You’ll also hear about the eruption of Furnas Volcano to the south of the lake in 1630 and its influence in shaping the landscape and its endemic plant species. Protection of the local environment is a key purpose of the modern Furnas Monitoring and Research Center on the lake shore. Your guide will tell you about efforts to preserve the local ecosystem by removing invasive non-native species and replacing them with native trees and shrubs along with a network of walking and equestrian paths.

On the western shore you’ll see the neo-Gothic Chapel of Our Lady of Victories, a mausoleum built by gentleman-farmer José do Canto after the death of his wife. While paddling close to the shore you can see the thick vegetation that blankets the surrounding hills, from groves of lush ferns to azaleas, camellias, and hydrangeas.

After about two hours’ exploring, you’ll return with your guide to the cozido area.

Photos of Kayaking at Furnas Lagoon

Other experiences in the Azores 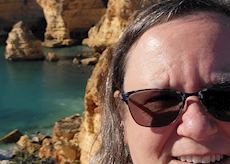