Blending contemporary design with traditional influences, the Four Seasons Seoul offers a compelling combination of local character and understated luxury. From the stylish decor and generous rooms to the discreet and efficient service, everything is done with great attention to detail.

The five-star hotel sits in the heart of Seoul’s historic district, Gwanghwamun, and impresses as soon as you enter the main lobby with its high ceilings and cast bronze fireplace. Throughout the hotel, you’ll see contemporary Korean art on display alongside traditional materials such as local wood and stone.

The 317 rooms are some of the largest in the city and boast the same fusion of contemporary and traditional design with large windows offering sweeping views over the city, Italian marble bathrooms and small design touches such as books, ceramics and fresh flowers that give a more personal touch than most large Korean hotels.

Good food is a hallmark of the hotel with options ranging from Michelin-starred Cantonese cuisine to Korean, Japanese and Italian options. There’s also an indoor pool, a large spa and gym, and a convenient location with many of the city sights within walking distance. 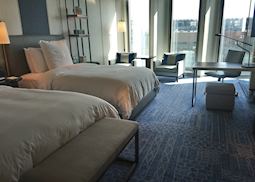 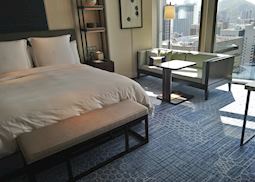 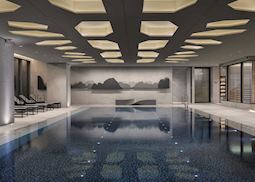 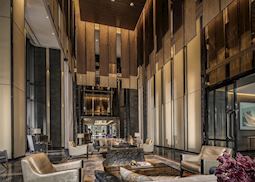 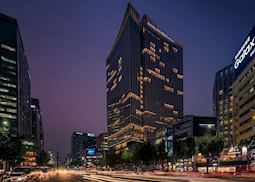 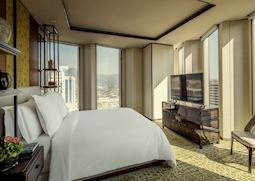 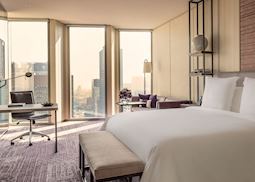 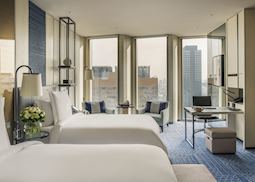 Guest rooms are some of the most spacious in the city and all have floor-to-ceiling windows that flood the rooms with light. The decor is sleek and contemporary but features some traditional details such as Korean silks or ceramics for local character. Some rooms overlook the Gwanghwamun Gate, while the suites offer wraparound views of the Seoul skyline — the Palace Suites overlook the Gyeongbokgung Palace.

The Italian marble bathrooms all have soaking tubs and each room has an iPad mini and espresso maker. Club rooms and suites include access to the Executive Club, which features a 24-hour concierge service and light refreshments throughout the day.

Located a short walk from Seoul’s Gwanghwamun Gate and Gyeongbokgung Palace, the Four Seasons is right at the heart of Seoul’s historical core. There are plenty of restaurants in the immediate area and the Cheonggyecheon stream, a pedestrian-only thoroughfare that’s a great place for a stroll, is nearby, as is the Gwanghwamun subway station.

Food is a major part of the hotel’s service with eight dining facilities. The Market Kitchen is inspired by a traditional European market hall and has multiple cooking stations that serve a selection of international dishes. Boccalino and Akira Black serve southern Italian and Japanese dishes respectively, while the highlight is Michelin-starred Yu Yuan, which serves Cantonese cuisine in a setting reminiscent of Shanghai’s swinging 1920s.

Although not your typical family property, the hotel can accommodate younger guests with family rooms, a babysitting service, children’s lounge and a plunge pool for children.

The hotel has a wide range of facilities including a seven-room spa, traditional Korean sauna, nail bar and barbershop. There is a large gym offering classes and personal training as well as a three-lane pool, and a quirky indoor golf experience.

The hotel offers both king and twin accessible Deluxe rooms. The whole property is accessible via elevator.

In terms of location and quality, the Four Seasons is arguably the best hotel in the city. Of the on-site restaurants, Yu Yuan, a one-Michelin-star Cantonese restaurant is the most impressive.