A vibrant Mediterranean city that overflows with art and architecture, Barcelona is known for its association with Modernist architect Antoni Gaudí, but its offerings extend far beyond the works of just one man. A feverish period at the start of the 20th century saw Gaudí, Pablo Picasso and Joan Miró all stake their claim on Catalonia’s cultural capital.

You can chart Picasso’s progression in the museum of his name or take the cable car to Montjuïc to see local-born Miró’s work. In Barcelona’s Gothic Quarter you’ll find the medieval cathedral and lanes from where Gaudí pulled inspiration. Outside all this, the efficient public transport system makes it easy to get around and simply soak up the city's character on its golden beaches or in its public parks.

What I love about Barcelona is the interplay between the old and the new. At its core you’ll find a beautifully intact 14th-century Gothic quarter, but head out to L’Eixample and you can immerse yourself among the curving organic lines of Avant-garde modernist buildings.

Things to see and do in Barcelona 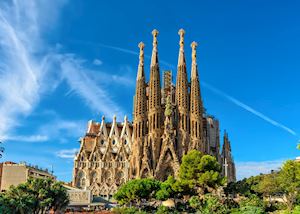 Antoni Gaudí's most ambitious and flamboyant project, the Sagrada Família is still under construction 130 years after work started. The basilica's design breaks with all previous architectural styles in a dream-like concoction of flowing organic shapes, vibrant mosaic work and soaring towers.

An extraordinary feat of creativity and technical achievement, it’s one of Spain's most renowned structures. Even today, it pushes the boundaries of architectural theory. Climb the towers for elevated views of the city and a close up of the attention to detail that Gaudí lavished on all elements of the structure, including at roof level. The basement museum has displays on Gaudí's life, working methods and other projects.

Another of Gaudí’s well-known projects, Park Güell was a grand, early 20th-century plan to build a new community on the outskirts of Barcelona. Although the project was never completed, the initial houses and landscaped parkland are built in typical Gaudí style with sloping walls, mosaics and free-flowing detail.

At the entrance are two fairytale-style houses with brown stucco façades, curvy white roofs that look covered in icing, and, on one, a blue and white spire. A giant lizard clad in a blue and orange mosaic of broken tiles flanks the stairways of the parkland beyond. Sinuous benches are intricately covered in more mosaic, pathways lace through woodland and one of the houses, where Gaudí lived for 20 years, is now a museum.

Overcrowding in the 19th century created a need to expand Barcelona to accommodate its growing population. A new district, L’Eixample (pronounced 'lay-sham-pluh'), was built in the en-vogue Modernist style.

Many of the city's most important examples of Modernist architecture are here, including the Sagrada Família and Gaudí's Casa Batlló and Casa Milà (also known as La Pedrera), which sit on the boulevard Passeig de Gràcia, along with a host of other notable buildings. The pulsing heart of L’Eixample, the street is also lined with designer shops, high-end restaurants and numerous nightspots. 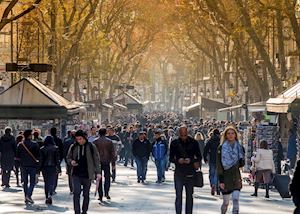 Arguably the most well-known street in Spain, La Rambla is a broad, semi-pedestrian thoroughfare brimming with shops, outdoor cafés and street performers. It’s divided up into five shorter segments marked by different points of interest, which is why it’s sometimes referred to as ‘Las Ramblas’.

While the area is mainly a tourist hotspot, it's worth heading to Mercat de la Boqueria for a vibrant taste of local life. This food market overflows with fruit and vegetables, fish and seafood, sausages, meat and cheeses. Here, you can try some of the regional specialties, from cured jamón ibérico and ridged Montserrat tomatoes, to dried salt cod and razor clams.

Barcelona’s Gothic Quarter is the historic heart of the city, and was its focal point during Roman and medieval times and contains some of Barcelona’s oldest buildings.

The most prominent attraction is the medieval cathedral, which has a richly decorated façade added in 1870 and a cloister with a resident flock of geese (a tradition dating back to medieval times). Nearby are the ruins of the Roman Temple d'August and the handsome Plaça del Rei (King’s Square), where the Grand Royal Palace now houses a museum.

The area is a hive of shops, bars and restaurants lining the cobblestone streets, hidden squares, and a host of intriguing lanes to explore.

Five handsome stone palaces dating from the 14th century host Barcelona's Picasso Museum, serving as an exploration of the artist's development. More than 3,500 of his works are on display here, including sketches, oils and ceramics with a particular focus on his early work. The museum offers an in-depth insight into his working methods, early practice, inspiration and ingenuity.

Among the most important works in the collection are his studies and interpretations of Velázquez’s masterpiece Las Meninas, which Picasso deconstructed over a series of 44 canvases while looking at its composition and portraits in minute detail.

Up on a hill overlooking the port is Montjuïc, a district with numerous art museums, a 17th-century castle and Barcelona’s Olympic Stadium from when the city hosted the games in 1992.

Among the many sights worth seeing are the Museu Nacional d’Art de Catalunya, which is set in a massive neo-Baroque building. It predominantly displays Catalan art with a strong Romanesque collection.

The Fundació Joan Miró is set in a white Rationalist building and displays a large collection of work by the locally born artist. Meanwhile, CaixaForum showcases contemporary international art in a Modernista building designed by Puig i Cadafalch.

A fishermen's village in the 18th century, La Barceloneta is now Barcelona's premier beachfront with restaurants, bars and clubs lining the boardwalk along the golden sand. Some of Barcelona’s best seafood restaurants are here, and around the nearby Port Olímpic (Olympic Port).

Wander a few streets back from the waterfront and you'll find a more local atmosphere, where old women watch the world go by from their balconies and men sit on their doorsteps in the narrow streets. You can also get a cable car up the hill to Montjuïc from here, for sweeping views of the city.

May to June and September to October are good times to visit Barcelona. The weather is warm and sunny, there are plenty of festivals and special events, and you avoid the heat and humidity of summer and the peak tourist season.

Our itineraries will give you suggestions for what is possible when you travel in Barcelona, and they showcase routes we know work particularly well. Treat them as inspiration, because your trip will be created uniquely by one of our specialists.

We’ve selected a range of accommodation options for when you visit Barcelona. Our choices usually come recommended for their character, facilities and service or location. Our specialists always aim to suggest properties that match your preferences.

Our specialists seek out authentic ways to get to know the places that could feature in your trip. These activities reflect some of the experiences they've most enjoyed while visiting Barcelona, and which use the best local guides.