The Norbulingka - the Jewel Park - contains the summer palaces of the 13th and 14th Dalai Lamas and is characterized by its spacious walled garden, the main throne hall, an audience hall, the Dalai Lama's private apartment and his mother's apartment.

The gardens are now a little run down, but are the favorite site for huge Tibetan gatherings during festivals. The whole place has a ghost town feel, but this is not surprising as it has been empty since the Dalai Lama fled to India in 1959.

Start planning your tailor-made vacation by contacting ​one of our certified Tibet specialists... 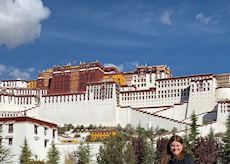