Larger than Yellowstone, Yosemite, and Switzerland combined, Wrangell-St. Elias is the largest national park in the US and a place that defies superlatives. 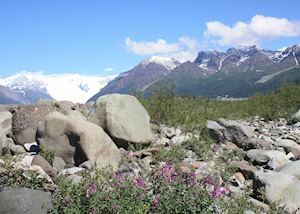 The park is bordered by Canada’s Kluane National Park and together, they encompass a country-sized sprawl of canyons, valleys, towering mountains and ice-fields. Bagley Icefield is the largest non-polar ice sheet in North America, and the Malaspina Glacier alone is larger than Rhode Island state.

Start planning your tailor-made trip to Wrangell-St. Elias National Park & Preserve by contacting one of our Alaska specialists

This sample itinerary will give you an idea of what is possible when you travel in Wrangell-St. Elias National Park & Preserve, and showcases routes we know work particularly well. Treat this as inspiration, because your trip will be created uniquely by one of our specialists.