What to do in Australia: our highlights guide

No matter how long you have to spend in Australia, it never quite feels enough. A country so vast and so varied, there are all manner of draws to keep you returning time and again, from modern metropolises, rich red deserts and the biggest barrier reef in the world, to wildlife and Aboriginal culture. An efficient domestic flight network also allows you to cover large distances with ease.

Sydney, the entry point for many international visitors, is perhaps Australia’s most iconic city. It’s very easy to navigate independently with many of the classic sights, such as the Sydney Harbour Bridge, Opera House, botanical gardens and Rocks area, found around Circular Quay.

The Rocks is historically significant as this is where the first settlers, most of whom were convicts, landed. It’s been rejuvenated over the years, and a guided tour of the area will take you to the country’s oldest pub as well as other buildings of note.

The unique architecture of the Sydney Opera House can be seen from the water, or from around the base of the structure, but for something different, you can take a tour that explores the interior and gives you access to the backstage area before performers arrive.

Sydney is known for its beaches and there are several to choose from. I’d recommend making use of the efficient public ferry service to reach some of them – including my favorite, Manly Beach. You’ll have the added benefit of spectacular views across the harbor from the water.

Bondi, the city’s most recognizable (and busiest) stretch of sand, can be reached by bus from the city center. Despite its popularity, there are still ways to escape the crowds. I’d suggest walking the coastal footpath along the craggy hilltop to the crashing surf at nearby Bronte Beach, which is a pleasant one and a half to two hour stroll.

Take in Uluru and Kata Tjuta in the Red Centre

A terrain of rich red desert, salt lakes and towering monoliths, Uluru-Kata Tjuta National Park in central Australia has an interesting history and is culturally significant for Australia’s Aboriginal community. The park is a three and a half hour flight from Sydney.

This is where you’ll find Ayers Rock and The Olgas, or to give them their Aboriginal names, Uluru and Kata Tjuta. These soaring rock formations pierce the landscape, their deep earthy shades contrasting with the bright blue sky of Australia’s Outback.

The best times to visit Uluru and Kata Tjuta are at sunrise and sunset, when the changing light plays off them. At sunset the light evolves from gold, to orange and then red before darkness sets in and you see the silhouette of the rocks against a starry sky hardly touched by light pollution.

You can also take a tour around the base of Uluru, where you’ll see traditional Aboriginal rock art. A guide will explain the significance of these paintings and what they represent in dreamtime, the Aboriginal way of interpreting their stories and history.

Uluru-Kata Tjuta National Park is undoubtedly a highlight of any trip to Australia and as such it can be very busy. For a more peaceful experience, I went on a tour of Mount Conner. Widely considered the third monolith of the region, from a distance the rock is often mistaken for Uluru. Mount Conner sits within a private station, meaning it’s quieter than its neighbors.

I’d suggest that two nights is enough in the Red Center, but if you have more time you could also visit Kings Canyon, a three and a half hour drive away from Uluru. Take a creek walk along the bottom and peer up at the towering sides of this huge crevasse, or walk along the rim for sweeping views across the countryside.

Relax on the Great Barrier Reef

Stretching for 2,300 kilometers (1,429 miles) along Australia’s northeast coast is the world’s largest coral reef, and one I am fascinated by. I’ve discovered countless ways to experience the Great Barrier Reef during my time in Australia.

Day trips from the mainland are good for those short on time, but you’ll be visiting the most accessible stretches of reef where the number of visitors has had an impact on the coral over the years. If you have a little longer, I would heartily recommend either a multi-day cruise or staying on one of the islands. The further out you travel from the mainland, the clearer the water and the brighter the marine life is.

I spent a few nights on Lizard Island. This is one of the more northerly islands in the Great Barrier Reef archipelago and it’s possible to snorkel directly off the beach here. The coral is untouched and so vibrant. The first time I jumped into the sea here I spotted a hawksbill turtle. I followed him for a little while before stumbling across a giant clam garden.

Among the species of marine life inhabiting these waters are octopus, reef sharks, manta rays and countless schools of fish such as the clownfish with their distinctive orange, white and black stripes.

Just west of Melbourne on Australia’s south coast, a stretch of road is carved into the limestone cliffs. This is the Great Ocean Road, a rewarding self-driving route and, in my opinion, one of the most spectacular coastal drives in the world. Get behind the wheel here and you can explore small coastal towns, the Otway National Park - with the highest concentration of koalas in all of Australia – and the wild ocean scenery.

The sea edge along the Great Ocean Road is dotted with limestone rock formations such at the Twelve Apostles and London Bridge, and you can stop off in the many laybys and car parks for a closer look. At some points, little wooden steps lead down to deserted stretches of golden sand where the rough surf crashes in front of you and cliff faces tower behind.

Meet the wildlife of Kangaroo Island

Just off Australia’s mainland on the south coast, Kangaroo Island is reached on a 30 minute flight from Adelaide, so it ties in well with the Great Ocean Road. For me, this is one of the best places for wildlife viewing in Australia, yet it can add quite a bit to the overall cost of a trip, so few visitors are lucky enough to be able to visit.

A region of contrasts, the bright yellow oilseed rape fields and eucalyptus oil distilleries at the heart of the island are ringed by a dramatic coastline, pure white sands and unusual granite rock formations.

I’d recommend spending a night on Kangaroo Island and joining a couple of small group tours. Most of the guides have lived here all their lives and know exactly when and where to find the wildlife. You’ll travel in 4x4 vehicles which enable you to get off the main roads and access the more remote areas.

When I visited Kangaroo Island I was the only person on the tour. My guide and I stopped at a private station where he cooked a delicious, lunch as I ambled around, in awe of the many wild kangaroos hopping about and koalas lazing in the treetops. My guide also took me to Seal Bay, where I walked amongst the seals that have made their home here. I watched adult seals sunbathe on the shore as pups played in the surf.

Visit the national parks of the Top End

An area often overlooked by the first-time visitor is the Top End, the quintessential Australia reminiscent of the Crocodile Dundee films.

Kakadu National Park lies just three hours outside Darwin and, in contrast to the parks of the Red Center, Kakadu has a tropical climate with distinct wet and dry seasons. Heavy rainfall during the wet season leaves a revitalized landscape where waterfalls tumble over sandstone precipices, and saltwater crocodiles, water buffalo and birdlife can be spotted in the water.

The area is also known for its extensive Aboriginal rock art. These paintings are mainly found in Arnhem Land, a reserve still owned by the Aboriginal people that borders the Kakadu National Park.

Arnhem Land can only be visited with a guide who is a member of the local indigenous community. Your guide will explain the dreamtime stories that surround the impressive rock art, and take you to Injalak Hill, a sacred spot from where you’re treated to uninterrupted views of the surrounding floodplains.

Start planning your trip to Australia 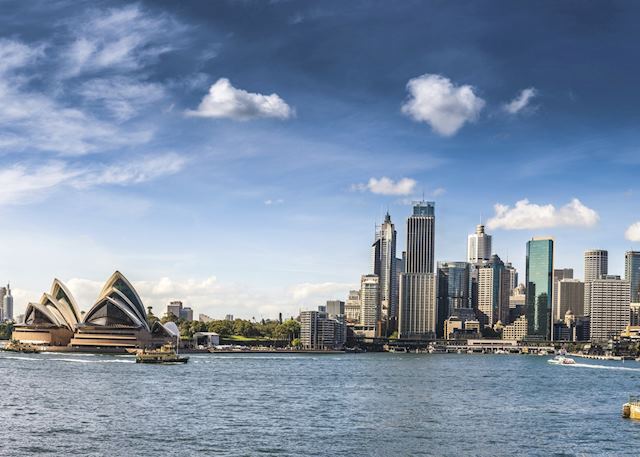