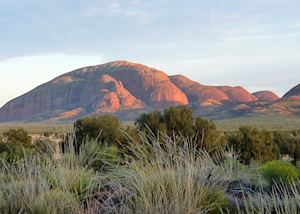 No visit to Uluru is complete without the experience of its sunset, where flamboyant colors are painted over its flank, changing and moving by the second. Rising from the desert, some 30 kilometers from Uluru is Kata Tjuta, named from the Aboriginal word meaning ‘many heads’, its 36 rock domes creating a system of haunting gorges and valleys.