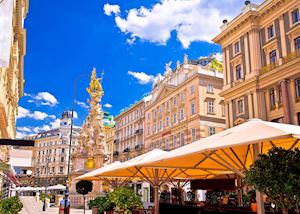 Stroll through the cobblestone streets of the First District as you visit one of Vienna’s many coffeehouses, a prominent feature of Viennese culture. Enjoy a cup of coffee and an apple strudel as you sit in the same café as Sigmund Freud. Or you might head to the State Opera House and listen to the swell of the orchestra, and experience the rich musical history of the city that inspired Mozart, Beethoven and Brahms.

These cafés, many dating back to the late 1800s and early 1900s, have provided inspiration to many people throughout history, including Sigmund Freud, Leon Trotsky and Peter Altenberg. We can arrange for you to take a guided walking Viennese coffeehouse tour to see some of the most important cafés in the city.

The Holocaust Memorial is a solemn concrete monument, its platform engraved with the names of the camps where Austrian Jews were killed. The Memorial Against War and Fascism comprises four statues portraying the atrocities of the war, carved of granite from the Mauthausen concentration camp. You’ll also visit the Judenplatz and Jewish Museum Vienna, museums dedicated to Jewish life in Vienna. 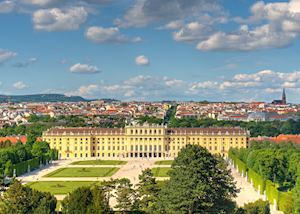 There, you can explore some of the 1,400 rooms inside, including the Billiard Room, which still has its original decor and furnishings. The Herringbone Room features large family portraits of the Habsburgs, as well as parquet flooring and an intricate frieze around the ceiling. You can then head to the UNESCO World Heritage-designated garden, an expansive park that includes a vineyard, a pool and multiple cafés.

Vienna is a year-round destination. The weather is mild, with the warmest months of July and August averaging high 20s °C (80s °F), and even in January and February, the temperatures rarely dip below freezing. In December, the city comes alive with Christmas markets, though walking around may be more enjoyable in warmer months.

Our itineraries will give you suggestions for what is possible when you travel in Vienna, and they showcase routes we know work particularly well. Treat them as inspiration, because your trip will be created uniquely by one of our specialists.