The Cariocas (Rio locals) have a saying: God made the world in seven days, and the eighth he devoted to Rio de Janeiro. Given its oceanfront setting, protected by Guanabara Bay and lounging between sandy shores and forested granite peaks, you might forgive the hyperbole.

Sugarloaf Mountain rises vertically out of the azure Atlantic, while Christ the Redeemer, arms wide open, watches over the city from atop Corcovado Mountain. You’ll find beaches for strolling or watching the locals play volleyball, and the galleries and museums of the arty, bohemian Santa Teresa district. Visiting the vibrant favelas (shanty towns) gains you an utterly different perspective (not to mention great views) of one of South America’s most intoxicating metropolises.

Like many before me, I fell head-over-heels in love with Rio. I was surprised at how much there is to do in this tropical city, from watching live samba to hiking Sugarloaf Mountain and relaxing on the beaches.

Things to see and do in Rio de Janeiro

Christ the Redeemer and Corcovado Mountain

The statue’s iconic stance was not, in fact, the original design: earlier blueprints showed Christ carrying a cross. In the finished result, Christ himself makes the shape of the cross, his outstretched arms signifying a gesture of peace, as if he’s embracing the whole city beneath his feet. Peering up at the 30 m (98 ft) statue from its base, you begin to see the patchwork of weathered greenish-gray tiles covering its surface, and the lightning rods crowning the head like thorns.

Created by French and Romanian sculptors and Brazilian engineer Heitor da Silva Costa, the statue was commissioned by the Catholic Circle of Rio as a response to the ‘godlessness’ of society post World War I. Although Cristo Redentor (as it’s called in Portuguese) can be seen from virtually anywhere in the city, getting up close to the statue reveals otherwise invisible details, such as the outline of a heart bulging from the chest. Just inside the base is a minuscule chapel where multilingual masses are held.

The best way of getting to the viewing platforms below the statue’s pedestal is to take the cog wheel train up through Tijuca, the world’s largest urban forest, on Corcovado. On a clear day, you can look out over downtown Rio and the bay. Yet visiting the statue on a rainy day can be equally rewarding, as the crowds mostly scatter and you have the views to yourself. 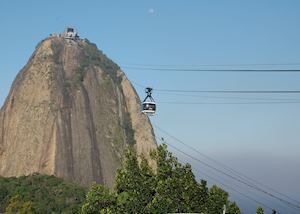 In a city that’s not short of panoramic viewpoints, the summit of this smooth granite monolith at the mouth of Guanabara Bay offers one of the finest. A three-minute cable car journey takes you to the top, from where you can look back at Rio. In the foreground, tropical forest (where several rare orchid species grow) covers the lower part of the mountain, while Christ the Redeemer appears like a tiny stick man saluting you from a distant pinnacle.

From this vantage point, you can see just how much Rio is sliced up by hills and peaks, such as the ridge separating Copacabana and Ipanema beaches. In the day, look out for rock climbers scaling Sugarloaf’s four faces, but the ideal time to visit is sunset when the city becomes bathed in soft amber light.

One of the simplest but most effective ways of getting a feel for Rio is by strolling the promenade of the Avenida Atlântica. This 4 km (2.5 mile) oceanside avenue stretches from the area of Leme, near Sugarloaf Mountain, to the end of Copacabana Beach.

The promenade’s striking Portuguese-style paving runs in geometric waves alongside Leme and Copacabana beaches. The beaches are Rio’s great social melting pot and locals from all walks of life, from the wealthy quarters and the favelas alike, come here to relax. On Sundays, the sand becomes near-invisible under a sea of parasols.

Looking out to the beaches, you’ll see games of volleyball (and soccer-volleyball, a home-grown variant), exercise classes, paddleboarders, sunbathers, surfers and gaggles of children. Groups gather around slacklines hitched up between palm trees. Workout stations are posted at intervals along the beaches. Shacks rent out parasols and kiosks sell coconuts, acai and other fresh juices, as well as the ubiquitous caipirinha (the national cocktail, made with sugarcane liquor and lime), while roving vendors ply the sands touting ice-cold drinks. In the evening, saxophonists and other street musicians set up shop on the promenade.

The Rio Scenarium Club in Lapa

By day, Rio’s Lapa district is a compact, quiet area of restored 19th-century pastel mansions that speak of old Lisbon. By night, it roars into life. These faded colonial façades house bars, traditional barbecue restaurants and clubs that pound with the sounds of samba (and all its variations), bossa nova, Brazilian jazz, reggae from Bahia, and even Brazil’s own takes on rock and pop. The rhythms spill over into the streets, as do the clientele. On a weekend, the area around the Arcos da Lapa, a bright white aqueduct, is closed off to traffic and given over to the party goers and samba bands.

One of the best clubs is Rio Scenarium, a three-decker nightspot-come-antique-store idiosyncratically decorated with clocks, chandeliers, gilt mirrors, bright upholstery and other eccentric touches. It has a mezzanine overlooking the stage area, where musicians play everything from samba to forró. The latter is a fast-paced music style from northeastern Brazil and a striking partner dance involving much skipping and spinning.

These hands-on, breezy classes, held in a traditional restaurant in downtown Rio, are a great way of scratching the surface of Brazilian culture. Your teacher will be a local Carioca who’ll explain all about Rio’s food.

After a brief introduction, you’ll first learn how to make Brazil’s signature cocktail, the caipirinha, using sugar cane spirit, limes, sugar and various fruits. The main course could involve Bahian fish stew (moqueca) or a feijoada (meat casserole). At the end of the class you and your fellow pupils will sit down to eat together.

A rickety tram ride takes you to the top of the hill where this area of colonial old Rio begins. Its cobbled streets and belle époque mansions evoke its fin-de-siècle heyday, when industrialists, rich from Brazil’s coffee industry, moved there in droves. Then, in the 60s and 70s, the area was rediscovered by artists and creatives. Their traces live on in the district’s galleries, studios, handicraft shops and little backstreet bistros.

A number of historic buildings are found here, from an 18th-century convent to a 19th-century castle. The Parque das Ruinas, the shell of a mansion destroyed in a fire, is now a public park that offers some sweeping views over the downtown and bay area.

Climb the steps of the Escadaria Selarón

Covered in a mosaic of deftly painted tiles in the three shades of the Brazilian flag, this celebrated flight of steps is found in Lapa. Its creator, the Chilean painter Jorge Selarón, intended the steps as a tribute to his adopted country and spent years hunting down the scraps of tiles used in their design. Later, he added red tiles to surround the steps, admiring the ‘vivacity’ of this shade. On his death, local people carpeted the escadaria in candles.

The staircase has since been widely embraced by both the local community and the international media, providing the backdrop to many commercials and music videos.

A designated national park, this tropical rainforest is a contender for the title of the world’s largest urban forest. It’s a dense meandering mass of vegetation, home to wildlife including coatimundis and sloths, and exotic flora such a lobster-claw plants and birds of paradise. Shafts of sunlight pierce the tall canopy, lighting up the many hiking trails and walkways that criss-cross the forest. Waterfalls cascade down rock faces and occasionally the greenery gives way to man-made viewpoints where you can look down over the rest of the forest, the beaches, the district of Lagoa, Guanabara Bay and Sugarloaf.

You can explore the forest through guided walks and 4x4 tours which take you to the best viewpoints.

December to February is high season, and although there’s a lot going on (including Carnival) the city can get extremely busy. July and August sees the coolest temperatures. The months of March and April, and September and October, offer clement, sunny weather and fewer crowds, but it’s safe to say that the city can be a year-round destination.

Our itineraries will give you suggestions for what is possible when you travel in Rio de Janeiro, and they showcase routes we know work particularly well. Treat them as inspiration, because your trip will be created uniquely by one of our specialists.

Written by our specialists from their own experiences of visiting Rio de Janeiro, these guides will help you make the most of your time there. We share both our practical recommendations and the best ways to appreciate Rio de Janeiro at its best.

We’ve selected a range of accommodation options for when you visit Rio de Janeiro. Our choices usually come recommended for their character, facilities and service or location. Our specialists always aim to suggest properties that match your preferences.

Our specialists seek out authentic ways to get to know the places that could feature in your trip. These activities reflect some of the experiences they've most enjoyed while visiting Rio de Janeiro, and which use the best local guides. 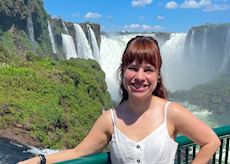