The modern town of Luxor has grown up around the two temples of Luxor and Karnak. The name Luxor is a corruption of the Arabic word "El Qsour", meaning castles or palaces, a reference to these two magnificent temples.

At the Temple of Luxor, the first pylon and courtyard you pass through were additions built by Ramses II. The pylon is an early example of political spin: Ramses II fought the Hittites at Kadesh in an engagement that was at best a pyrrhic victory, and more likely a very costly draw. However through monumental engravings of himself at the head of an army smiting the Hittites, such as on this pylon, Ramses II was able to perpetuate a different story, creating a reputation for himself as a great military ruler. Until fairly recent excavations, a village sat amidst the ruins, raising the ground level to almost completely obscure the temple: a reminder of this can be seen in the mosque and mausoleum of Abu Haggag that was left perched atop the ruins in the first courtyard, now many feet above the excavated ground level.

The oldest part of the temple, beyond the additions of Ramses II, consists of a colonnade, courtyard and sanctuary complex built by Amenophis III, which played an important role in one of the most interesting phases in Ancient Egyptian history. At the time of Amenophis III, Amun was the supreme god in a wide pantheon and his priests were hugely powerful; however his son, Amenophis IV, launched what may have been the first monotheistic religion. Turning his back on the traditional gods, he began worshiping the Aton, the sun's disk, and changed his name to Akhenaton whilst also building an entirely new capital at Amarna, called Akhetaton, or "horizon of the Aton". For a few years this wonderful religion flourished, producing some of the finest art and first humanist portrayals of pharaoh and his court ever seen. On his death however, power and the people returned to Amun, and all traces of the Aton heresy and Akhenaton were assiduously destroyed leaving just a few fragments for us to piece together the story. The new pharaoh, named Tutankhaton at birth by his father, Akhetaton, renamed himself Tutankhamun to stress his return to Amun, and carved scenes on the walls of the Temple of Luxor reaffirming the old religion, before dying and leaving the most intact legacy of any pharaoh in the wonders found complete in his tomb.

The Temple of Karnak is testament to the power, wealth and might which accrued to Amun and his priests. The temple site was developed, built and added to over a period of 1,300 years and is a vast complex of temples within temples, pylons, hypostyle halls and sacred pools which covers 100 acres. At the height of the cult of Amun, controlled from Karnak by the priests, the assets of Karnak included 65 villages, 433 gardens, 412,662 head of cattle, 2395 square kilometers of fields, 83 ships and 81,322 workers and slaves. The priests of Amun were consequently one of the most powerful forces in the land and in times of weak pharaohs effectively ruled Egypt.

To fully understand the temple complex would take years of study and an intimate knowledge of Ancient Egyptian history; given that most visitors don't have this luxury, there are a few key bits of the temple not to be missed. The most impressive part of the temple is the hypostyle hall. Developed from a simple processional colonnade by Seti I and Ramses II, the hall is a forest of columns, 23 meters high and with a girth of 15 meters. The area covered by the hall is larger than Notre Dame Cathedral and would originally have been roofed. Some light would have entered through windows in the roof, illuminating the dramatic colored inscriptions that survive to this day. It is one of the most impressive sights in all Egypt.

Beyond the hypostyle hall is the oldest part of the temple, and two obelisks erected by one of the more interesting figures in Egyptian history. The wife of Tuthmosis II, who was his official queen, did not bear him a son during his lifetime, but was a powerful and forceful enough woman to rule in conjunction with Tuthmosis III, the designated successor, and to completely overshadow him becoming the first woman to rule as pharaoh. Her obelisks at Karnak are beautiful, one partly on the ground, one still erect and the tallest completed obelisk in Egypt. Obelisks were normally tipped with electrum, an alloy of gold and silver; Hatchepsut went one further, extending the electrum halfway down the sides of the obelisk as well.

A series of pylons in various states of excavation extends away from the hypostyle hall, passing the Sacred Lake, and leading to the start of the Avenue of Sphinxes which runs all the way to the Temple of Luxor. Although now largely covered beneath ground built up over centuries, the avenue is exposed at the stretches nearest the two temples and also at various points along its path.

Photos of Explore the East Bank 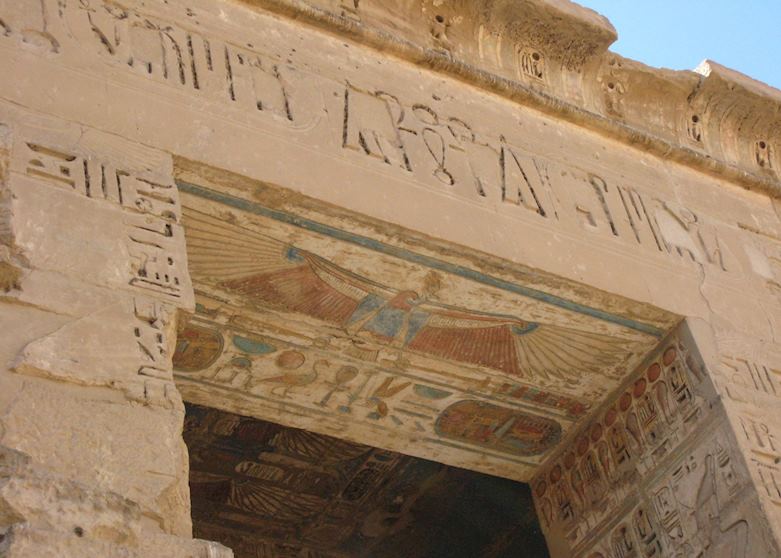 The West Bank at Luxor is known as the Theban Necropolis. This full day excursion will typically include the Tombs of the Theban rulers and the Temple of Hatchepsut.