Soaring obelisks, imposing temples, and the hidden tombs of the Valley of the Kings, all in Luxor, ancient Egypt’s most important city.

Whether you’re admiring a burial chamber’s still-bright paint, sailing down the Nile in a felucca, or wandering among the columns in one of the great temples, Luxor is where ancient Egypt remains most present. This was once mighty Thebes, the seat of the Egyptian pharaohs at their most powerful, and a visit here gives you a chance to appreciate the grandeur of their architecture up close.

The density of ancient sites makes this one of the busiest locales in Egypt, but we can arrange for private guides who’ll help steer you around the crowds and get the best views.

The East Bank — the Temples of Karnak & Luxor 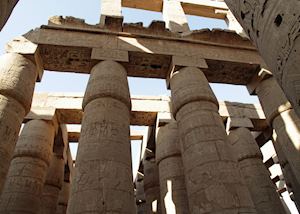 Built over the course of centuries, Karnak is a sprawling complex about as large as 190 football fields. This was the most important site of worship in all of Egypt, a constellation of shrines, obelisks, and courtyards built around the oldest and holiest of temples — the Temple of Amun, considered the earthly home of the god.

Nearby, at the Temple of Luxor, two seated statues and a pink-granite obelisk greet you as you enter a building that was known to ancients as the Southern Sanctuary. Smaller and less complex than Karnak, this was a sacred space, intended for priests and not the general public.

Both sites can get very busy and planning your tour early or late in the day can help avoid crowds. You can also visit at night, when the whole complex is underlit with a golden glow. The hypostyle colonnade in the Luxor Temple is particularly evocative when viewed under a canopy of stars. We can arrange for a privately guided visit to both sites on Luxor’s East Bank.

This is Thebes’ necropolis, a city of the dead located under the horizon where the sun sets every evening. Here, you can explore pharaohs’ tombs that were hidden deep in wadis. Protected from light and looters, some of these tombs have wall decorations as bright as if they’d been painted a few decades ago rather than a few millennia ago. A few, like the burial chamber of Hatshepsut, have been restored to their former glory.

Perhaps the best-known tomb is that of the boy pharaoh, Tutankhamun — Howard Carter’s 1922 rediscovery of the mostly intact tomb, as well as the glittering collection of grave goods, helped ignite a world-wide passion for Egyptology. It’s easy for you to include a stop at King Tut’s tomb on a guided visit to the West Bank.

It’s best to visit Luxor between October and April, when temperatures are still pleasantly warm but not unpleasantly hot.

Our expert guides to exploring Luxor

Written by our specialists from their own experiences of visiting Luxor, these guides will help you make the most of your time there. We share both our practical recommendations and the best ways to appreciate Luxor at its best.

Speak to a certified Egypt specialist to start planning your tailor-made holiday...

Speak to a certified Egypt specialist to start planning your tailor-made holiday...