Luxor, the hub of Ancient Egyptian monuments and a busy town, has developed to cater to the thousands of tourists who pass through.

On the east bank of the river, the town itself is modern and lacking in charm, but it has grown up around the two temples of Luxor and Karnak.

Karnak is the largest temple anywhere in the world, and its scale is typified by the enormous hypostyle hall, a forest of some 134 huge columns that dwarf visitors. 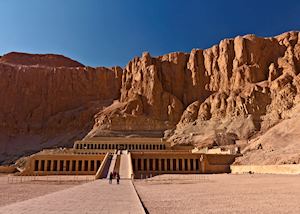 On the West Bank at Luxor is the Theban necropolis, where the people of ancient Thebes buried their dead.

There are a number of funerary temples, which are impressive, but it is the tombs that have brought people here — firstly to rob them, and now to appreciate their elaborate decorations, rich portrayals of the afterlife still vivid and colourful after thousands of years.