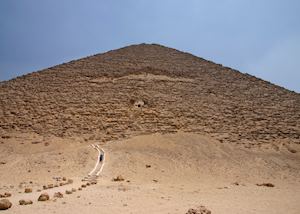 The Bent Pyramid is remarkable in two ways. Firstly the angle of the slope changes abruptly halfway up the face of the pyramid and secondly its limestone cladding is, uniquely among pyramids, almost intact. This gives a very rare insight into how all pyramids must have looked when first built.

Our expert guides to exploring Dahshur

Written by our specialists from their own experiences of visiting Dahshur, these guides will help you make the most of your time there. We share both our practical recommendations and the best ways to appreciate Dahshur at its best.