Within easy reach of Cairo, the pyramids at Saqqara are far less visited than their neighbors at Giza. 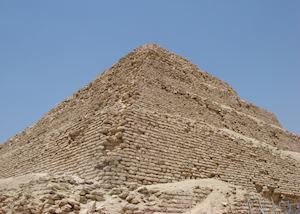 The most important is the Step Pyramid of Djoser, which predates the Great Pyramid of Cheops by about 75 years and marks the moment when the pyramid age began under the architectural aegis of the remarkable Imhotep.

Building on increasingly larger mortuary mastabas for his pharaoh Djoser, Imhotep eventually struck on the idea of a stepped pyramid, and the other larger and more famous pyramids took their inspiration directly from this design.

Our expert guides to exploring Saqqara

Written by our specialists from their own experiences of visiting Saqqara, these guides will help you make the most of your time there. We share both our practical recommendations and the best ways to appreciate Saqqara at its best.