The monumental Abu Simbel complex, the Temple of Philae, and Nubian history and culture, all in Aswan

A tranquil river town just north of the First Cataract, Aswan feels slower and more relaxed than Luxor, making it a great option if you want to unwind at the end of your Nile cruise. It’s easy to spend a few days just strolling through the markets to buy handicrafts or lounging by the pool at your hotel — we suggest the Old Cataract Hotel, where Agatha Christie penned Death on the Nile. However, you can also visit some of ancient Egypt’s most impressive monuments, including Ramses II’s temples at Abu Simbel and the Temple of Philae complex.

The Temples of Abu Simbel

A three-hour drive south of Aswan, the Abu Simbel temple complex is an imposing milestone, comprising two temples built by Ramses II about 3,200 years ago.

The largest and most impressive is a temple dedicated to Ramses II himself. The four colossal statues that guard the entrance are a good measure of the pharaoh’s epic ambition and ego — even seated, they reach 20 m (65 ft) high. Nearby, the Temple to Hathor is smaller and contains a statue of his wife, Nefertari, wearing the garb of the goddess Hathor.

When the dam was built in the middle of the 20th century, UNESCO moved both temples, block by block, to preserve them for humanity — a feat of engineering worthy of Ramses himself. If you’d like to explore, we can arrange a privately guided tour from Aswan. 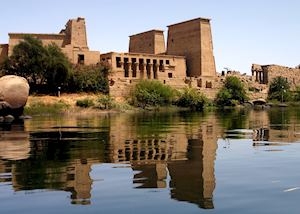 Perched on an island in the middle of the river, the Temple of Philae is a Ptolemaic complex of intricately carved pylons, with two granite lions guarding the main entrance. Dedicated to the goddess Isis, the temple was originally built around 690 BC, making it one of the last classically Egyptian temples.

The construction of the old Aswan Dam flooded the sacred island for six months of the year and the new High Dam would have obliterated it. From 1972 until 1980, UNESCO painstakingly moved it to a higher island, which was then landscaped to look like the original. A tour of Philae can include a chance to travel over the High Dam and to visit the nearby Unfinished Obelisk.

A visit to the Nubian Museum, just across from the Unfinished Obelisk, gives you a chance to explore the Nubian culture. The exhibits trace the long arc of Nubian culture, from one of the earliest advanced human societies, known as the Khartoum Mesolithic, to the ancient Kerma and Egyptian era, and up until modern day.

You can also discover today’s Nubian culture by visiting markets to peruse handicrafts and sample the local cuisine. For a more in-depth look, we can arrange for you to visit a local village. Arriving by boat, you can wander through the souq, with its bright scarves and fragrant spices, and share a cup of mint or hibiscus tea with a local.

The best time to visit Aswan — and all of Egypt — is between October and April. Temperatures then are pleasantly warm but much cooler than during the blistering summer months.

Our itineraries will give you suggestions for what is possible when you travel in Aswan, and they showcase routes we know work particularly well. Treat them as inspiration, because your trip will be created uniquely by one of our specialists.

Our expert guides to exploring Aswan

Written by our specialists from their own experiences of visiting Aswan, these guides will help you make the most of your time there. We share both our practical recommendations and the best ways to appreciate Aswan at its best.

We’ve selected a range of accommodation options for when you visit Aswan. Our choices usually come recommended for their character, facilities and service or location. Our specialists always aim to suggest properties that match your preferences.

Our specialists seek out authentic ways to get to know the places that could feature in your trip. These activities reflect some of the experiences they've most enjoyed while visiting Aswan, and which use the best local guides.