One of the most historic towns on the Mediterranean coast, Acre (‘Akko’ in Hebrew and Arabic) is a walled port city first settled in the Bronze Age. Continuously inhabited since, the old town is now protected as a UNESCO World Heritage Site. Its citadel, mosques and baths date largely from the Ottoman era, while earlier Crusader-era remains sit almost intact both below and alongside.

Once the main port, and later the capital of the Crusader Kingdom of Jerusalem, Acre was internationally renowned and seen as the jewel in the crown of the Levant. Wandering its narrow, weaving streets today, you’ll find a host of historic sites and a timeless Arabian charm.

Such was the strategic importance of Acre in times past that it attracted the attention of everyone from Cleopatra and Herod the Great to the Knights Hospitaller and Napoleon. It was conquered by Alexander the Great and then changed hands several times until, in the 7th century, it fell under the control of the Arab Empire.

The Crusades were the most turbulent era of the town's history, and Acre remains best-known as a Crusader port, but the Mamluks were finally victorious in 1291, and reduced Acre to near ruins. It remained in this state for another 450 years, until an Albanian mercenary, Ahmed Pasha Al-Jazzar, established a virtually independent state in Acre, although it was technically part of the Ottoman Empire. Al-Jazzar brought about the renaissance of the town and port, and it remained in Turkish hands until 1917. 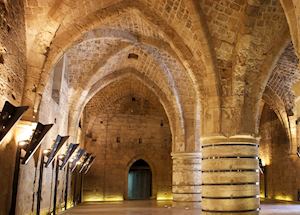 More recent history has seen the town change hands several times again. These days, though, the old town is predominantly populated by Arabs, and its wealth of sights makes it a rewarding destination for anyone with an interest in the history of the region.

The most significant sight is the Citadel of Acre, built on the site of a former Crusader fortress. The original 12th-century Knights Halls were part of a compound constructed by the Knights Hospitallers, a military monastic order that controlled the area and welcomed pilgrims en route to Jerusalem.

The vaulted halls are well preserved and can be explored deep below the towering Ottoman-era citadel, which was built on their ruins. A highlight of any visit is to walk the narrow, 12th-century Templars Tunnel, which offered a secret route between the fortress and the port where the Templars’ compound would have stood.

The city walls also remain more or less intact, and you can walk along the ramparts to Burj Al Kommander, a bastion on the northeastern corner that offers views right over the old city. The English Fort, Burj Al Karim, sits on the northwestern corner, while the Sea Wall Promenade allows access to some parts of the waterside walls.

Descend into the old town to lose yourself in the timeless lanes, visiting the souqs piled high with spices, sticky pastries, leather goods and lanterns. At the northern end of the old city is the el-Jazzar Mosque, its green dome and slender minaret dominating the skyline. Built in a classic Ottoman style with Byzantine and Persian influences, it was constructed over the ruins of a Crusader cathedral and used re-purposed Roman columns in the large courtyard.

Warm, dry weather make April and May and September to November the best times to visit Acre. In mid-summer, the city is hot and humid and peak season prices apply. Winters are generally mild but can be wet.

This sample itinerary will give you an idea of what is possible when you travel in Acre, and showcases routes we know work particularly well. Treat this as inspiration, because your trip will be created uniquely by one of our specialists.

Our expert guides to exploring Acre

Written by our specialists from their own experiences of visiting Acre, these guides will help you make the most of your time there. We share both our practical recommendations and the best ways to appreciate Acre at its best.

Our specialists seek out authentic ways to get to know the places that could feature in your trip. These activities reflect some of the experiences they've most enjoyed while visiting Acre, and which use the best local guides.