With a history dating back over 3,000 years, Jerusalem is a city of unparalleled religious and historic significance. From the Mount of Olives to the Western Wall and the Dome of the Rock, a walk through Jerusalem is a journey through the history of empires. Enclosed within Ottoman walls are some of the most spiritually significant sites for all three major monotheist religions, and no matter what your faith, the sense of history is palpable. Beyond the Old City walls, a modern metropolis with world-class museums and buzzing restaurant and shopping districts unfolds, making a visit here a gastronomic as well as a cultural highlight.

I love Jerusalem because it really blends the old and the new seamlessly. In the modern city, you’ve got museums, the market and excellent restaurants. But right across the street, you can enter an ancient world and it feels like you’re really walking in the footsteps of Jesus.

Things to see and do in Jerusalem

The Old City is a labyrinthine tangle of narrow lanes and streets flanked by ancient sites sacred to Jews, Muslims and Christians. Pilgrims walk the streets while archaeologists search for treasures. You’ll rub shoulders with Orthodox Armenian priests, Egyptian Copts and Ethiopian Orthodox nuns, as well as priests, rabbis and imams wherever you go. The Old City is loosely divided into quarters: the Muslim quarter makes up much of east Jerusalem, while the Christian and Armenian quarters are to the west, and the Jewish quarter to the south. Each has its own distinct character and it’s well worth exploring them all for an overview of this diverse and complex city.

The largest of the city’s four original districts, the Muslim quarter is a network of narrow lanes and alleys lined by Roman and Crusader remains, medieval bathhouses, caravanserai, mosques and markets selling everything from spices and meats to textiles and leatherwork. The further in you explore, the more genuine the experience becomes. The Via Dolorosa, the route believed to have been taken by Jesus to Calvary, starts here, with the first seven Stations of the Cross marked along the way. To the southeast is the Temple Mount, one of the holiest, and most contested sites on Earth, equally venerated by Muslims, Jews and Christians. 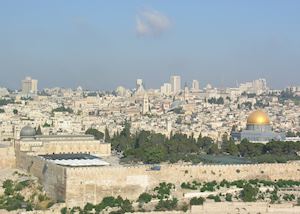 A large, open compound on the eastern edge of the Old City, the Temple Mount was the site of the First Temple, built by Solomon for the Ark of the Covenant. The complex is dominated by the gold-plated Dome of the Rock, a major shrine and city landmark that covers a large stone slab said to be where Abraham sacrificed his son, and, according to Islamic beliefs, where the Prophet Muhammad ascended into heaven. The Al-Aqsa Mosque nearby supposedly sits on the site where Jesus overturned the moneychangers’ tables. The mosque can accommodate up to 5,000 worshipers but is closed to non-Muslims.

Supporting the Temple Mount on the western side, where the Second Temple is believed to have stood, the Western Wall is Judaism’s holiest site. Considered the last remaining part of the Second Temple, it’s a place of pilgrimage and veneration and you’ll see written prayers stuffed between the stones by the faithful.

It’s particularly popular on Friday at sunset for the beginning of Shabbat and the festive atmosphere this entails, as well as for bar mitzvahs. Also, in the Jewish Quarter is the Cardo, Jerusalem’s main street in Roman and Byzantine times. A section of the avenue, 2.5 m (8 ft) below the current street level, has been reconstructed, while another is lined with shops and galleries.

The Christian and Armenian Quarters

One of Christianity’s most important sites, the Church of the Holy Sepulchre sits in the Christian Quarter and is said to mark the spot of Calvary, where Jesus was nailed to the cross and died. The last five stations on the Via Dolorosa are inside the church and crowds have flocked here to pay their respects for centuries. The Christian Quarter is also home to the Citadel, a palace built by Herod the Great, and later used by the Romans, Crusaders and Ottomans. It’s now home to the Museum of the History of Jerusalem. The Armenian Quarter is the Old City’s quietest area, and a good place to experience a more authentic side of the city. 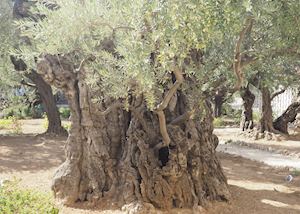 A mountain ridge east of the Old City, the Mount of Olives is a major Christian pilgrimage site and a Jewish burial site dating back 3,000 years. It’s said to have been the place where Jesus ascended into heaven and for Jews, the location from which the Messiah will begin the Resurrection. A Franciscan basilica marks the spot where Jesus is believed to have prayed before being arrested in the Garden of Gethsemane just outside the city walls. Look out for the gnarled olive trees, thought to be some of the world’s oldest. At the foot of the mount is the Tomb of the Virgin, considered by Eastern Christians to be the burial place of Mary, mother of Jesus.

Rising just outside the walls of the Old City, Mount Zion is the highest point in the city. The hill is believed to be the site where the Virgin Mary died and the Benedictine Dormition Church marks the spot. The Cenacle, where the Last Supper is supposed to have taken place, and where the Holy Spirit came upon Jesus’s apostles, is also here. A Jewish shrine, the Tomb of King David, sits below the room, although David is thought to be buried elsewhere. Also on the hill is a Catholic cemetery containing the grave of Oskar Schindler who risked his life to save Jews during the Holocaust. 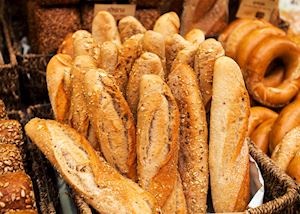 The culinary hub of the city, Mahane Yehuda Market is the most obvious example of the city’s great diversity and a celebration of its shared roots. It’s an intricate network of lanes and stalls piled high with fresh pitta, falafel, halva, figs, olives and dried fruit. You’ll see locals on their daily shop, visitors looking for fresh hummus and tahini, children hoping for a sticky poppy-seed pastry, and elderly men chatting over coffee. By night, the bars, restaurants and cafés are buzzing in a scene that has probably changed little since the market first opened in Ottoman times.

You’ll need at least half a day to explore the extensive Israel Museum, a repository of thousands of years of cultural heritage from the Dead Sea Scrolls to Ottoman statuary, complete synagogues and paintings by Renoir and Picasso. The highlight is the Shrine of the Book, a distinctive, low, urn-like pavilion which houses the scrolls, the oldest biblical manuscripts in the world, and tells their story. If you’re short on time, choose a section of the museum to visit. It’s got everything from displays on Roman bathhouses and Persian prayer niches to a whole section dedicated to Jewish art and life.

A poignant and sober memorial to the six million Jews who died during World War II, Yad Vashem, the World Holocaust Remembrance Center, is an extensive site containing the national Holocaust History Museum as well as a Museum of Holocaust Art.

The main museum is housed in a sunken, ark-like building and houses displays exploring the history of anti-Semitism in Europe and the Hall of Names, which records victims’ names. An eternal flame burns in the Hall of Remembrance, there’s an original cattle car used in the infamous transportations, and a garden commemorating those who risked their lives to assist Jews during the Holocaust.

Jerusalem is a popular destination year-round, but you’ll experience the most pleasant temperatures between April and May and September and November. June to August can be extremely hot, while winter can be cold and wet. If possible, visit midweek for quieter streets and avoid major Christian and Jewish celebrations when large pilgrimage groups tend to visit.

Our itineraries will give you suggestions for what is possible when you travel in Jerusalem, and they showcase routes we know work particularly well. Treat them as inspiration, because your trip will be created uniquely by one of our specialists.

Our expert guides to exploring Jerusalem

Written by our specialists from their own experiences of visiting Jerusalem, these guides will help you make the most of your time there. We share both our practical recommendations and the best ways to appreciate Jerusalem at its best.

We’ve selected a range of accommodation options for when you visit Jerusalem. Our choices usually come recommended for their character, facilities and service or location. Our specialists always aim to suggest properties that match your preferences.

Our specialists seek out authentic ways to get to know the places that could feature in your trip. These activities reflect some of the experiences they've most enjoyed while visiting Jerusalem, and which use the best local guides.