According to the New Testament, Nazareth was Jesus’ childhood home, and today the city is a major Christian pilgrimage site. Traditional markets, tiny carpenters’ and dressmakers’ workshops, 2,000-year-old bathhouses, biblical sites, grand Ottoman mansions and little cafes full of men playing backgammon dot the stone-lined alleyways. They give a very different sense of Israeli life than the bustling streets of Jerusalem or Tel Aviv.

Nazareth is Israel’s largest Arab city, and on first glance, a modern, workaday place with heavy traffic and little allure. After years of neglect however, the city is slowly regenerating and the Old Town is again drawing visitors to explore its backstreets and cafes, as well as the major pilgrimage sites. 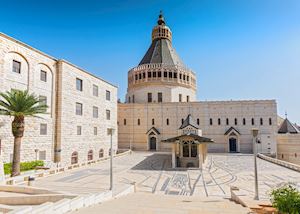 An impressive archeological site, Zippori, was described in the 1st century as ‘the ornament of all Galilee’. It’s hailed as Mary’s birthplace and the home of her parents Saints Anna and Joachim, as well as the birthplace of the Mishnah, the first written codification of Jewish oral law.

Along with a Roman theatre, early Christian churches and a Crusader fort, you can see the well-preserved remains of a synagogue, as well a series of impressive Byzantine mosaics dating from the 3rd to the 6th centuries — the most renowned of which is a 4th-century mosaic, known as the ‘Mona Lisa of Galilee’.

Our itineraries will give you suggestions for what is possible when you travel in Nazareth, and they showcase routes we know work particularly well. Treat them as inspiration, because your trip will be created uniquely by one of our specialists.

Start planning your tailor-made vacation by contacting ​one of our certified Israel specialists...