In the midst of its post-earthquake renewal, Christchurch is a trooper of a city. As such, it’s difficult to say exactly what it will look like when you visit. But, we encourage you to venture here — to witness its innovative approach to rebuilding itself and its ever-developing CBD (central business district), and to explore the wider Canterbury region.

Low-level agricultural fields and pastureland surround the city, and you’ll traverse these western plains if entering or exiting the city on the TranzAlpine train. Meanwhile, to the east, you come to the Banks Peninsula, a volcanic headland, and the genteel, Gallic-influenced town of Akaroa. 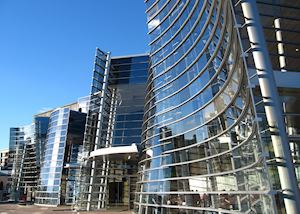 Christchurch’s CBD is a work in progress, so expect to see large-scale construction work going on. It’s all flat and very walkable, and there are calmer pockets. New Regent Street is a pedestrian-and-tram-only mall lined with pastel-shaded, Spanish Mission-style buildings housing cafés and shops. Nearby is interactive Quake City, a museum dedicated to demystifying earthquakes.

Christchurch has always been considered the most English of New Zealand’s cities, and this is reflected in its Anglican churches, English street names, and punts on the Avon River. Close to the CBD are the botanical gardens, where water gardens and exotic shrubs mix with manicured English-style lawns and a rose garden.

A 20-minute drive from the city lies the International Antarctic Centre, where the New Zealand, Italian and United States Antarctic exploration projects are based. You can see exhibits of Antarctic geology and ride on the vehicles used to explore the great white continent. 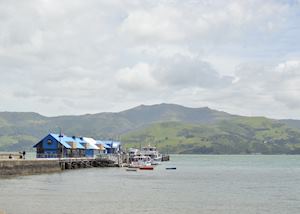 The extensive Canterbury Plains surrounding Christchurch form one of the driest and flattest regions in New Zealand. Their fertile farmland is framed by the snow-topped peaks of the Southern Alps.

The TranzAlpine, which transports you across the Southern Alps to Greymouth on New Zealand’s West Coast, is many people’s entryway to Christchurch. Another rail journey, the Coastal Pacific, also begins or ends here, and you can read about both of these scenic routes in our guide to New Zealand’s best railway journeys.

Southeast of Christchurch there’s Akaroa and the Banks Peninsula. Akaroa is a small town tucked into a bay on a verdantly green headland, the Banks Peninsula, which was formed by volcanic activity 25,000 years ago. You can follow coastal walking trails around the headland, as well as routes through its surviving portions of lowland podocarp forest.

Settled by French immigrants in 1840, Akaroa still has a distinctly Franco-European air, reflected in its historic buildings (one of which is thought to have been prefabricated in France). Among them you’ll find a spate of arts and crafts shops, a venerable 19th-century lighthouse, a swimming beach, and a museum recounting the town’s history. You can also go on dolphin-watching cruises, during which you might spot a rare species, the Hector’s dolphin.

November (in New Zealand’s springtime) brings warm weather and is less busy than the summer months, though Christchurch can be windy. We also like visiting in the temperate months of March and April, even if the Easter period can draw larger crowds.

Our itineraries will give you suggestions for what is possible when you travel in Christchurch, and they showcase routes we know work particularly well. Treat them as inspiration, because your trip will be created uniquely by one of our specialists.

We’ve selected a range of accommodation options for when you visit Christchurch. Our choices usually come recommended for their character, facilities and service or location. Our specialists always aim to suggest properties that match your preferences.

Our specialists seek out authentic ways to get to know the places that could feature in your trip. These activities reflect some of the experiences they've most enjoyed while visiting Christchurch, and which use the best local guides.