Sandwiched between and even spilling up onto brownish, triangular Andean mountainsides, Cuzco has worn many masks in its 3,000-5,000-year-old existence. First inhabited by the pre-Inca Killke culture, it became a thriving imperial capital whose streets were (almost literally) paved with gold under the Incas. It acquired new rulers in the form of the conquistadors, who constructed their own city on top of the Inca foundations.

Today, it has a bit of a cosmopolitan swagger, and acts as a busy launchpad for exploring Peru’s Sacred Valley, Machu Picchu, and for day hikes into the surrounding mountains. But, a Cuzco of times past still lingers in the quiet backstreets, churches and museums. 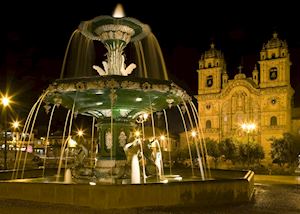 Walking around today, you’ll see conquistador-era buildings resting upon intricately interlocking Inca stonework. The Incas’ enduring masonry is due to their use of mortise and tenon joints (examples of which you can see at the Koricancha, the former sun temple ― more on that shortly). A good place for observing the stonework is in the high walls of a street called Hatunrumiyoc, a couple of blocks away from Plaza de Armas, the city’s main square. One stone here has as many as twelve sides, and once formed part of an Inca palace.

A short walk away, the Koricancha can be quite an illegible building. At first you think you’re walking into the balustraded courtyard of a Dominican monastery, but then you see how it’s inter-spliced over and on top of Inca blockwork. Go into its grassy gardens, and you’ll see how the Dominican church bulges out on top of an Inca rampart. Models and signs indicate where a huge golden disc (for reflecting the sun) may have stood.

Streets in Cuzco’s old town spider out from the Plaza de Armas, an airy square that’s fronted by the grandiose city cathedral, the Iglesia de la Compañia de Jésus (the Jesuit church) and some houses bearing Spanish colonial wooden balconies. Built with stones pilfered from Incan palaces and temples, these places of worship contain their own curiosities.

In the cathedral, you’ll see the statue of the white-robed, black-skinned El Señor de los Temblores (Lord of the Earthquakes), Cuzco’s patron saint, and La Linda (the Beautiful One), a gold-cloaked Madonna. Both are paraded around the city at the feast of Corpus Christi ― believed to be a sanitized, Catholicized version of the original Inca custom of parading mummies around the main plaza.

Meanwhile, in the Jesuit church are paintings from the Cuzco School, including a work depicting the ‘marriage’ (quote marks intentional ― the painting may be a piece of Jesuit propaganda) of an Inca princess to Spaniard García de la Loyola. 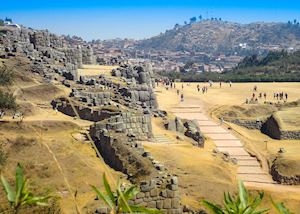 To get a feel for the layout of the city, visit the ceremonial-grounds-cum-fortress of Sacsayhuamán — begun by the Killke and thought to have been the head of the puma shape that informed the Incas’ design of Cuzco. This behemoth of three-tiered walls contains some of the biggest blocks ever seen in Inca architecture, slotted together without mortar. Quite how they got there in the first place is a mystery: we think this makes the site a rival to, say, the pyramids of Giza in terms of engineering.

The rows of toothy, precision-carved volcanic rocks overlook the terracotta roofs of the city, but it’s only one of several Inca ruins that lie just outside Cuzco. On a guided walking tour, you can also take in Tambomachay, a water temple, Puka Pukara, thought to have been a latter-day Inca checkpoint, and Q’enqo, a calcareous outcrop with a sacrificial altar hidden inside.

Cuzco has garnered a reputation as one of Peru’s culinary jewels. Restaurants serve all kinds of Peruvian signature dishes, from cuy (guinea pig) to quinoa soups, ceviche and alpaca steaks. A food tour is a great way to experience the city, but you can also take cooking classes, and visit San Pedro Market to see local produce on display in all its variety. You can find out more in our guide to standout food experiences in Peru.

Away from the Plaza de Armas, the city splinters into various districts. One of our preferred places to wander in the day are the hillside cobbled streets of San Blas, a refuge for the city’s craftspeople and purveyors of religious art and antiques. Museum-wise, you’re a bit spoiled for choice: we like the Museo Machu Picchu, where you can see objects excavated from the site, the Pre-Columbian Art Museum, and the ChocoMuseo, an interactive space dedicated to cacao.

Cuzco is a good start point for hikes into the Andes (such as Huchuy Qosqo, discussed in this guide to Peru’s best non-Inca Trail hikes), mountain biking, white-water rafting, and some day trips into the Andes. It also often tops and tails trips to the Sacred Valley and Machu Picchu.

Time your stay for between May and September for the finest weather and least chance of rain. Be aware, though, that due to the altitude (Cuzco sits at 3,400 m (11,150 ft)), there’s usually a chill in the air come evening.

Our itineraries will give you suggestions for what is possible when you travel in Cuzco, and they showcase routes we know work particularly well. Treat them as inspiration, because your trip will be created uniquely by one of our specialists.

We’ve selected a range of accommodation options for when you visit Cuzco. Our choices usually come recommended for their character, facilities and service or location. Our specialists always aim to suggest properties that match your preferences.

Our specialists seek out authentic ways to get to know the places that could feature in your trip. These activities reflect some of the experiences they've most enjoyed while visiting Cuzco, and which use the best local guides.