If you’re a food enthusiast, you’re probably aware of how much Peru has been fêted on the world food scene. As a food lover myself, I’ve been following the rise and rise of its culinary star for years. (And, it’s not all about the Michelin-starred restaurants). It’s about getting a feel for Peru’s everyday organic, farm-to-table food, too — whether that’s by visiting a local market or taking a cooking class.

I’ve selected experiences that you can all tie in easily with this suggested culinary-themed tour of Peru. 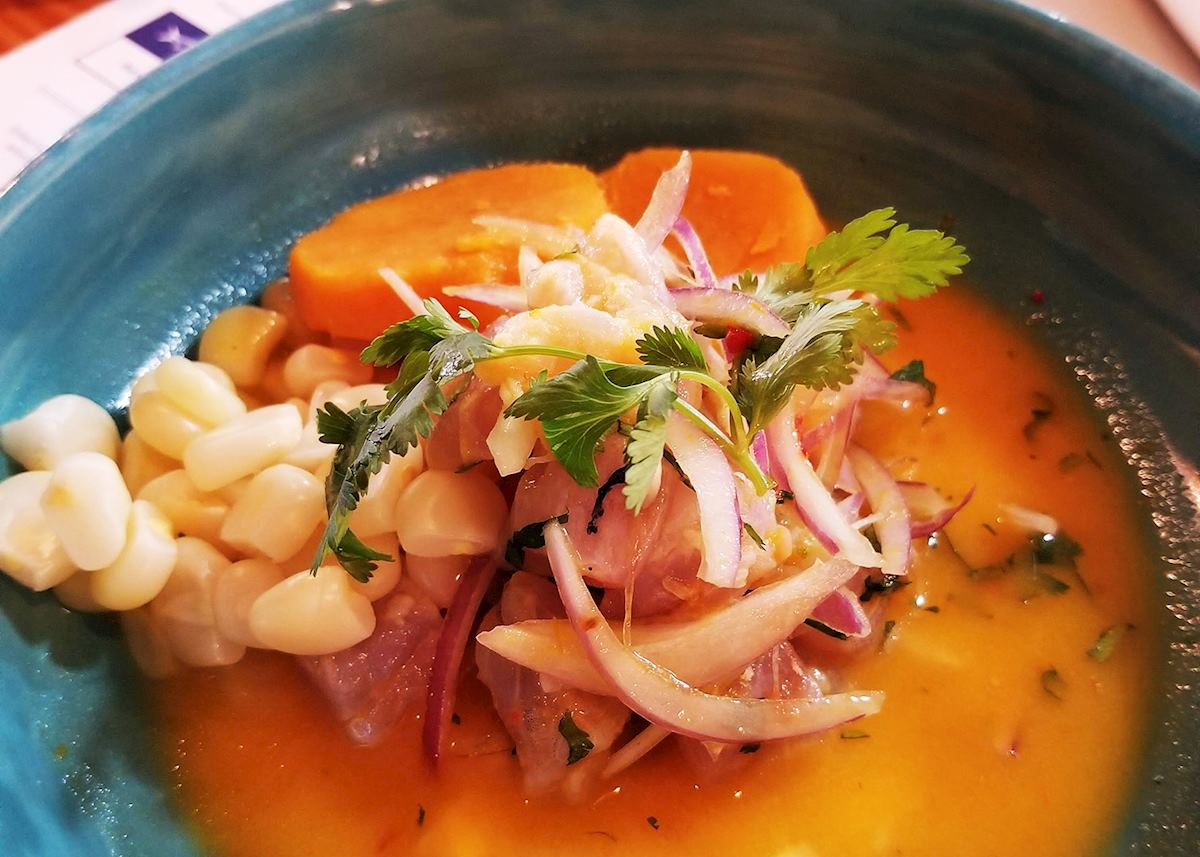 The mouth-tingling zing of the lime juice, the kick of aji amarillo (Peruvian yellow chilli), the delicacy of the white fish, the jaunty sprigs of coriander (cilantro) — there’s so much to love about ceviche.

You’ll run into Peru’s signature dish all over the country, even inland (despite what Lima dwellers might say). I urge you to try it, even if the word ‘raw’ puts you off (in reality, the fish is cured).

In Lima, my address of choice is Chez Wong. It’s in an unassuming apartment building, and you actually dine in head chef Javier Wong’s living room. The waiter asks you whether you’d like a cold or hot dish (there’s no menu).

Then, you watch Wong at work in the open kitchen, flaying sole or sea bass (his preferred fish for ceviche), chopping onions, and preparing the marinade. Anthony Bourdain’s picture hangs on the wall (he was a fan of this place, too), and your handful of fellow diners come from all walks of life: expect local bureaucrats and tradespeople alike.

In Cuzco, I like Barrio de Ceviche, an open-air restaurant that sits directly on the Plaza de Armas (main square). You have the option to sit at the chef’s table, so you’re right in the heart of the kitchen action, if you like that kind of thing. Here, you might find ceviche made with trout, which is more locally available.

One tip: Peruvians view ceviche strictly as a lunch dish, so be prepared for confused looks if you order it for dinner (but there’s no reason why you can’t). 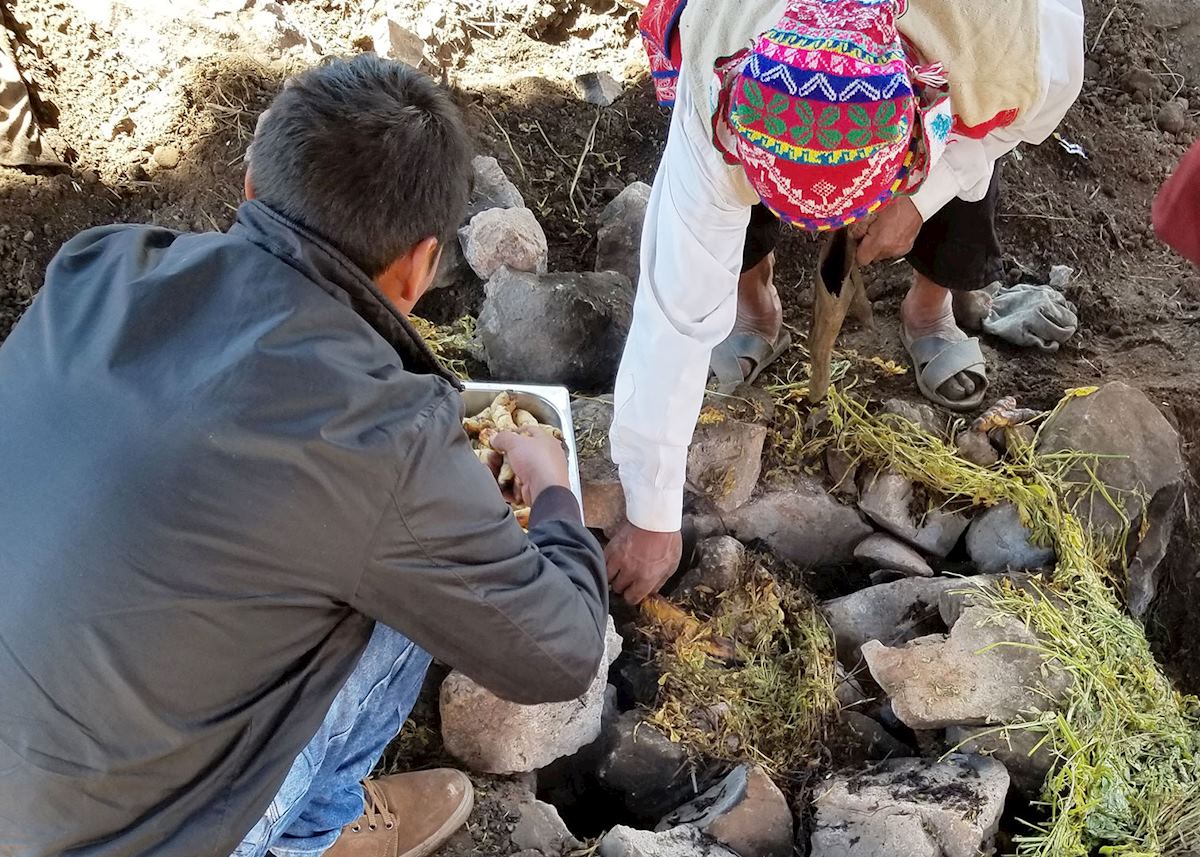 Meaning ‘earth pot’ in Quechua, this is a classic high Andean dish where vegetables (including squash, potatoes, and lima beans) and meat (often chicken or lamb) are laid over and in-between hot stones.

They’re covered with spices and, sometimes, dry grass then cooked in the ground. Much like a Maori hangi or Hawaiian imu, it’s real hearty salt-of-the-earth food, sometimes eaten for special occasions and community or family gatherings.

One of the finest pachamanca meals I’ve eaten was while walking the Salkantay Trek, one of the best hikes in Peru. But, you needn’t embark on a multi-day odyssey: there’s a highland community near Ollantaytambo (where you catch the train to Machu Picchu) that serves up a great pachamanca, but you’ll find this dish all over the Andes.

It’s a whole-day experience, but one that feels intimate and low-key rather than disingenuously made-for-tourists. You go to Huilloc where your guide talks you through weaving traditions (and teaches you some Quechua), before you sit down with the villagers for a pachamanca meal that has been steadily smouldering for hours. 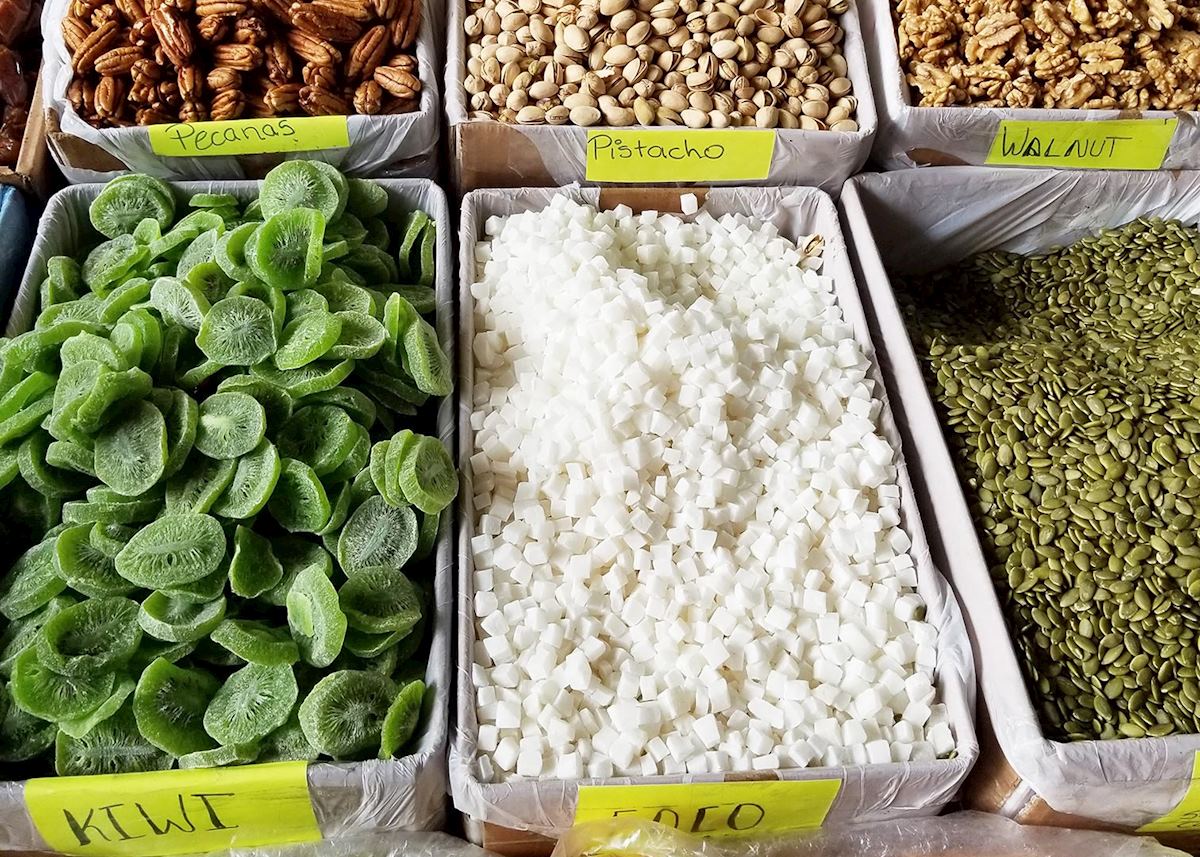 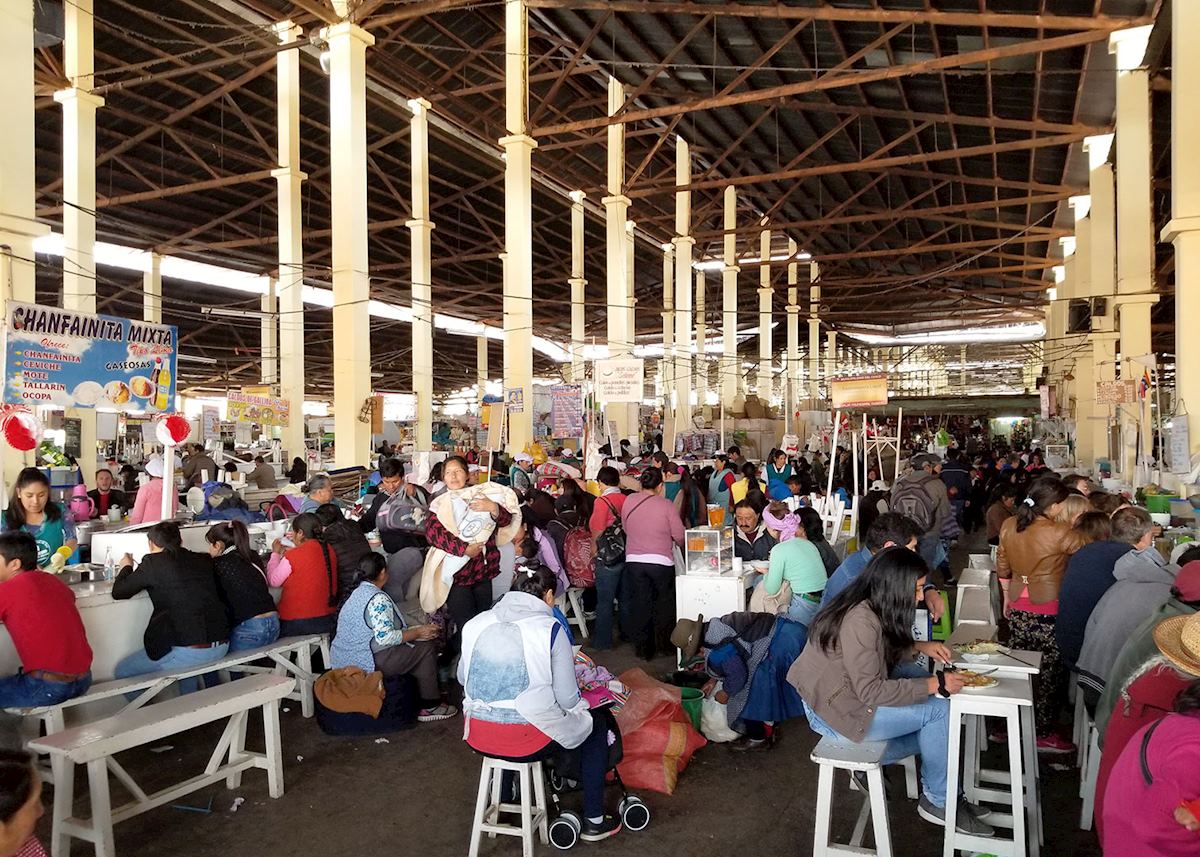 Local markets can be great ambassadors for Peruvian produce and street food, but some are more authentic than others.

I’m a fan of San Pedro Market in Cuzco, which is only a short walk from the Plaza de Armas. Its contents are encyclopaedic — everything from alpaca jumpers to cut flowers and coca leaves — but the foodstuff is a real highlight.

I love the fresh-fruit smoothies. You simply ask the stallholder to make one using whatever ingredients are to hand. You could go for mango, passionfruit, grenadine, or banana. Better still, try something you won’t see outside South America, like lúcuma (a yellow-fleshed fruit with a maple-like sweetness).

It’s also a good place to lunch on some signature Peruvian fare, such as lomo saltado (stir-fried beef). This dish is a great example of the chifa (Chinese-influenced) school of cooking in Peru. Your marinated strips of sirloin are served in soy sauce and vinegar alongside French fries and sometimes rice. If you go to the market in the morning, you might see workers breakfasting on it. All that starch sets you up nicely for the day, so the thinking goes.

My other go-to market in Peru takes place in the open air on Sundays in Chinchero, a town in the Sacred Valley. You can wander among sellers laying out their wares on blankets while jostling with Andean farmers bartering their donkeys and alpacas for big bags of potatoes.

I recommend visiting these markets with a private, local guide, who can lead you to their preferred stalls and the choicest dishes.

Peru’s gourmet restaurants in the capital and Cuzco 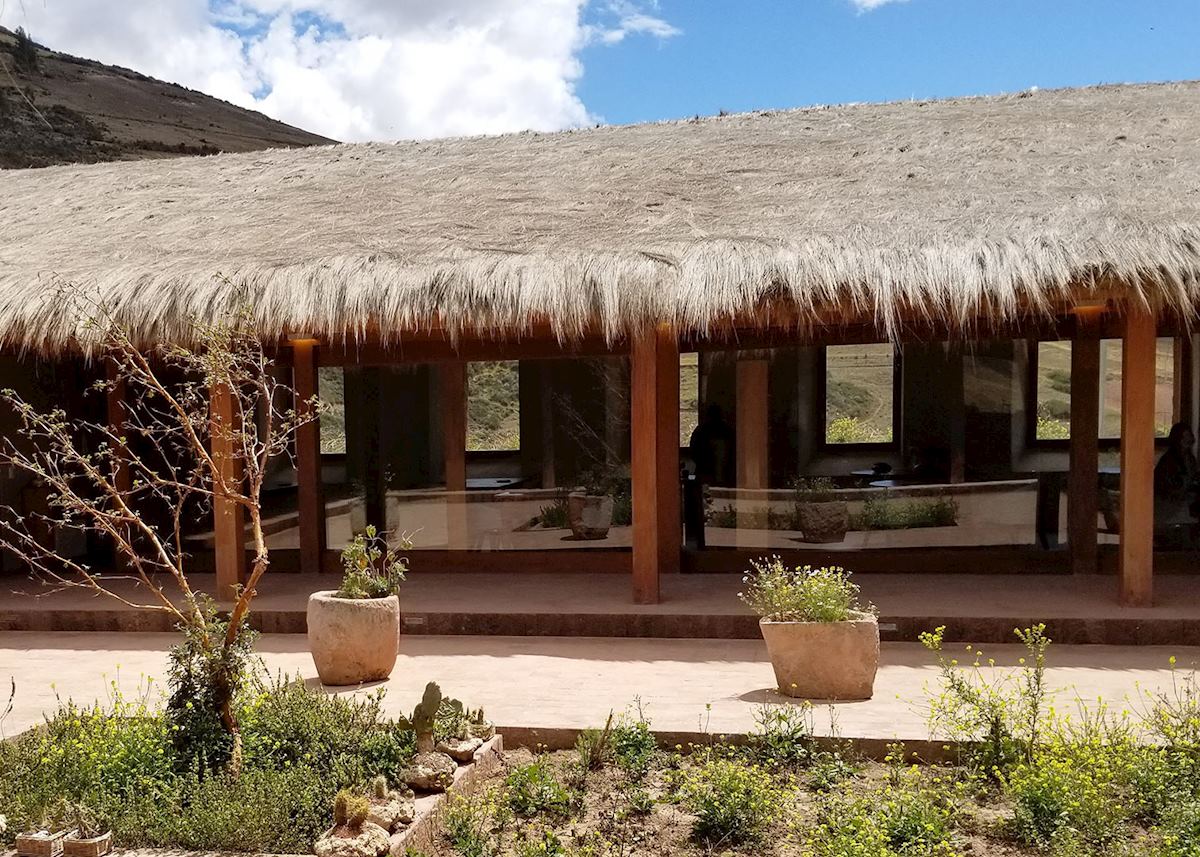 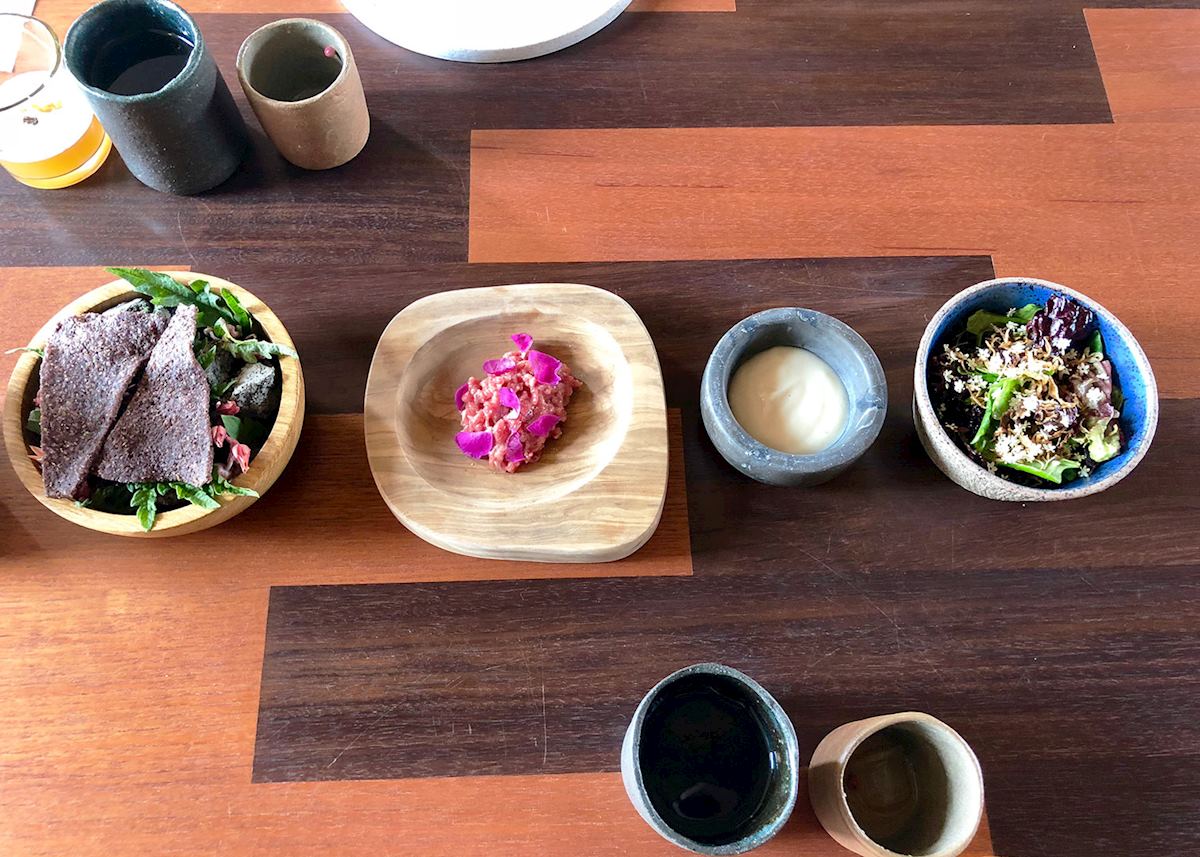 Peru’s fine-dining scene has blossomed. Lima has a clutch of restaurants that regularly rank high on ‘world’s best restaurants’ lists. Some are even in the top ten.

What I love about them all (apart from the food) is that dining at such establishments in Peru doesn’t come with the formality that accompanies such experiences elsewhere in the world. These places are very relaxed, and don’t have a strict dress code.

Central, a Michelin-starred restaurant run by Peruvian prodigy Virgilio Martínez, takes you via a 17-course tasting menu on a gastronomical tour through all Peru’s elevations, from sea level to 4,877 m (16,000 ft) above it.

I’d also point you toward ámaZ, which showcases the food of the Amazon (such as brazil-nut-crusted paiche, wild boar, and lots of dishes using medicinal rainforest plants).

To get a taste of a range of the top restaurants, you can sometimes visit them as part of a small-group culinary tour of the city (your specialist will help you choose one to suit).

Outside Lima, there’s Mil, Virgilio Martínez’s establishment overlooking the Inca site of Moray, a neat bowl of terraces burrowing into a mountainside in the Sacred Valley.

It’s an appropriate setting, as the Inca are supposed to have experimented with growing crops at different elevations here. Martínez’s menu similarly focuses on dishes made using exclusively locally grown ingredients cultivated at different altitudes.

You can easily combine lunch at Mil with a visit to Moray, or perhaps end up here as your reward for a morning’s mountain biking in the Sacred Valley. 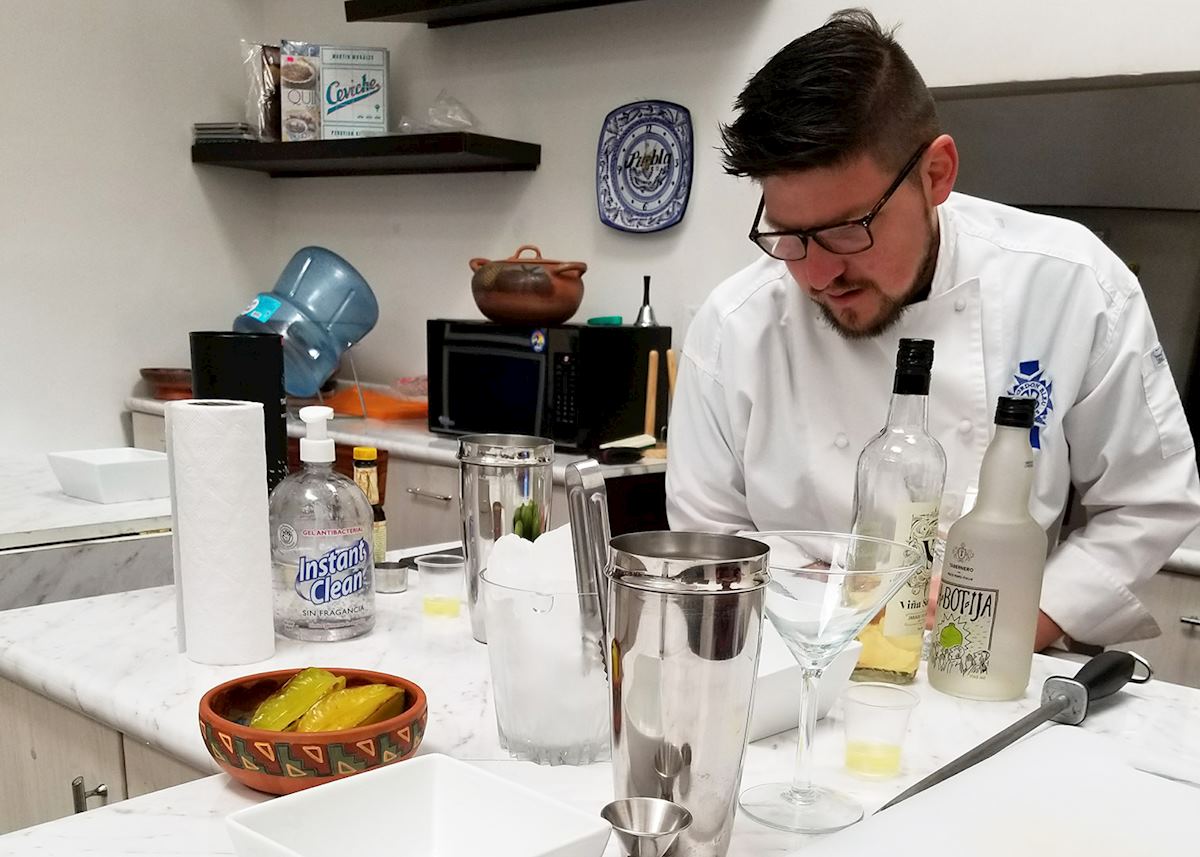 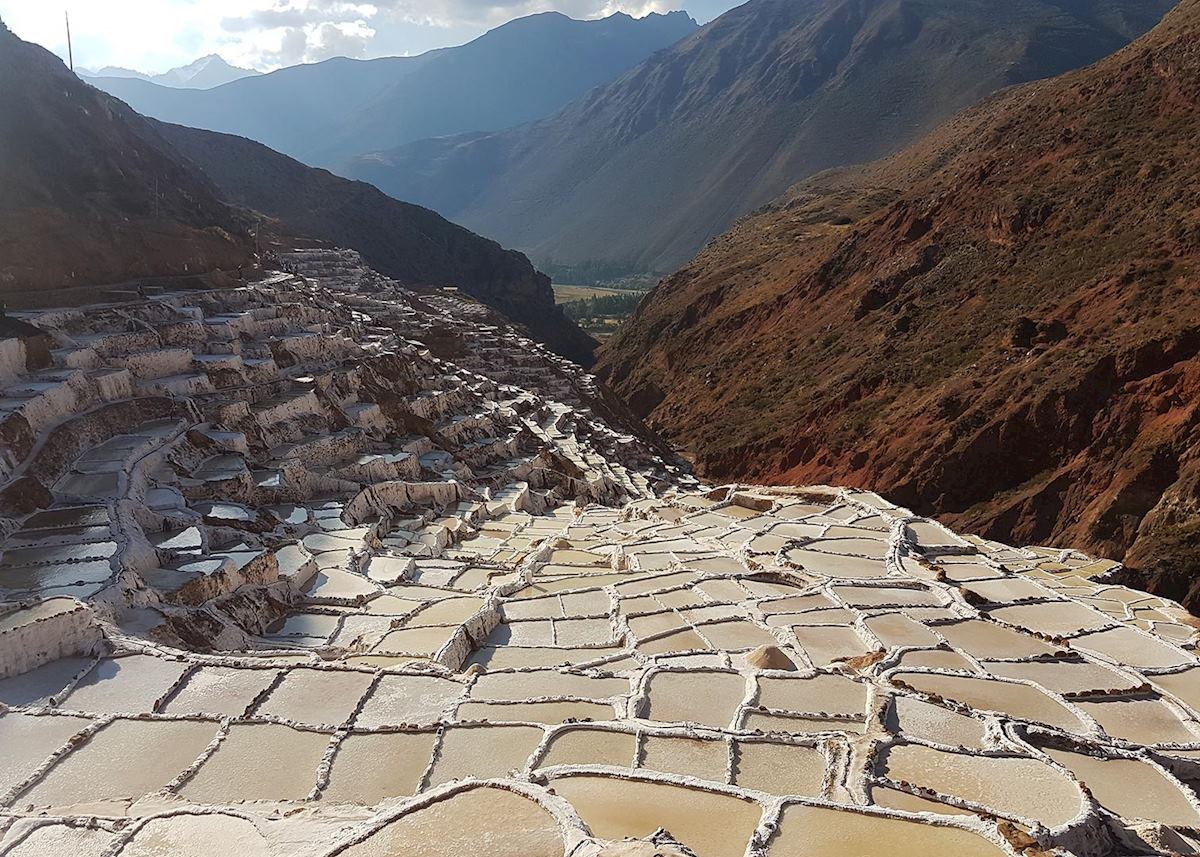 The best cooking class I know of takes place in Cuzco with a young, softly spoken chef called Christian. He’ll meet you at San Pedro Market, and you’ll go shopping together for ingredients, before heading back to his cookery school to begin your lesson.

His menu changes seasonally. But, as an example, you might make three different types of ceviche, then tamales with quinoa, then his take on lomo saltado, followed by a dessert.

You could, alternatively, try a Cuzco-based street food tour. After being introduced to roast guinea pig at a restaurant, your guide takes you to a handful of small eateries and unpretentious stalls that you might easily miss on your own. You’ll be encouraged to try their wares, which range from anticuchos (beef heart kebabs) to emolientes (spiced herbal teas).

Finally, for a touch of glamour and a real one-off experience, I always suggest you follow up a more traditional city tour of Cuzco with a gourmet al fresco picnic.

You’re driven to a scenic spot outside the city, which might be Sacsayhuaman (the zig-zagging ruins of an Inca fortification), the hills overlooking the salt mines of Maras, or the teal waters of Lake Huaypo. Here, you sit down to a multi-platter tented lunch provided by Cicciolina, my preferred restaurant in Cuzco.

My tips for making the most out of Peru’s food 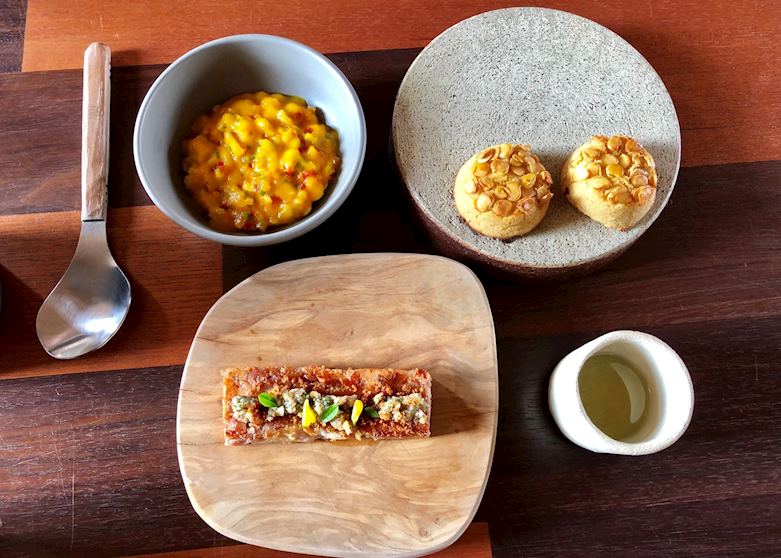 What to do in Peru: our highlights guide Visit Machu Picchu: A first timer's guide Trekking to and around Machu Picchu