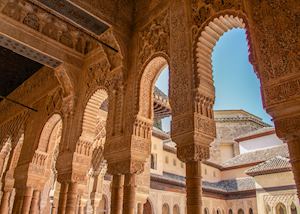 A gilded screen separates the chapel from the main church. Behind it lies the Gothic mausoleum, which contains two enormous Carrara marble tombs. There’s a small museum in the sacristy, which contains Ferdinand’s sword and Isabella’s scepter and crown, as well as art from their personal collection, including work by Botticelli.

May to June and September to October are good times to visit Granada, as the pleasantly warm weather makes it easy to explore the city on foot. In July and August, temperatures can reach 32°C (90°F). The winter months are quieter but can be much cooler within the walls of the palace.