Rising from the rock at the point where the outcrop falls away, the Alcázar (palace) wouldn’t look amiss in a Grimms' Fairy Tales illustration. It’s the latest incarnation of a fortification that has held the position since the Roman occupation. The current rendering is relatively new-built, a restoration of the medieval version that burned down in the mid-1800s. A multi-sized assortment of slate-roofed turrets point into the air like fireworks and give the Alcázar a distinctly Bavarian air. 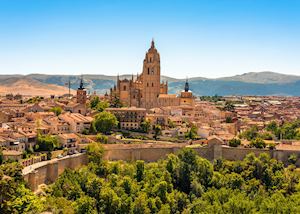 Temperatures in Segovia start to rise to comfort levels around March time. May and June are particularly good times to visit, at a point in the year when the city has warmed up but isn’t under the cloying heat of high summer. The heat continues to ramp up until August, when it can be stifling with peak temperatures above 30°C (85°F). September marks the turning point of the year, when the mercury drops to make it a pleasant time to visit through until the end of October. Segovia’s winter months normally keep bright skies but are chilly and require you to warm up in the day and evening.