One of southern Spain’s great Moorish cities, Seville is at once a fresh-faced, modern city and Andalusia’s elder statesman, its landscape and culture strongly influenced by the 1929 and 1992 expos that took place here. Seville can flaunt relics from its beginnings back in Roman times, through its years under Muslim rule and beyond into its Christian nearer past.

The Catedral de Sevilla holds court in a plaza just a short hop from the city’s Alcázar (palace), a royal complex of rooms and gardens that hides modestly behind terracotta walls. Leading off from the cathedral, Seville’s old Jewish quarter, Santa Cruz, takes you into a tightly knitted district where white and yellow fronted buildings shade the cobbled lanes, tiny bars take over plazas and you can watch daily performances of Seville’s signature dance at the Museo del Baile Flamenco.

Walking around Seville reminds me of strolling through a Moroccan medina, with its narrow, shady streets and whitewashed buildings. And, of course, it’s the best place to see flamenco.

Things to see and do in Seville

As ostentatious as Liberace and an ode to Seville’s Moorish architecture with a hint of Venice and the Art Deco style of the day thrown in, the Plaza de España is an unabashed pastiche. There’s more than an element of fakery behind the building designed to be the showpiece for the 1929 Ibero-American Exposition, which Seville hosted. 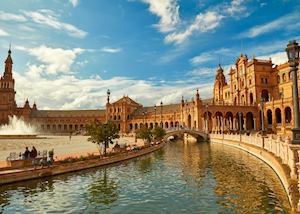 The semi-circular colonnaded complex, bookended by two towers and fronted by a Venetian-inspired canal with rowing boats to hire, has played film set for David Lean’s Lawrence of Arabia and the Star Wars franchise. Today, it houses government buildings.

The plaza is part of the wider Parque de María Luisa, a park gifted to the city and its people in 1893 by the Infanta Luisa Fernanda, Duchess of Montpensier. The green space was refashioned for the expo and is a shady place to decamp if you want to avoid the hotter parts of the day. Stroll, cycle or tour the tree-lined avenues by horse and carriage.

Seville’s cathedral is a harmonious if hulking hybrid of the Moorish and Gothic. Formally named the Catedral de Santa María de la Sede, it stood as a Muslim place of worship for a brief stint before its conversion to Christianity. The original mosque was felled by an earthquake, leaving behind a courtyard that is filled with orange trees and a bell tower. The rest was torn down to make way for today’s Gothic edifice.

But, in the Giralda, the mosque’s surviving minaret, the cathedral can claim one of Spain’s greatest examples of Islamic design with its interplay of brickwork patterns, horseshoe arches and balconies. You ascend the bell tower (via a door inside the cathedral) to city-wide views, not by climbing a succession of steps but by walking up a series of ramps, purpose built to accommodate the Imam going up on horseback five times a day to sound the call to prayers.

Inside, you can contemplate the scale of the tomb of Christopher Columbus. It isn’t conclusively proven to hold his remains, but the city is very proud of their perceived legacy and the bronze sculpture of four bearers in heraldic dress carrying the casket is a worthy repository of his bones.

A royal residence for the Spanish monarchy to this day, Seville’s Alcázar (palace) is a complex of rooms and courtyards matched by the scale and design of its gardens. The complex is widely regarded as one of the country’s best examples of Mudéjar-style architecture. Mudéjar means ‘the left behind’ and it refers to the Arabs who stayed after the Christian reconquest.

The Alcázar was built at about the same time as Granada’s Alhambra, using the same artisans and architects, which you can see reflected in the similar design cues: graceful columns around an airy courtyard, arabesque arches, and abstract geometric patterns repeated and reflected until they create a lace-like impression. Despite this similarity, however, the palace was commissioned by Seville’s Christian rulers, creating a visual example of the complex blending of cultures that has long shaped the country’s landscape.

The Alcázar basks behind deceptively fortress-like walls, just across the way from the cathedral. Once inside, you move from one palace within a palace to another, stepping architecturally from Islamic to Mudéjar, Gothic to Renaissance within a complex that’s always at peace with its many styles. The Alcázar stood in for the Water Gardens of Dorne in the Game of Thrones series.

The gardens beyond are a sequence of outdoor rooms, watered by fountains and raised pools. The planting of palms, cypresses, myrtles, mulberries, magnolias, and orange and lemon trees relies heavily on symmetry and order. Citrus hangs in the air in spring when the orange trees shed their fruit.

The city’s old Jewish quarter incorporates the cathedral and Alcázar, and as you turn your back on them you enter a mesh of lanes too slender for cars to navigate. When Ferdinand III ended Seville’s Moorish rule in 1248, he segregated the Jewish population here, and they lived within the area’s labyrinth of lanes and hidden squares.

The district also hides the Casa de Pilatos. The palace had an ignominious start, built on land seized from a Jewish family by a governor of Andalusia as his own. It’s now credited as one of Seville’s finest grand houses, with a garden to match, built in the style of the Alcázar.

The proud, impassioned art of flamenco took flight in the cosseted courtyards of Triana, Seville’s Roma community. You’ll come across Seville’s home-grown artform, which unites guitar music, song and dance, quite unexpectedly, performed by buskers on the streets. More authentic, perhaps, and certainly more intimate, are the shows in the tiny theaters tucked away in Seville’s Triana Market. By night, it becomes an intimate setting for watching flamenco shows.

The Museo del Baile Flamenco (Flamenco Museum) in the Santa Cruz district stages its own performances and prides itself on drawing a local crowd as well as passing visitors. It will give you a grounding in this enigmatic dance, and how it journeyed from a folk art to the cultural hallmark it has become.

The wide Guadalquivir River cuts a straight course through Seville, splicing the main city from the district of Triana. On the east bank, you can stroll or cycle along the broad promenade watching rowers on the river and breaking every so often at a café or landmark, such as the Torre del Oro. The octagonal tower was the swansong of Muslim-era building in Seville and is reputed to have once been covered in gilded tiles, hence the name ‘Tower of Gold’. Another, more mundane, explanation is the golden tint of the building reflection in the river at sunrise and sunset.

On the other side of the Guadalquivir is the waterfront of Triana with its market and tapas bars. Once the locality of Seville’s Roma community, Triana is still associated with flamenco, which is said to have originated in the district’s close-knit family courtyards. The city’s brick and ceramics works also stood here, making use of clay scooped directly from the river. This past industry is commemorated by a group of small museums and plaques and the aptly decorative façades of some of the now defunct tile workshops.

Spain’s lightly fortified wine, sherry, hails from the ‘Sherry Triangle’, demarked by the cities of Jerez de la Frontera, El Puerto de Santa María and Sanlúcar de Barrameda. A purely urban enterprise, sherry production takes place in bodegas. You can to visit one of the many producers to see how the drink is made, starting with a base that straddles the driest and sweetest white wines.

Often served alongside a glass of sherry, jamón Ibérico is a salty, complex cured meat that’s made from the haunches of Iberian black pigs. This ancient breed is raised across the peninsula, usually roaming freely and feeding on acorns in the oak-dotted pasturelands, giving the meat a wild, woodsy taste. We can arrange for a day-long trip from Seville to the Andalusian town of Jabugo, so that you can visit these remarkable pigs and see the long process of creating this artisanal delicacy. We can also arrange sherry or jamón tastings for you in Seville.

Seville is a year-round destination, though it can get hot and dry in July and August. The weather is cooler and wetter from December through March, but not so much as to impede a visit. The best time to go is April and May or September to November.

Our itineraries will give you suggestions for what is possible when you travel in Seville, and they showcase routes we know work particularly well. Treat them as inspiration, because your trip will be created uniquely by one of our specialists.

We’ve selected a range of accommodation options for when you visit Seville. Our choices usually come recommended for their character, facilities and service or location. Our specialists always aim to suggest properties that match your preferences.

Our specialists seek out authentic ways to get to know the places that could feature in your trip. These activities reflect some of the experiences they've most enjoyed while visiting Seville, and which use the best local guides.