The largest and most populated island of the Cooks — though not, by any standards, crowded — is Rarotonga. Volcanic, it rises 4,500 meters from the ocean floor, and although you can drive around it in just half an hour it takes a great deal longer to cross the mountainous interior.

There are plenty of ways to explore the island: four-wheel-drive is the easiest. Cross-island treks, with trails passing the island’s most dramatic peak, Te Rua Manga, or ‘the Needle’ are also a firm favorite. 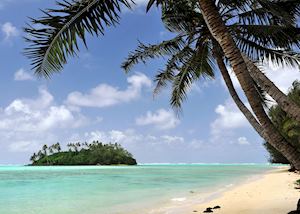 To sea, dive boats and catamarans explore the Pacific in all its glory: an exciting world of giant pelagics and multicolored shoals of reef fish on every side.

Often these are followed by the island’s tantalizing tropical fruits — pineapples, pawpaw (papaya) and bananas, which are also the prime elements of the refreshing island breakfast.

Speak to a certified Cook Islands specialist to start planning your tailor-made vacation...