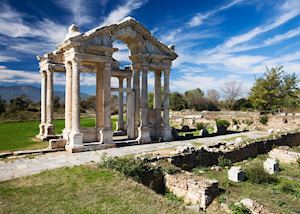 Pamukkale’s travertine terraces, with their semi-circular basins filled with milky, turquoise waters, cascade down the hillside above the modern village. Although the water from the 17 hot springs no longer runs through the terraces — it’s been diverted to allow the pools to recover from overuse — sections are artificially filled with water to show what the area once looked like. A designated path allows you to walk among the terraces without causing damage to the soft shelves of white rock, although you’ll have to remove your shoes and go barefoot.

Along with a 1st-century gymnasium, 2nd-century agora and late 4th-century Byzantine gate, you can see the well-preserved remains of a Roman theater built to hold about 12,000 spectators. Among these sites are the ruins of the Temple of Apollo, a vast necropolis with circular tombs and, if you walk a little way from the main site, the Martyrium of St Philip the Apostle, an elaborate octagonal building set on the spot where St Philip was supposedly martyred. It’s a quiet place, well away from the crowds, that offers sweeping views over the surrounding landscape.