A testament to the faith, ingenuity and dedication of medieval monks, the monasteries of Meteora perch incongruously on towering pinnacles of rock jutting out from the valley floor.

The otherworldly landscape would be worthy of a visit in itself, but, topped by these seemingly inaccessible structures, it becomes an enthralling destination. Along with the monasteries are cave hermitages, viewpoints and legendary tales of invasion, royal patronage, supernatural beings and sheer grit and determination.

Forged over millions of years, the bizarre landscape of Meteora consists of a series of monumental columns of rock rising from a valley floor flanked by the Pindus Mountains.

The pinnacles have been carved into their surreal, precipitous shapes by wind and water erosion, with the numerous natural caves providing shelter since Paleolithic times.

It was a place of sanctuary in a harsh landscape and soon came to the attention of religious hermits, the first settling here in the 11th century. When you arrive, it becomes immediately apparent that the name Meteora, meaning ‘lofty’ or ‘suspended in mid-air’, is a fitting epithet.

An increasing number of attacks by the Turks led the hermits to found the first clifftop monastery here in the late 900s. Legend has it that they flew to their site on the back of an eagle. In reality, the first monks climbed the rock faces without ropes and then hauled up building materials (and, later, visitors) using winches and baskets.

In the 14th century, several other monasteries were built with royal patronage, helping the site grow to 24 monasteries by the 16th century. Only six remain and are remarkably still in use and protected by UNESCO, the state and the church.

Long flights of steps and chasm-spanning bridges allow you to reach the remaining monasteries, with panoramic views at numerous points along the way.

The best known of the monasteries is Moni Megalou Meteorou (also known as Grand Meteora), built on the highest pinnacle, 613 m (2,011 ft) above sea level. Founded in the 14th century, it was the wealthiest and most powerful monastery in the region.

All the monastic churches of Meteora contain exceptional frescoes. And, you can see another, if humbler, treasure in Moni Varlaam, where one of the original rope baskets used to pull up supplies is on display. It was in use right up until the 1930s.

We recommend visiting at sunset, when the landscape and the monasteries look at their finest. We can arrange for you to explore at this time of day on a hike or an e-bike tour.

The Meteora monastic complex remains much as it would have in its heyday, free of any shops, bars or restaurants. The best of these are nearby in the village of Kastraki, a tranquil place with a historic heart of stone houses with clay-tile roofs.

Although you can visit Meteora at any time of year, April to June and September to November are the best times to go. You’ll encounter pleasant temperatures but not the high heat and swell of visitors that July and August can bring. The winter months can be cold and wet, with occasional snow. 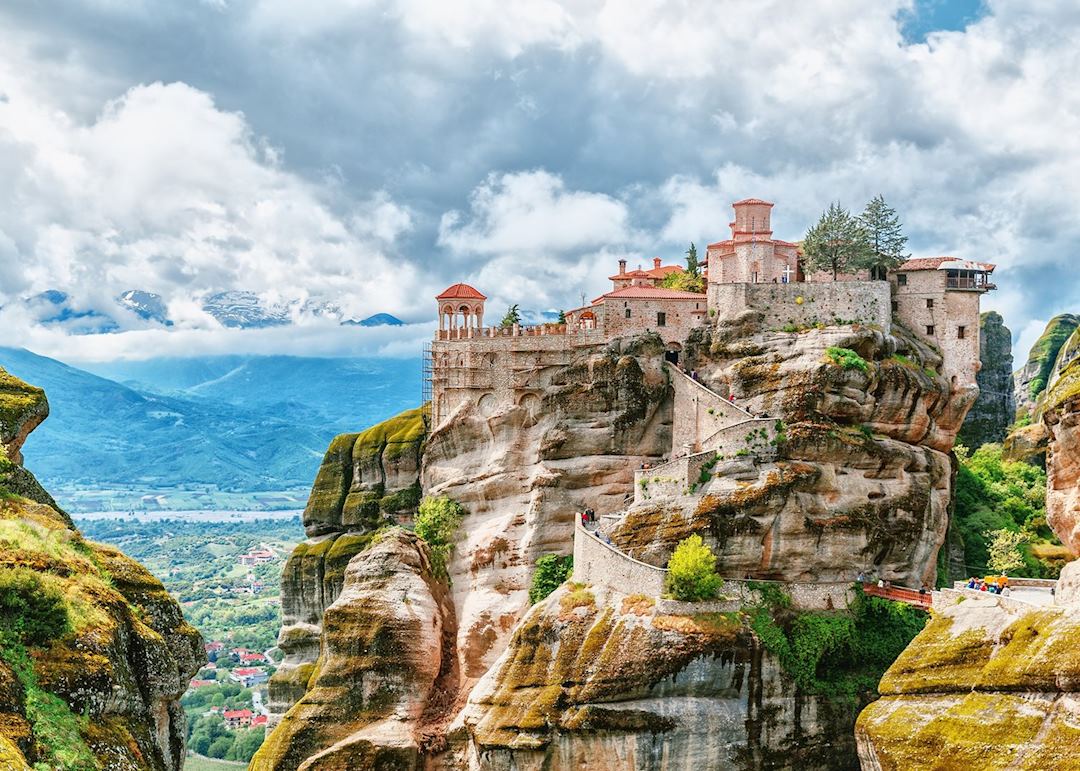 Start planning your trip to Meteora

We’ve selected a range of accommodation options for when you visit Meteora. Our choices usually come recommended for their character, facilities and service or location. Our specialists always aim to suggest properties that match your preferences.

Our specialists seek out authentic ways to get to know the places that could feature in your trip. These activities reflect some of the experiences they've most enjoyed while visiting Meteora, and which use the best local guides.

Speak to a certified Greece specialist to start planning your tailor-made holiday...

Speak to a certified Greece specialist to start planning your tailor-made holiday...