Submarine volcanoes created the 15 Westman Islands off the south coast of Iceland about 11,000 years ago. The chain of islands was joined by another in 1963, when Surtsey appeared out of the water during a sub-sea eruption that lasted four and a half years. Heimaey is the largest and only inhabited island in the archipelago and has been plagued by pirates, marauders and volcanic eruptions for centuries. Today, it makes a quiet place to slow down and unwind, experience island life, watch the antics of endearingly clumsy puffins, and explore the landscape. 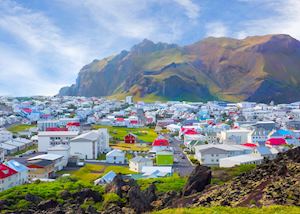 Named for escaped Irish slaves (Westmen) who settled here as they fled the wrath of Ingólfr Arnarson, the first permanent Norse settler in Iceland, the islands were attacked by the English in the 15th century, by Barbary pirates from Algiers in the 17th century, and devastated by volcanic activity on several occasions ― most recently in 1973 when Heimaey’s 5,000 inhabitants were evacuated for five months.

Heimaey’s little town, Vestmannaeyjabær, surrounds a sheltered port flanked by two brooding volcanoes. The red cinder cone Eldfell appeared in the 1973 eruption and provided the island with geothermal energy for about ten years. The ground is still extremely hot in places, but stick to the marked path and it’s a relatively easy walk to the top for good views over the town.

The 1973 eruption resulted in a huge lava flow that buried 360 houses in Vestmannaeyjabær. At the Eldheimar Museum you can see a house excavated from the pumice, while displays explain the science behind the tragedy and offer eyewitness accounts of the evacuation of the island.

The lava flow cooled to form a lunar-like landscape that fans out from the town and is now laced with walking trails leading to the Skansinn fort, a 15th-century defense post partly destroyed by the lava. The trails also lead to Stafkirkjan, a recreation of a medieval wooden church, some black beaches, and a small lava garden. 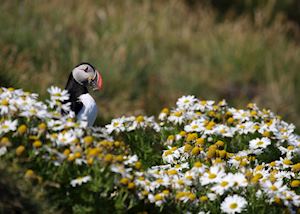 Elsewhere in Vestmannaeyjabær you’ll find a folk museum in the town’s library, and a small aquarium and natural history museum which also acts as a rescue point for puffin chicks in the summer. A huge number of puffins nest on Heimaey between May and August. You can drive or hike to the cliffs to see their curious and maladroit antics.

Beyond Heimaey, Surtsey is the Westman Islands’ most notorious attraction. This small island emerged from the sea in November 1963 and was named after the Norse fire giant Surtr. It was declared a nature reserve while the eruption was still in process and became a UNESCO World Heritage Site in 2008.

As the world’s newest island, it was of immediate interest to volcanologists and botanists who have been studying its evolution ever since. Consequently, you can’t set foot here, but the Eldheimar Museum has information on its formation and the scientific studies taking place on it.

The Westman Islands can be visited year-round but access is easiest between June and September when the seas are less stormy and the short ferry route from Landeyjahöfn is operating. You’re most likely to see puffins from May to August. Around early August, Heimaey hosts the three-day Þjóðhátíð festival, Iceland’s largest multi-day festival with concerts, dancing, bonfires and fireworks within a volcanic crater.

This sample itinerary will give you an idea of what is possible when you travel in Westman Islands, and showcases routes we know work particularly well. Treat this as inspiration, because your trip will be created uniquely by one of our specialists.