Although it’s Iceland’s second-largest city, Akureyri is home to just 18,000 people. It’s a compact, low-key kind of place with a laid-back but cosmopolitan atmosphere and plenty of good restaurants, cafés and galleries.

Akureyri acts as the commercial and transport hub for north Iceland, and you’ll almost certainly pass through if you’re driving the country’s Ring Road. Its scenic setting between snow-capped peaks at the head of Iceland’s longest fjord, Eyjafjörður, puts you in close reach of great opportunities for hiking, whale watching and northern lights viewing during the winter. It also makes a good base for visits to Lake Mývatn, Húsavík and Dettifoss. 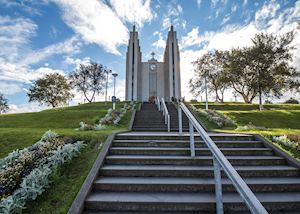 The city’s main landmark is the Akureyrarkirkja, a Lutheran church with two towers that mirror the angular columns of basalt you’ll see around the country. It sits on a hill above the city and was designed by Guðjón Samúelsson, the architect of Reykjavík’s Hallgrímskirkja. Inside, a ship floats suspended above the pews and you can also see a stained-glass window that once belonged to Coventry Cathedral in England.

Sitting just below the Arctic Circle, Akureyri claims the world’s most northerly botanical garden. The Lystigarðurinn is home to a great diversity of plants, including all native Icelandic species and many plants and flowers found at high altitudes or latitudes around the world.

Akureyri also has its own art museum as well as the Into the Arctic museum, which chronicles local life and culture. The city’s greatest allure, though, is its surroundings. It’s easy to get out into the mountains or onto the sea from here, dipping into a good choice of trips and tours to introduce you to Icelandic life and the wilderness. 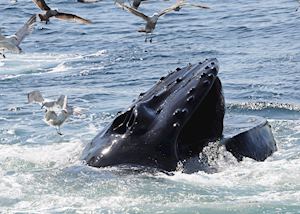 Between May and November, humpback whales feed in Eyjafjörður and you have several whale watching options in the local area, including trips on a traditional Icelandic fishing boat.

In summer, you can also see minke whales and dolphins, and it’s possible to snorkel with whales or join a midnight sun trip along the fjord.

We can also book tours outside of Akureyri for you to view the northern lights from September to early April, when the solar winds create displays several times a week.

The region’s choice of spas includes the Geosea Geothermal Sea Baths near Húsavík, where you can relax in an infinity pool overlooking the ocean, attempt to spot whales in the bay or linger over fine Icelandic food in the restaurant.

North of Akureyri, in Dalvík, the Bjórböðin Beer Spa gives you the chance to soak in a wooden tub filled with a mixture of young beer, hops, geothermal water and yeast, which the owners say will do wonders for your skin.

Akureyri is a good year-round destination with long hours of daylight in summer, facilitating hiking, touring and midnight-sun boat trips. You can snorkel with whales during the warmer months, roughly mid-May to August, and humpback whales feed in the fjord between May and November. Between September and early April, the northern lights make regular appearances, and in the depths of winter, the city offers a choice of lively festivals.

Our itineraries will give you suggestions for what is possible when you travel in Akureyri, and they showcase routes we know work particularly well. Treat them as inspiration, because your trip will be created uniquely by one of our specialists.

Our expert guides to exploring Akureyri

Written by our specialists from their own experiences of visiting Akureyri, these guides will help you make the most of your time there. We share both our practical recommendations and the best ways to appreciate Akureyri at its best.

We’ve selected a range of accommodation options for when you visit Akureyri. Our choices usually come recommended for their character, facilities and service or location. Our specialists always aim to suggest properties that match your preferences.