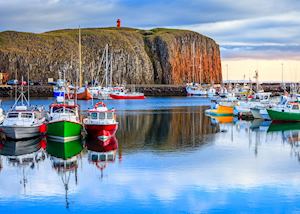 Stykkishólmur is the largest town on the peninsula, which stretches out for 100 km (60 miles). A fishing village set around a natural port, its brightly painted, 19th-century buildings give a traditional backdrop to its futuristic church. Known as Stykkishólmskirkja, the church’s bell tower is designed to look like a giant whale vertebra.

The park is criss-crossed by paths — those along the coast offer good birdwatching opportunities and you’re likely to see playful puffins on the sea cliffs. 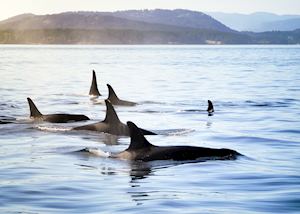 On the south coast, you’ll find unusual rock formations and black lava pebbles on Djúpalón Beach. You might also test your mettle (carefully) by trying to pick up the beach’s four well-known steintökin — natural ‘lifting stones’ of different weights that were traditionally used to gauge the strength of aspiring fishermen. The smallest is Amloði (Bungler), which weighs in at 23 kg (50 lbs) and the largest is Fullsterkur (Fully Strong), which is a whopping 154 kg (340 lbs).