India isn’t a destination of bite-sized proportions; it’s a country that requires some choices. Do you head north or south, and then into which region? In India’s north, the three cities of Delhi, Agra and Jaipur stand, in Indian terms, a relatively tiny matter of 125 to 155 miles (200 to 250km) apart. Connect them by straight lines and you have the Golden Triangle – India boiled down into one manageable route. A three-pointed area defined by the Taj Mahal, some of the best bazaars I’ve wandered around, and heritage and architecture ranging from Mughal to colonial. Especially if you have never visited India before, I suggest this is where you start.

India’s capital, New Delhi, is a place of extremes. Though I’ve found it overwhelming at times, a few days spent here reveals the old and new faces of India’s architecture, its society, and its food.

To navigate the chaotic streets, take a bicycle rickshaw with your guide. Ask to visit India’s largest mosque, the Jama Masjid. It was built in contrasting marble and red sandstone for the Mughal emperor Shah Jahan and is reminiscent in outline to the Taj Mahal.

More adventurously, you can join one of the many cycling tours that travel through the old and new sides of the city. They demand an early start (to avoid the heat of the day and the worst of the traffic), but you’ll see sights you might miss from the car, as the city comes to life.

While Old Delhi emits the type of sensory overload that has come to embody India, I prefer to stay in the leafy avenues of New Delhi. For a taste of Raj-era luxury, The Imperial oozes elegance and historical appeal. The Manor is a boutique hideaway, with just 14 rooms and suites as well as pretty lawns where you can take afternoon tea. The highlight is the award-winning Indian Accent restaurant.

Travel from Delhi to Agra and visit the Taj Mahal

Delhi and Agra are well connected by rail, and the new Gatimaan Express train can cover the trip in just 1 hour and 40 minutes, basking under the accolade of India’s fastest train. It also runs to a timetable that doesn’t depart from Delhi as painfully early as the slightly slower alternative, the Shatabdi Express.

By car, the express highway is just as convenient an option for the journey, but the city traffic can make the start and end somewhat slow going; I’d recommend an early start.

The Taj Mahal has an ethereal quality that’s hard to capture in words or on camera. The light glances off the inlaid semi-precious stones and the marble takes on the changing light tones of the day and the season.

For an alternative, longer distance view, I like to visit the gardens of Metah Bagh, just across the Yamuna River from the Taj and where you can stand and look down a long grass avenue towards its white minarets. You’ll have to fight the traffic to get there (your guide will escort you), but I can vouch that the views are more-than-ample reward. It’s also worth noting that fog afflicts Agra in December and January, but your guide will advise you on the best time of day to visit.

There’s a legend that tells how Emperor Shah Jehan had planned his own black marble mausoleum in the garden to complement the Taj, built in the memory of his beloved Mumtaz. Imprisoned by his son, he spent the rest of his life looking out from his cell in Agra Fort to the distant Taj, his own mausoleum never to see the light of day.

The vast majority of Agra’s hotels fall into the bracket of large and international properties. Although sometimes luxurious and often with plenty of facilities and amenities, they can lack charm and character. But there is one place to stay, which I like to use, that bucks this trend: a little homestay called the Coral Tree. Within walking distance of the Taj Mahal, it has only seven rooms and is a family affair, run by Vandna and Gopal Singh. I’d classify the accommodation and facilities as simple, but you stay for the family’s hospitality and their wonderful vegetarian cooking, which you eat with them around their dining table.

After a few days in the thick of Delhi and Agra, time allowing, you can opt to step off the main Golden Triangle route with a visit to the Ranthambhore National Park. Once a hunting ground for a line of maharajas, the park now protects a burgeoning tiger population. It’s also home to a vast range of other wildlife, including blackbucks, macaques and (though rare) leopards.

Easy to get to by road and a short train journey from Agra, the park has become busier in recent years, though tiger sightings have also increased. I’d suggest staying two nights here, so you can embark on game drives on both mornings and one evening to increase your chances of seeing a tiger or, if luck is really on your side, a group of them.

All the hotels that service the park lie outside its boundaries, in the surrounding buffer areas. Among them is Khem Villas, which never loses its appeal. Sitting back on the veranda of your cottage, you might feasibly spot a desert fox or a jungle cat ambling through the undergrowth of the surrounding grasslands.

Lose yourself in Jaipur’s bazaars

For me, the absolute highlight of the Golden Triangle is the ‘Pink City’ of Jaipur, a four to five hour drive from Ranthambhore. The city flowered under a succession of Hindu kings and has a redoubtable quota of palaces and temples, even by India’s standards.

And, within the city, nothing quite compares with the sensory experience of touring the bazaars: the richness of fabrics on the sari stalls, the bright domes of spices, the intense aromas, and an occasional meandering cow. In Jaipur’s markets you find the very epitome of ‘India’.

Taking an evening walk through the bazaar with your guide, when the heat of the day has passed, is a chance to see the markets as they come to life, as families gather around cups of chai (spiced tea boiled with milk and sugar) and local shoppers haggle for goods.

The Amber Fort stands atop a hill, Parthenon-like, roughly 11km (7 miles) from Jaipur. One of the best-known pieces of architectural history in Rajasthan, the fort’s far-reaching views of the Aravalli Range are distracting, but not at the expense of its intricate carvings and the Sheesh Mahal (mirror palace), where the sunlight dances across thousands of tiny mirrored mosaic pieces that come together in geometrically arranged depictions of plants and flowers.

Jaipur was the setting for the 2011 film The Best Exotic Marigold Hotel, and for a taste of this style of architecture, if not the hotel’s eccentric inhabitants, I recommend Dera Mandawa. In this small hotel, the hosts, Mr and Mrs Singh, have created a homely, welcoming environment.

Equally charming and with more facilities, Samode Haveli is in central Jaipur. When I stayed, as dusk settled, I sat on the rooftop terrace as the sounds from the busy street below floated up.

Stay at a Maharaja’s palace

If time allows, end your tour of the Golden Triangle by relaxing for a few days in the small village of Samode in the Aravalli Hills, a one hour drive from Jaipur, en route to Delhi.

Rural life in the Golden Triangle’s dusty plains comes as a refreshing change from the chaos of the cities, with nothing more to do than explore the narrow winding lanes of the village, its houses decorated with an eclectic mix of historic frescos and advertisements.

The 475-year-old Samode Palace is now a luxurious hotel, and a destination in itself. Built by nobleman Go al Singhji for the royal family of Samode, the palace is surrounded by the Samode Bagh, carefully tended Mughal gardens graced by pavilions and long channels of water. Gardens were deemed a vital part of 16th-century palace design and used for entertaining guests and greeting dignitaries.

Almost every surface of the palace is decorated with intricate murals, mirrors and hand block-printed textiles. The rooms have space and character; historical touches include the original harem windows and antique furniture. The real highlight of staying in this luxurious hideaway – aside from the rooftop pool and great service – is the view of the surrounding hills.

The Golden Triangle slots in to a longer tour of Rajasthan that takes in the city of Udaipur in the south. I like to stay at Fort Barli, a few hours’ drive from Jaipur, before continuing the road journey to Udaipur and flying, homebound, from there via Delhi or Mumbai.

Set on the banks of Lake Pichola, Udaipur has adopted the placidness of the water, a relaxed atmosphere in which to end your trip exploring the lanes and shops tucked away under archways and taking a boat trip across the lake from where you can look back and see the full beauty of the city.

Stay with a local community

For an experience that really allows you to connect with a local community in rural Rajasthan, I can’t praise a stay at Araveli Cottages and Tented Camp enough. A two hour drive from Udaipur, Araveli gives you an opportunity to mix with local villagers (some of whom help run the camp) and try your hand at a number of traditional practices, including chapatti making and creating textiles using natural dyes.

Araveli is a brainchild of WE Charity (formerly Free The Children), and you can also see first-hand the incredible work it’s doing to benefit the local community through visits to nearby schools and a health clinic.

The Golden Triangle is best visited between October and November or February and April, when temperatures are comfortable throughout the day, dipping slightly at night when a light jumper should suffice if you’re outdoors. December and January are similarly pleasant in the daytime, but night-time temperatures can be very cold. Added to this is a risk of morning fog, which can obscure sites and cause train delays. 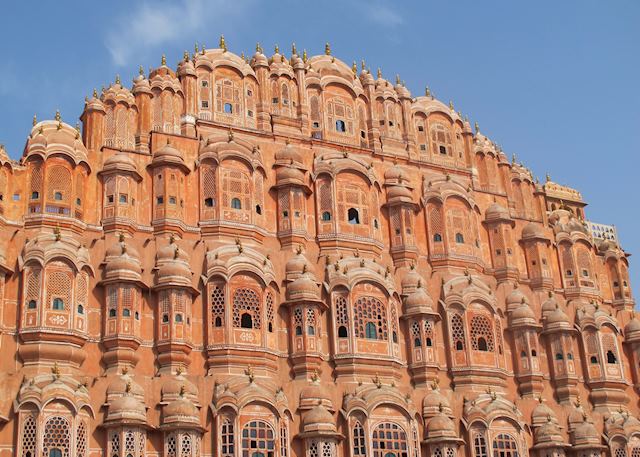