Translated from Hindi, Rajasthan means ‘the land of kings’, and its capital, Jaipur, is defined by royalty. The 18th-century Maharaja Jai Singh designed the city to meet his every whim, with royal palaces, gardens and pavilions taking up almost a quarter of its footprint. Streets were designed as parade routes and a busy craft bazaar flourished, selling wares almost exclusively to decorate royal buildings.

Jaipur has retained its flair for royal celebration: the entire city was painted pink in 1876 to welcome the Prince of Wales (it was refreshed to celebrate the visit of Queen Elizabeth II and, later, Diana, Princess of Wales.) Today, Jaipur’s prolific royal architecture is fiercely protected. It’s worth slipping into the side streets too: you’ll find the artisans, traders and shopkeepers who keep the city ticking.

For me, Jaipur is one of the most vibrant cities in Rajasthan. Not only can you explore the Pink City and the Amber Fort, but there’s the opportunity to stay in a traditional heritage haveli.

Things to see and do in Jaipur

Every surface of Jaipur’s 18th-century City Palace is adorned with carvings, silverwork or opulent textiles. The majority of the decoration was created in Jaipur’s Old Bazaars, and similar pieces of work are still made there today, the traditional techniques unchanged. Delve into some of the oldest streets of Jaipur with a local guide, and you can see the craftsmen at work. Zardozi embroidery, intricate designs created with gold and silver thread, is a particular speciality of the region.

There’s also the chance to sample some of the area’s culinary delights — popular with local shoppers and the artisans themselves. Your guide will introduce you to some of the most well regarded street food vendors, inviting you to try dishes such as freshly fried aloo tikki (potato cakes) and samosas. The desserts are as lavish as some of the craftwork, particularly the displays of barfi (a cashew nut and milk sweet) covered in edible silver leaf.

Cook with a local family

The Mandawa family have converted their ancestral home, DeraMandawa, into a welcoming heritage hotel where you can spend time in a traditional Rajasthan family setting. Most of the family still live here, inviting guests to attend their private temple for puja (prayers) each evening. Taking a cooking lesson with your hosts will help you to re-create some regional dishes back home.

Lessons begin with a visit to the nearby local market to learn how the spices, on display in towering pyramids, are prepared and blended in cooking to give a delicate balance of tastes. Back in the kitchen, you’ll help prepare a variety of dishes including Aamras ki Kadhi, a bright yellow Rajasthan speciality of blended mango and spices. You’ll dine together with the family, trying out your creations alongside a selection of homemade chutneys and pickles.

Traditionally, artisan villages in Rajasthan focus on one industry or skill, their inhabitants collectively sharing their expertise, materials and trade opportunities. The village of Bagru, a 40-minute drive from Jaipur, is no different, renowned for its intricately block-printed textiles. On a tour with a local guide, you’ll be taught the printing, washing and dyeing process.

Arriving in the village, you’ll notice immediately the great swathes of fabric drying in the sun. Logs of teak are finely carved into printing blocks while natural dyes are mixed in preparation — turmeric for yellow and madder root for red. The hand-printing process itself is a precise skill, the artists honing rhythmical movements to create the same pattern over long tables of fabric. Keen to share their skills, the printers will welcome you to try some of the printing techniques.

A revolutionary addition was the Jantar Mantar, an observatory complex. You’ll need an experienced guide to talk you through the array of large-scale instruments, which includes the largest sundial ever built. Made from brick and smooth plaster, their crisp, sculptural geometric shapes look decidedly modern.

The Hawa Mahal, or Palace of the Winds, was built alongside the main road into the city, allowing the royal women to observe parades entering Jaipur unseen behind latticed screens. While it’s possible to enter the palace, you’ll find it’s a one-room-deep façade.

The City Palace, to the east of the modern city, houses a textile museum that celebrates the region’s rich artisanal skills, as well as an armory and art gallery. 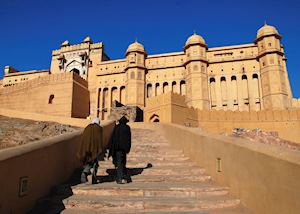 Rajasthan’s original capital was Amber, which sits 11 km (7 miles) from Jaipur. The seat of power was moved to its present location in 1727 due to Amber’s dwindling water supplies, but Amber Fort still stands guard up in the Aravalli Hills.

The best way to get to the palace is by walking up, zig-zagging past market stalls and street vendors, arriving into the main courtyard through the Suraju Pole (sun gate). Women of the royal court were banned from the courtyard, but allowed to watch the goings-on from veiled windows above. You may see decorated elephants carrying visitors to the top but, as many welfare aspects are unknown, we prefer not to recommend this method.

A labyrinth of corridors, galleries, temples and royal quarters surrounds three further courtyards. The Sheesh Mahal (meaning ‘mirror palace’) is the most ornate room, covered in thousands of mirrors and semi-precious stones; light a single candle and the entire room is illuminated. The fortified final courtyard, the zenana, was the private quarters of the Maharaja’s wives and concubines.

Generally, Jaipur enjoys warm, dry and sunny weather from October to March. The temperatures drop in December and January, with mist and fog gracing the early mornings. If you’re happy with a more humid climate, hotels offer good-value rates for April and May. From June, temperatures creep up to 45°C (113°F), making travel uncomfortable.

Our itineraries will give you suggestions for what is possible when you travel in Jaipur, and they showcase routes we know work particularly well. Treat them as inspiration, because your trip will be created uniquely by one of our specialists.

Our expert guides to exploring Jaipur

Written by our specialists from their own experiences of visiting Jaipur, these guides will help you make the most of your time there. We share both our practical recommendations and the best ways to appreciate Jaipur at its best.

We’ve selected a range of accommodation options for when you visit Jaipur. Our choices usually come recommended for their character, facilities and service or location. Our specialists always aim to suggest properties that match your preferences.

Our specialists seek out authentic ways to get to know the places that could feature in your trip. These activities reflect some of the experiences they've most enjoyed while visiting Jaipur, and which use the best local guides.