The Hague — stately home of international peace and justice, and a haven of arts and culture

Known worldwide as the seat of international justice and peace negotiations, The Hague is also the political capital of the Netherlands. The royal family resides here and tends to mingle with the general populace. You can spend several days exploring the city’s many historic buildings, excellent museums and nearby seaside area, Scheveningen. 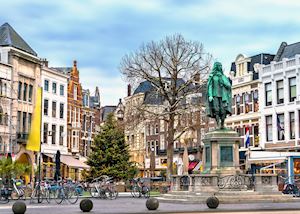 You can visit the government square, called the Binnenhof, the gardens of the royal palace, the Mauritshuis museum with its Dutch Masters and the Peace Palace, the early 20th-century experiment in bringing an end to wars, all on a walking tour we can arrange for you.

The stately stone buildings and grand royal parks surround a historic district of narrow streets and local shops, plus museums ranging from the Escher Museum to the Louwman Museum, a collection of vintage cars housed in a hyper-modern building.

On the banks of the North Sea, The Hague’s seaside resort, Scheveningen, is worth a visit for its excellent pier and beachfront.

The Binnenhof, a collection of parliament buildings set around a stately square, has been the heart of government in the Netherlands for centuries. Its focal point is the Ridderzaal or Hall of Knights, a peaked 13th-century building with two conically capped towers and an intricate rose window.

This building was first used as a pleasure palace for Floris IV, Count of Holland, but has seen many uses since then, including a trading place, promenade, public records office, hospital and market hall. Today, the building hosts royal events amid the other arcaded halls of state. The complex sits on the edge of the Hofvijver pond, creating a highly photogenic panorama from the pond’s opposite bank. 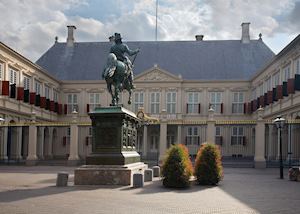 The Royal Palace, or Noordeinde, has been the home of the House of Orange since 1591, and is still used by the royal family as their place of work. A comparatively modest white mansion set around a courtyard, the palace has red shutters on its many windows and an ornate gate boasting the royal coat of arms.

While the palace itself is only open to the public a few times a year, you can access its gardens through a secluded door, which you’ll see if you take a walking tour. The stables, where the horses and coaches are kept, are nearby. The street, also called Noordeinde, is known for having the highest density of art in the Netherlands, with many galleries, antiques and art dealers.

The design of the building was considered too elaborate at first, due to the solemnity of its purpose, but the current brick neo-Renaissance building has a stately grandeur, with an impressive clock tower, arched portals along the front and a steep roof peppered with tiny gabled windows. Because it’s a working building, you can visit the grounds and reception area at any time, but tours are more difficult to secure and are based on what events and proceedings are happening on a given day. 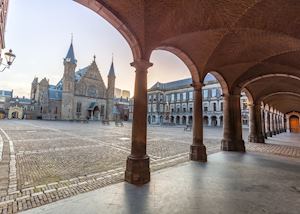 The Royal Picture Gallery Mauritshuis is a stellar collection of artworks by the 17th-century group commonly known as the Dutch Masters, including Rembrandt, Vermeer and Holbein the Younger. Adjacent to the Binnenhof, the compact brick palace with its pale-yellow façade and ornamental friezes is home to some of the world’s most beloved paintings, including Vermeer’s Girl with a Pearl Earring.

The building was originally the home of count Johan Maurits van Nassau-Siegen — thus its name — but the collection was founded in a smaller gallery by Prince William V in 1774 and moved to the larger space in 1820.

This luxe shopping area has its secret right in its name, as the rows of historic-looking gabled houses are a bluff — the details reconstructed or copied from historically listed buildings elsewhere. A pedestrian enclave in the central part of the city, where brick step-gabled façades front smooth modern buildings, Haagsche Bluf is home to high-end boutiques, cafés and restaurants. Its self-awareness gives it charm, and its parodic name also references a popular local dessert: Haagse Bluf, a fluffy, pink, meringue-based confection touched with berry juice.

This trove of cars, motorcycles and coaches began in 1934, with a single 20-year-old Dodge. These days, the museum houses several hundred cars, ranging from classic antiques to Formula One racers. A few celebrity cars also live here, including James Bond’s Aston Martin from Goldfinger and Elvis Presley’s custom Cadillac. Some oddball specimens, such as the swan car that’s literally shaped like an enormous mute swan, round out the collection.

The building itself is a modern architectural statement, fashioned of brick and concrete with wide-open exhibition space inside, but boasting two tall, steeply peaked gabled roofs, reminiscent of more classic Dutch styles.

The Kunstmuseum is a modern art museum housed in a series of modern cube-shaped buildings of yellow brick, connected by a skybridge over a reflecting pool. Until the end of 2019, the museum was known as the Gemeentemuseum or Municipal Museum — a reference to its enormous collection of contemporary art.

Its new, more general name encompasses its expansion into other art forms and periods, including an extensive collection of Delftware pottery. It also houses the world’s largest collection of work by 20th-century Dutch artist Piet Mondrian. 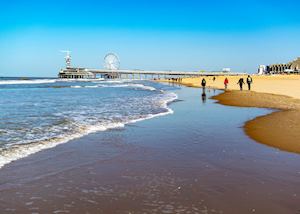 A seaside district on the outskirts of The Hague, Scheveningen is the most popular stretch of sand in the Netherlands. Fronting the North Sea, the resort area is filled with various 19th-century confections of beachside buildings, including the Kurhaus, a grand hotel and restaurant opened in 1886. The boulevard and beach pavilions offer places where you can walk and take in the sights, or change and go down to the beach for a swim or a nap on the sand. You’ll also find seaside attractions near its modern pier, including a lighthouse, a Ferris wheel and numerous restaurants.

From The Hague, we can arrange for you to spend a day in nearby Delft and visit the Royal Delft factory and museum. A medieval city that played a large role in the Dutch Golden Age, Delft is also the birthplace of Vermeer and is well-known for its Delftware, delicate porcelain pottery painted with intricate blue designs. We offer a walking tour that lets you see the particularly well-preserved old town, the medieval church tower that leans to one side and Royal Delft, where you’ll learn about the history of the pottery and take a workshop where you can paint your own tile.

Best time to visit The Hague

As with much of the Netherlands, the best time to visit is March through May or September through November, since the weather is more pleasant and the crowds smaller than in the summer months of June, July and August. The seaside area picks up starting in April, and the city gets very busy in the warmer months.

Our itineraries will give you suggestions for what is possible when you travel in the Hague, and they showcase routes we know work particularly well. Treat them as inspiration, because your trip will be created uniquely by one of our specialists.

Map view Places near the Hague

Map of the Hague

Places near the Hague

Photos of the Hague

Accommodation choices for the Hague

We’ve selected a range of accommodation options for when you visit the Hague. Our choices usually come recommended for their character, facilities and service or location. Our specialists always aim to suggest properties that match your preferences.

Ideas for experiencing the Hague

Our specialists seek out authentic ways to get to know the places that could feature in your trip. These activities reflect some of the experiences they've most enjoyed while visiting the Hague, and which use the best local guides.