Your guide and driver will pick you up at your hotel on the day of your tour and plan a route around the city that reflects your interests.

One of the key sites to visit is George’s Pier Head by the River Mersey. Named after the reigning King George, the pier was opened in 1771. Historically, it’s one of the most significant areas in Liverpool, as trade here was at the heart of the city’s wealth.

George’s Pier Head is located directly in front of the ‘Three Graces’ — the collective nickname for the Royal Liver Building, Cunard Building, and Port of Liverpool Building. Visiting these impressive structures, you’ll hear about their role in the maritime history of Liverpool, along with the folklore about the two liver birds on top of the Liver Building.

A short drive away is the cultural quarter and the cobbled streets of William Brown Street, with its swathe of historical public buildings. You can visit the Liverpool Central Library, where you’ll see the soaring dome above the atrium staircase, the circular Picton Reading Room and the grand Hornby Library. Also on William Brown Street is the Walker Art Gallery, built in 1890, which is home to a permanent collection of Victorian art.

Another option is Liverpool’s Metropolitan Cathedral of Christ the King. Built in Brutalist style, it was constructed in 1967 and is Britain’s largest Catholic cathedral. You’ll be taken inside to view the striking design, which includes a marble altar that’s visible from every seat, and nine intimate chapels.

After visiting ‘The Phil’, you can move onto Liverpool’s Anglican cathedral, which is more traditional in design. Inside is art by Craigie Aitchison, Tracey Emin, Elisabeth Frink, Christopher Le Brun and Adrian Wiszniewski, all members of the Royal Academy of Arts.

Once your tour is complete, your driver can return with you to your hotel or, if you’d prefer, drop you somewhere central.

Other experiences in Liverpool 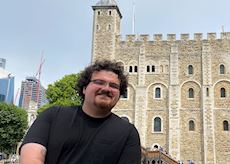