Having been brought up by a mother with serious wanderlust, I was lucky enough to travel throughout the United States for most of my childhood exploring National Parks in the west, visiting family in Southern California, and skiing in Northern California.

With a focus on Art History and French for my college degree, I was fortunate to study in Europe a couple of times during my four years at college. I spent a semester in Florence studying Renaissance art and architecture and another semester in Rennes in France, studying language. My love for art history also took me to Greece and I got to tour the mainland as well as several islands before continuing on to the coast of Turkey and Istanbul.

Along with my love for art and architecture, I’m a passionate cook and avid skier and before joining Audley, I worked as a portrait and food photographer and event planner. Now, I can combine all these skills to help others discover the incredible treasures of both the US and Europe. 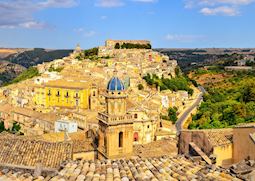 After my research trip to Sicily, I found it incredibly difficult to pick just one favorite new place, as Sicily has so much to offer. But, if I had to narrow it down to one area, I would say the Baroque cities in south-eastern Sicily would be it. Ragusa, Syracuse and Noto offer so much natural beauty, as well as impressive architecture largely rebuilt after they were destroyed by a 1693 earthquake.

My perfect day would be waking up in Ragusa, then heading out early to Noto to enjoy a coffee stop and a stroll through this perfectly white marbled town. From there I’d head to a winery for a wine tasting of local south coast Sicilian wines including the famous Nero D’Avola. Afterwards, I’d have lunch at a café in the seaside village of Marzamemi watching the fishing boats bobbing up and down in the water. The final stop would be Syracuse. I’d have a wander through the old town of Ortigia before settling down in a café opposite the Cathedral, once a 5th-century BC Greek temple, with my evening spritz. 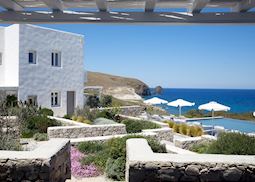 After a long day of travel, arriving at the Milos Breeze and slipping into the saltwater infinity pool to watch the sun set over the Aegean is a heavenly way to finish a day. The hotel is built in typical Cycladic style with whitewashed buildings surrounded by lush gardens. Inside, its sleek, simple design gives it a great sense of calm and it’s easy to while away your days by the pool just admiring the views. If you do want to explore, the hotel sits on a hill just outside Pollonia and you can easily walk into town for dinner, shopping or a stroll around the marina.

Of all Greece’s archaeological sites, I was most struck by Ancient Olympia. This former religious site, dedicated to the worship of Zeus, began hosting athletic competitions around the 8th century BC, and in today’s Olympic Games, the torch begins here. Touring the site, I learned from my guide that the torch is called ‘the light of Greece’ and represents the light of the country, which is shared with the world to celebrate the start of the games. It’s lit using a small reflective cauldron, which uses light from the sun to ignite a flame.