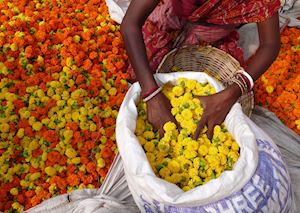 Calcutta’s a chaotic patchwork of colonial architecture, vibrant festivities and garlands of marigolds, with the distinct scent of Bengali street food. However, India’s third largest city manages to organize this chaos while proudly showcasing its rich tapestry of history, art galleries, religion and culture.

Alternatively, try a multi-day cruise into the relatively untrodden West Bengal or board a local ferry across the river to Howrah Station, the oldest and largest in India. From Calcutta, you can catch domestic flights onto Assam, Darjeeling or toward the Himalaya.

It’s best to explore Calcutta’s streets early in the morning, when traffic is sparse. With a guide, venture into the Jewish or Portuguese quarters or stroll down College Street, lined with piles of university books. Alternatively, sample some Bengali morsels on a breakfast tour. Try mishti doi, a sweet fermented yogurt, washed down with tea served in a traditional clay pot made from the sacred Hugli’s clay. 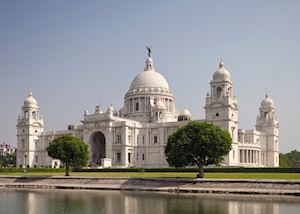 Each flower symbolizes a different religious or medical purpose in Indian life. The garlands are mainly used for ceremonial purposes — however some are used for temple offerings and puja (prayer). During festivals they’re used to decorate everything from houses and cars to sheep.

Calcutta is a gateway for exploring the contrast between India’s industrial cities with agricultural practices and village deities. Onboard a multi-night cruise, you’ll float past mildewed warehouses and locals washing laundry in the ghats before immersing yourself in West Bengal’s relaxed pace of life. As the settlements diminish in size, you’ll find decorated riverside temples and a sprinkling of former Dutch, and French colonial settlements.

Our expert guides to exploring Calcutta

Written by our specialists from their own experiences of visiting Calcutta, these guides will help you make the most of your time there. We share both our practical recommendations and the best ways to appreciate Calcutta at its best.