The mountains — home to the Jebali tribesmen with their traditional rifles and pastoral lifestyle — dominate the Dhofar hinterland. The most spectacular pass across them is the “Furious Road” which rises 400 meters in three miles through eight hairpin bends. 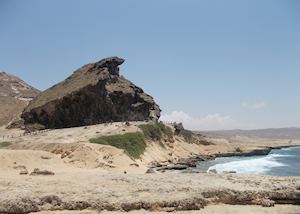