It was the captivating natural beauty of Yosemite’s glacier-cut valleys that first inspired the US government to preserve and protect its wild spaces. Situated in California’s Sierra Nevada mountain range, the park draws in millions of visitors each year. They come to marvel at its imposing sheer-sided granite cliffs, waterfalls, freshwater lakes and ancient sequoia trees.

Unsurprisingly, Yosemite is a popular hiking spot. Trails long and short, steep and gentle lead you around Yosemite Valley (the park’s main focal point) and beyond. These are easily explored independently, but heading out with a guide gives you an insight into the area’s history, geology and wildlife. For something more adrenaline-fuelled, you can try rock climbing or zip-lining. Self-driving is also an option in the park — the winding drive up to Glacier Point highlights Yosemite’s vast scale.

If, like me, you love being among natural beauty, keeping active and enjoying time in the great outdoors, Yosemite National Park is hard to beat in California.

Things to see and do in Yosemite National Park

Go walking with a private guide

Exploring on foot with your own guide is the best way to get to know the park. It’s especially beneficial doing this on your first or second day, to gain a good grounding in Yosemite’s history and see its key features, including the Half Dome and El Capitan rock formations and Yosemite Falls and Bridalveil Fall.

Guides are highly trained and experienced, with an in-depth knowledge of the park’s history, geology, wildlife and walking trails. They can tailor the day to your interests, whether you want to hike to lesser-known viewpoints, see a specific animal or geological feature, or take a stroll around Yosemite Valley’s floor. As you walk, your guide will point out any wildlife you encounter and share tales about his or her own experiences in the park.

There is a variety of walking trails across Yosemite Valley and the wider park, from short strolls covering flat terrain to steep mountain climbs and full-day hikes. All the routes are well maintained and clearly signposted. It’s a good idea to talk first with park rangers at the Yosemite Valley Visitor Center. They can recommend trails suited to your interests, fitness level and time constraints, as well as give you maps and directions.

Following your chosen trail, you may come across some of the park’s wildlife — listen out for the crack of a twig as mule deer forage in the forest, look up at the sky to spot eagles and condors circling above, and stay alert for the rare sighting of a black bear.

We recommend the 8 km (5 mile) Mirror Lake loop trail in Tenaya Creek. The lake forms after snowmelt between late April and early June, but outside this time you’re surrounded by wildflowers, evergreens and sheer-sided cliffs.

Various walks take in views of Yosemite’s waterfalls, while in the quieter northwest of the park you can enjoy a secluded two-hour walk around Hetch Hetchy Reservoir, Yosemite’s largest body of water. 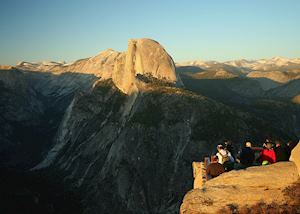 A winding hour-long drive from the Yosemite Valley floor up the pine-covered cliff side, Glacier Point has an elevation of 2,199 m (7,214 ft), allowing for some of the most expansive views in the park. The altitude means it’s only accessible from mid-May to November due to the snow, and there’s usually a distinct chill in the air.

Standing on Glacier Point’s natural stone platforms, you can gaze over the entire valley. The slumped outline of Half Dome is directly opposite at eye level, while the frothy water of Yosemite Falls spilling over the rock reminds you that this isn’t a painting you’re looking at, but real life.

Yosemite is a Mecca for climbers, who travel from far and wide to tackle the park’s vertical cliff faces and well-known rock formations. The bravest can occasionally be seen clinging to the side of Half Dome or even camping in tents or beds suspended halfway up the valley side.

While you may not be ready for this level of climbing, you can learn the basics under the tuition of a professional guide and experienced rock climber. You’ll learn the skills and techniques needed to reach heights of up to 18 m (60 ft). Routes are selected based on your interests and ability, and all the safety equipment — including rock climbing shoes, harnesses and helmets — is provided.

Take photographs away from the crowds at Artist Point

To capture the classic view of Yosemite Valley, most visitors stop at Tunnel View. Emerging from the Wawona Tunnel on Highway 41, you’re immediately presented with views right down the valley. Granite cliffs rise vertically on either side, and the valley floor is awash with evergreen trees. The viewpoint’s popularity and ease of access attract coach loads of people lining up their perfect shot and posing in front of the panorama.

An alternative vantage point is Artist Point, a 3.2 km (2 mile) round trip from the Tunnel View platform. Follow the Pohono Trail and head uphill (an ascent of 150 m [500 ft]). Once there, you have equally impressive views over the valley, but with a much more peaceful atmosphere. You can also see features that aren’t visible from Tunnel View, such as Ribbon Falls.

Zip-line through the trees

An hour’s drive southwest of Yosemite Valley in Mariposa, you can embark on a two hour zip-lining tour. The scenery of the Sierra Nevada foothills takes on a different perspective as you glide over treetops along 1,158 m (3,800 ft) worth of wires.

In a group of up to ten led by an experienced guide, you’ll be driven in a 4x4 to seven different zip-lines, each one longer, higher and more exhilarating than the last. During the drive, your guide will tell you more about the history and wildlife of the area.

Highlights include the tandem lines, where two riders can race each other side by side, a line where you try to throw a bean bag onto a target as you pass over, and 'The Motherlode' line, which sees you soar 300 m (1,000 ft) through a tunnel of trees and across a ravine.

Have dinner at the Majestic Yosemite Hotel

Built in 1927 as tourism in Yosemite blossomed, the Majestic Yosemite Hotel offers the most impressive menu in the whole park. The hotel is conveniently situated between Yosemite Village and Half Dome Village in the heart of the Yosemite Valley floor. Its stone and wood structure prevents it from imposing on the surrounding landscape.

Its high-ceilinged dining room with full-length windows, chandeliers and wooden beams makes any meal here feel like a grand affair. While breakfast and lunch are more casual, there’s a smart dress code for dinner. The menu covers traditional American cuisine, from rib-eye steak to rotisserie chicken, as well as fish dishes and vegetarian options.

During May and early June, the snowmelt means all areas are accessible. The park’s waterfalls, lakes and streams are in full flow, as well as the Merced River, which winds through the valley. May is cooler and slightly less busy than June, when lots of wildlife species are at their most active after emerging from hibernation.

In September there are far fewer people, the weather is pleasant and Glacier Point is still accessible. Visiting in October, meanwhile, allows you to see the landscape changing from green to golden brown.

Our itineraries will give you suggestions for what is possible when you travel in Yosemite National Park, and they showcase routes we know work particularly well. Treat them as inspiration, because your trip will be created uniquely by one of our specialists.

We’ve selected a range of accommodation options for when you visit Yosemite National Park. Our choices usually come recommended for their character, facilities and service or location. Our specialists always aim to suggest properties that match your preferences.