JFK called space exploration ‘one of the great adventures of all time’. To celebrate the 50th anniversary of the first moon landing this July, we’ve found a few ways for you to embark on your own space-themed adventure on your next trip. You can explore astronomy’s beginnings in the museums of Lisbon and Oxford, wander amid an immersive cosmic art installation in Tokyo, and relive the Space Race (from a Soviet perspective) in Moscow. And, of course, we’ve hand-picked some of the best stargazing experiences from around the world. 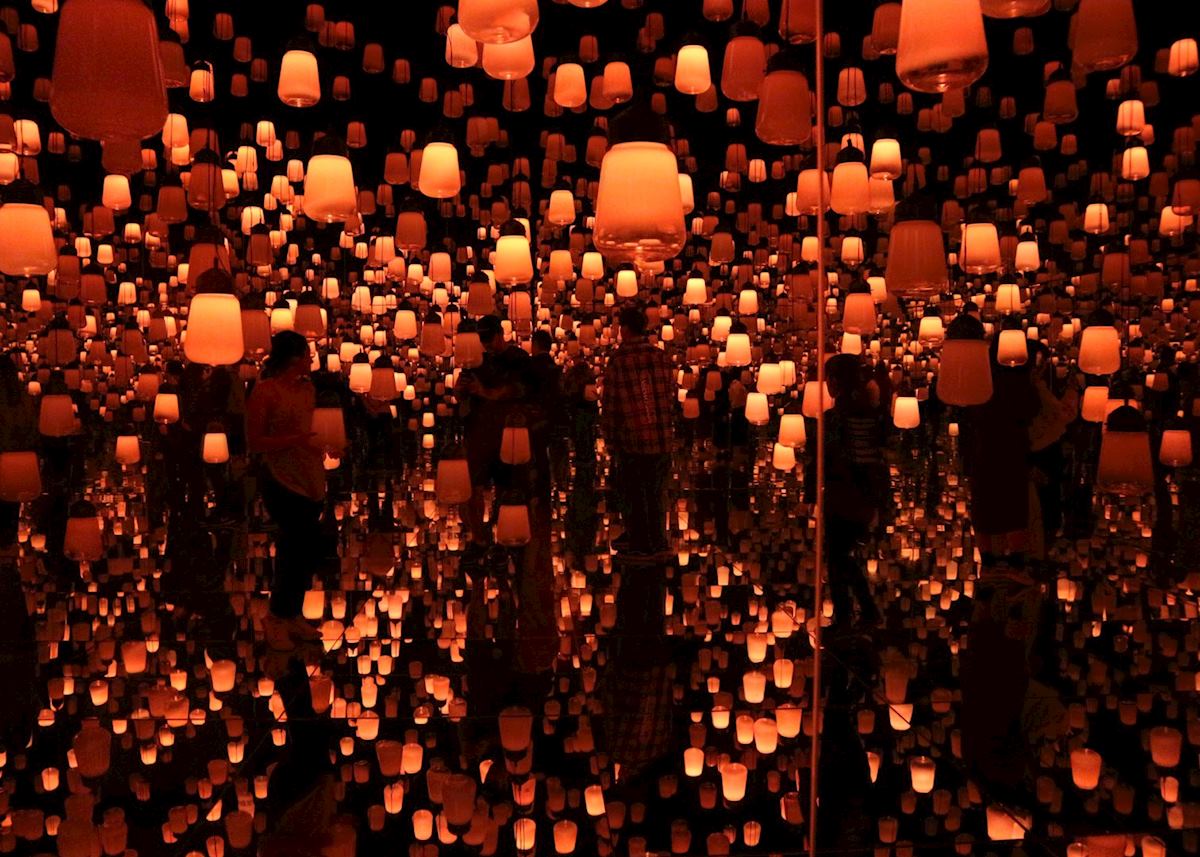 By its very nature, getting hands-on with space can be tricky. But, in a huge warehouse on the outskirts of Tokyo, you can clamber over giant orbs, wade through swirling beams of light and stand suspended in what feels like an infinity of glittering lights.

Well, you’re not actually suspended, but teamLab’s mirror room is pretty convincing. This creative collective is dedicated to immersive art installations, using digital technology (you can even download an accompanying app), lights and lots of mirrors.

Their latest exhibition, Planets, throws you into an abstract world of astrological shapes and lights. Each exhibit is a world unto itself, taking over a room bigger than most art galleries. You’ll find yourself climbing over giant bean bags and waving your arms to make digital flowers bloom. When that gets too much, you can lie on your back and watch an interstellar light display.

A short walk from Toyosu Station, the exhibition takes around an hour to reach by train from central Tokyo. Unlike many galleries, play is encouraged, making it an ideal addition to a family adventure across Japan.

You can pre-book timed entry tickets in advance online. We also recommend you wear shorts: arguably the most striking room is a swirling mass of lights, projected onto a shallow layer of water that you’ll wade through with bare feet. 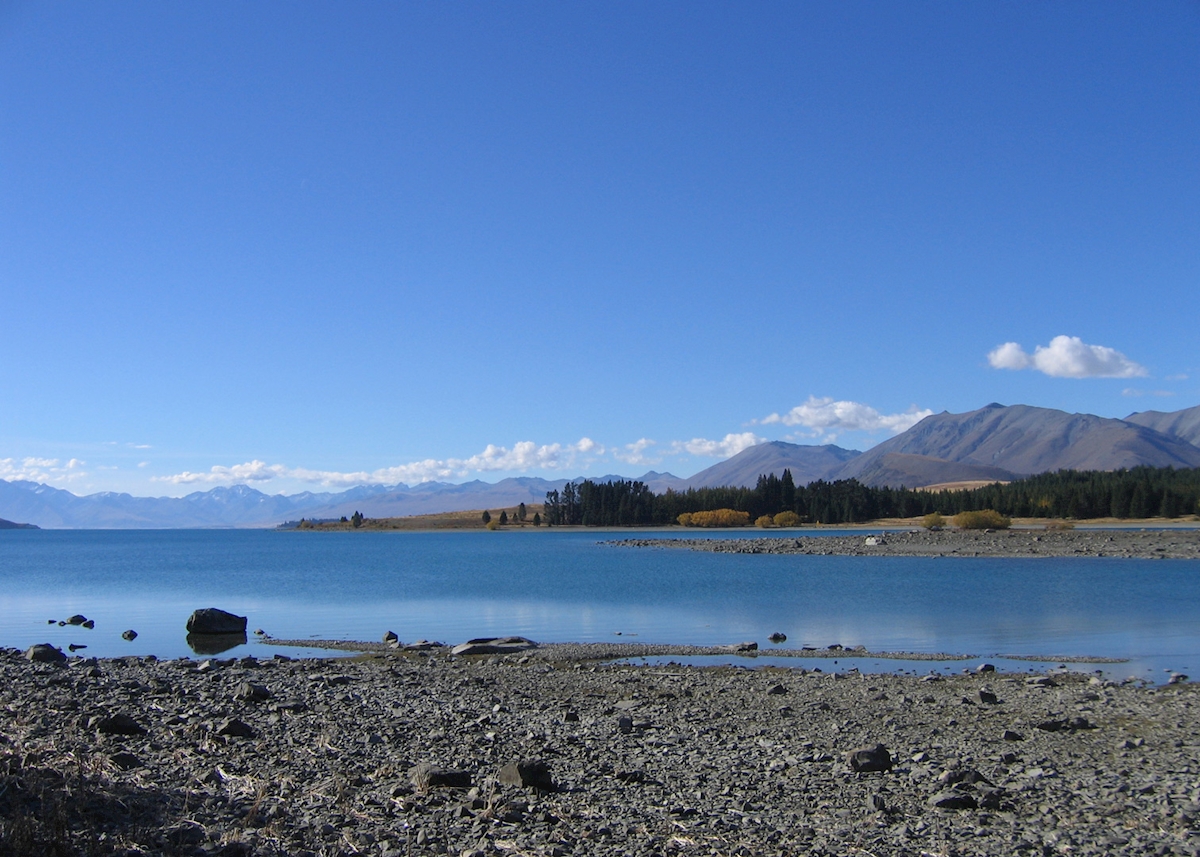 There are Milky Ways and Milky Ways. Although it’s always a thrill to see, the galaxy shines particularly brightly in New Zealand’s Aoraki Mackenzie International Dark Sky Reserve. Here, the sky is so totally unfettered by light pollution that it appears a rich, deep purple. As your eyes become accustomed to the darkness, you begin to pick out individual stars from among the long smear of white that forms the Milky Way’s galactic core.

You can see the Milky Way splendidly here with the naked eye but why stop there? Situated atop the roche moutonnée of Mount John is the observatory of the same name, looking like a cluster of golf balls dotted about the open tussock grass.

On an observatory tour, you can watch as resident astronomers talk you through the night sky with the aid of an infa-red torch, before giving you a chance to look through some telescopes. They’ll guide you as to what there is to see: you might home in on the Southern Cross, or view Mars.

Tours begin at midnight, but, happily, this region is just as photogenic during the day. Its showpiece is Lake Tekapo itself: on sunny days, the water glows an iridescent turquoise thanks to its high levels of glacial silt.

Starry-eyed about the Space Race ― the Memorial Museum of Cosmonautics, Moscow, Russia 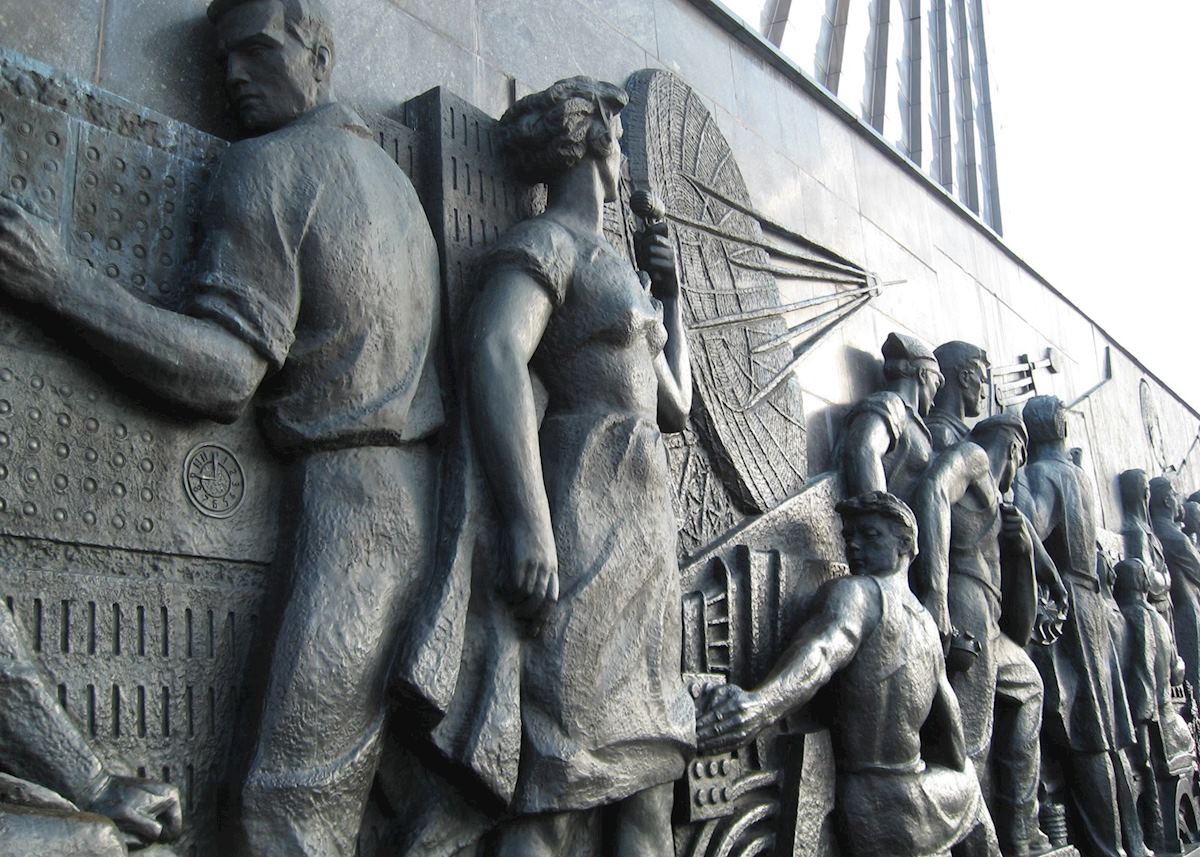 The Memorial Museum of Cosmonautics

The clue’s in the name: this place is a retro monument to past glories. It doesn’t cover Russia’s current space agenda (which ― as some pro-Soviet guides explain, a little wistfully ― is barely non-existent).

The homage begins on the outside. You’re greeted with a soaring titanium sculpture of a rocket blasting off (the Monument to the Conquerors of Space, erected in 1964 to commemorate Sputnik). The rocket is visible on the approach from central Moscow. Then you enter the underground bunker that forms the museum.

It’s low-tech and slightly hands-on: you’re mostly observing original objects and some scale replicas. We were struck by just how bulky early cosmonaut suits were. You can peer closely at a moon rover and stuffed space-dogs, and walk right inside an early space station ― experiences that make this a great addition to a family trip to Russia.

You can also buy food that was especially adapted and packaged for consumption by cosmonauts.

What’s perhaps most fun is the chance to see the Space Race and the Cold War from a Russian perspective. From the propaganda posters on display to the way that cosmonauts were revered, the whole museum is served with a heavy helping of nostalgia for the Soviet period ― and we’ve found that guides often share that sentiment.

The finest stargazing in South America ― the Atacama Desert, Chile 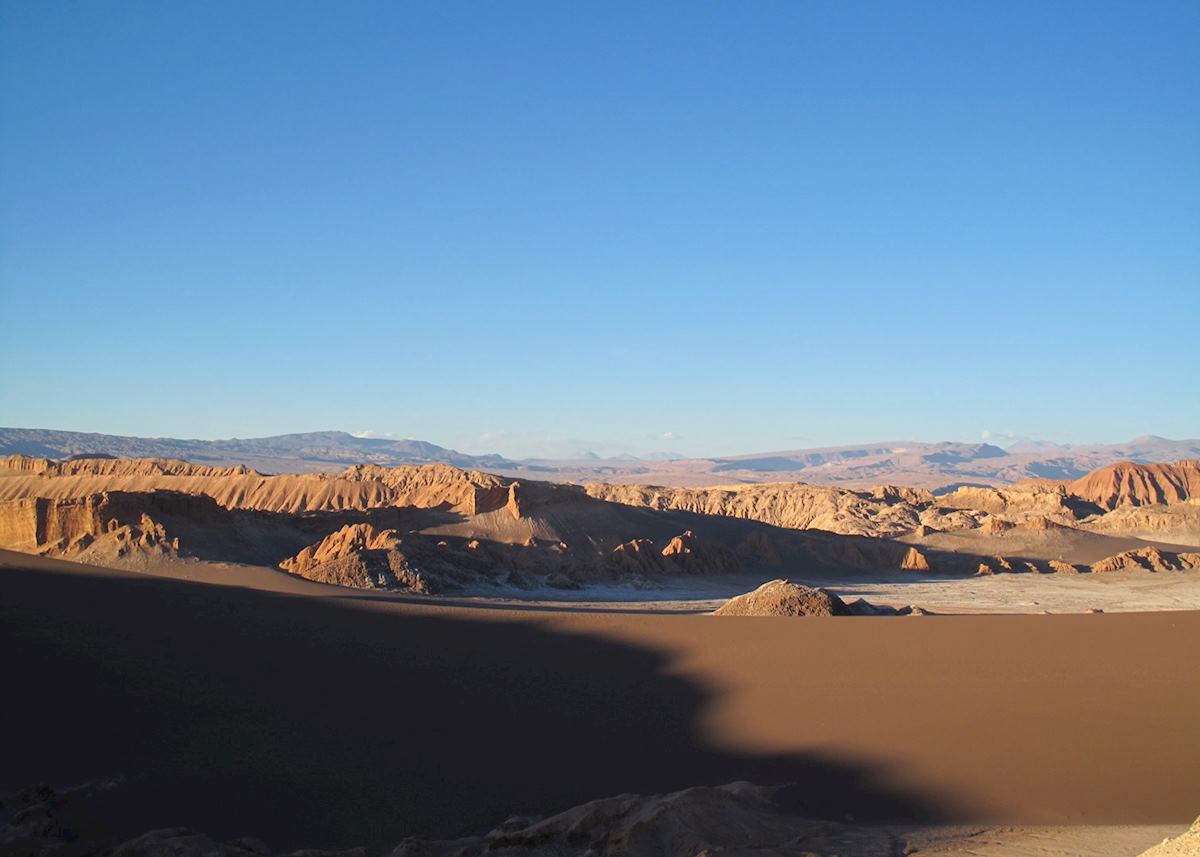 High, dry, and inhospitable, with barely a straggle of vegetation in places, it feels as though you’ve landed on Mars when you first touch down in the Atacama. The earth is tinged red and orange and pitted with craters, while great dunes and badlands warp the landscape as far as the eye can see.

The altitude here (you’ll mostly be at 2,600 m to 3,000 m (8,530 ft to 9842 ft) above sea level) make night skies remarkably clear. And, while the effects of climate change have made the heavens milkier of late, it still remains one of the best places on the planet to stargaze.

How and where exactly to stargaze is the subject of much fevered discussion among Audley’s Chile specialists, for whom the Atacama is a real highlight of any Chile trip. While we all have our go-to tours, some stand out.

First and foremost, there’s the world-leading ALMA Observatory, which has 66 radio telescopes. Though these antennae are mostly situated on a high plateau closed to visitors, you can still take free tours of the observatory every Sunday to learn about its ground-breaking research first-hand. It works closely with NASA.

One recent newcomer is El Pangue Observatory. Its founder, French astrophysicist Eric Escalera, takes a small group of visitors up to the observatory’s viewing platform for an impressively detailed three-hour viewing, using both the naked eye and telescopes. Planets, stars, nebulas, clusters: you can see them all on one night. 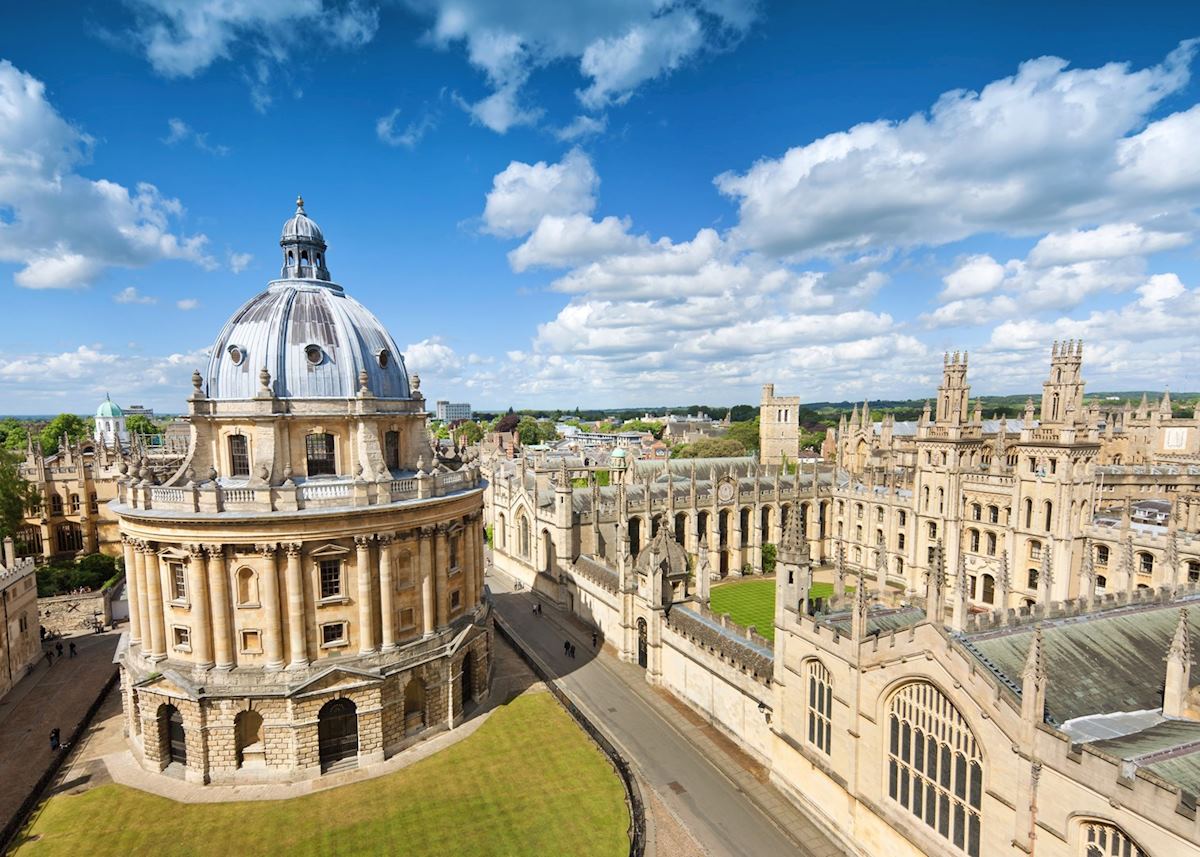 In the days before satellites, telescopes or even accurate clocks, astrolabes were the pinnacle of navigation technology. Often made of brass, these complicated instruments were used to determine the inclination of celestial bodies, which, in turn, could be used to find latitude, triangulate position or to identify stars and planets.

If all of this makes you yearn to see the world’s largest collection of astrolabes, you should know that both the Maritime Museum in Lisbon and the History of Science Museum in Oxford lay claim to that highly coveted title. We here at Audley don’t feel qualified to adjudicate such a high-stakes issue, but we can recommend either museum as a stop on a trip to their respective cities.

This year marks the 500th anniversary of the start of Magellan’s circumnavigation, making the Maritime Museum an apt stop on any trip to Portugal, which pioneered the Age of Exploration along with Spain. The museum’s exhibits delve into the Age of Exploration and you’ll see opulently gilded ships, fleets of models and, of course, a massive collection of navigation instruments, including many astrolabes.

In Oxford, the History of Science Museum is easy to overlook amid the riot of prestigious colleges and museums, but it’s worth a few hours if you’re exploring southern England. In addition to the astrolabes, you can see an array of orreries, armillary spheres, diptychs and other obscure instruments, as well as Lewis Carroll’s camera, Marconi’s wireless receiver and a blackboard with Einstein’s handwriting still scrawled across the slate.

Stargazing at the Oberoi ― Mauritius 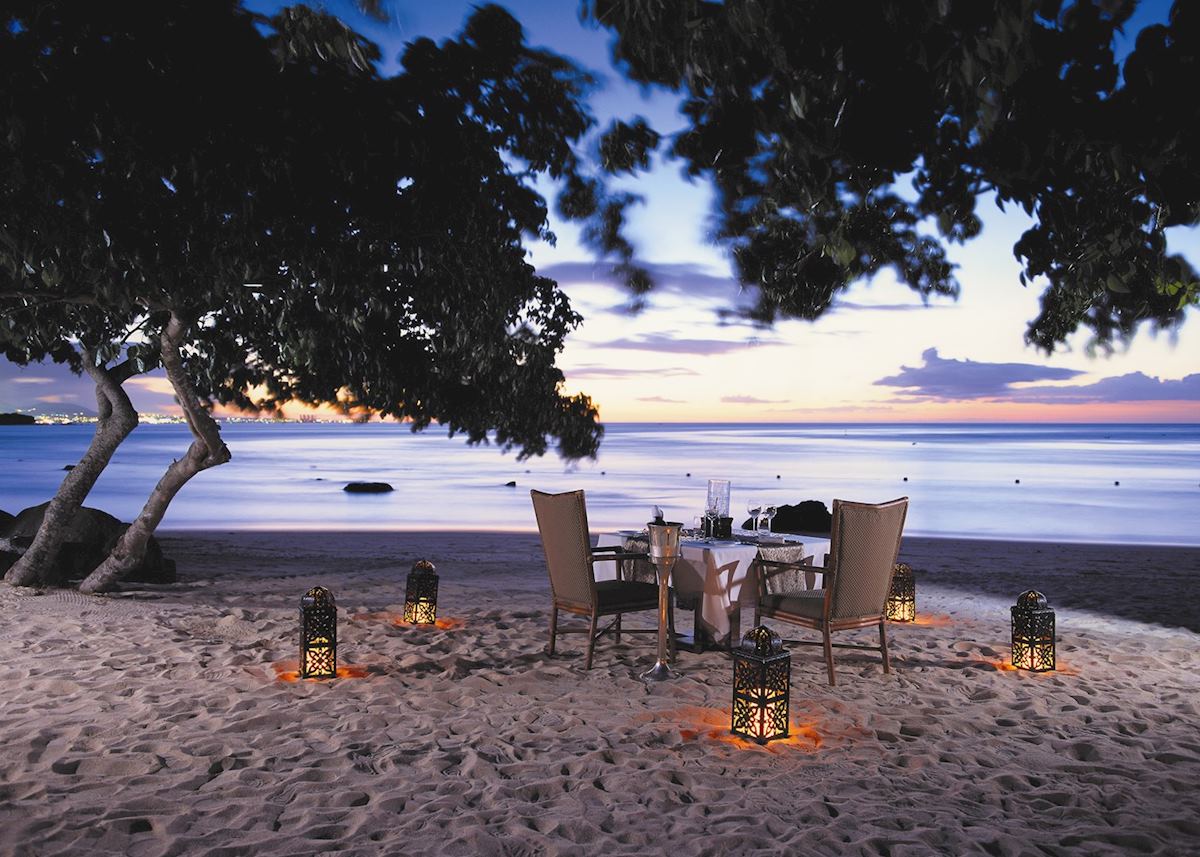 In the northern hemisphere, the familiar constellations have names and stories that harken back to Greek mythology. Astronomer Ptolemy set the tone when he named 48 of them in the 2nd century, from Andromeda and Cassiopeia to Ursa Major and Ursa Minor.

However, the southern hemisphere sees a different swathe of the sky and has different constellations. You can learn more about southern skies on a visit to the Oberoi Mauritius, an opulent hotel with an African vibe on the northwest coast of the island.

Far from most light pollution, the remote island offers a dark sky that reveals the dense blanket of shimmering stars in the southern heavens. The well-manicured grounds and sugar-sand beaches offer a lovely setting for strolling in the dark with an on-staff expert who can help you navigate these nighttime vistas.

During the complimentary excursion, the expert will teach you how to plug coordinates into the telescope and help you spot stellar sights like the Jewel Box, a star cluster inside the Southern Cross, as well as explain why it’s technically an asterism and not a constellation. You might also get a brief introduction to navigating by the stars. 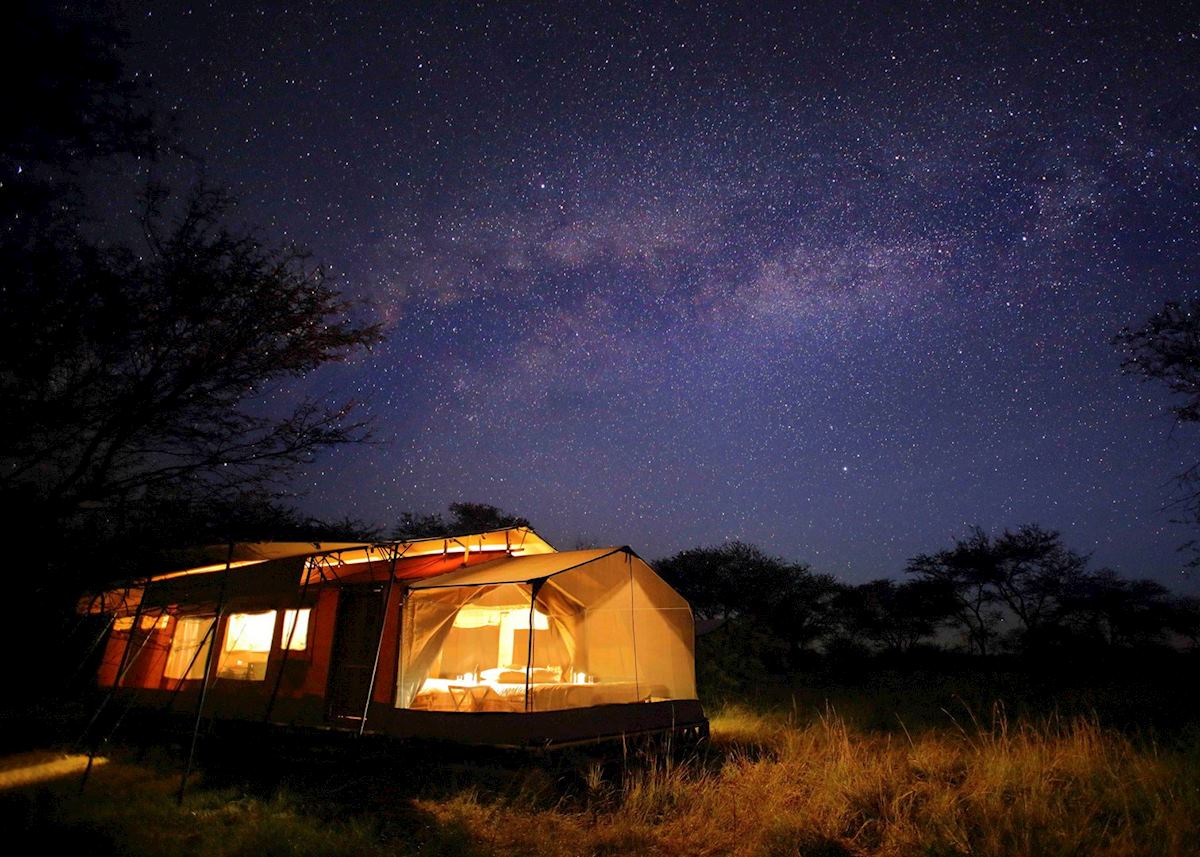 Far from the intrusive amber glow of city lights, Tanzania’s Serengeti National Park hides under inky darkness once sundowners have been sipped. Your eyes, so focused on the park’s animal-scattered plains during the day, are lured upwards as a glittering canopy of stars appears crystal clear above you. The longer you look, the more seem to appear.

At most safari camps, stargazing takes place at dinner or over drinks around the campfire. But, at Olakira Mobile Camp, you can continue studying the heavens even after you retire to bed. Each of the nine canvas tents has an area made completely of mesh, giving you 270-degree views of the night sky before you drift off to sleep.

With your head on your pillow, you can map the constellations, from Taurus and Scorpio to Orion and his hunting dog, Canis Major. The Milky Way is clearer in the southern hemisphere, and seeing it often sparks all of life’s big questions. Your eyes will automatically pick up any movement from shooting stars or passing satellites. And, for a closer look at star clusters, simply raise your binoculars.

You can include a stay at Olakira on a classic northern Tanzania safari. The camp moves between the southern and northern Serengeti, following the Great Migration herds to ensure the best game viewing.