Internationally renowned as the home of one of the oldest and most prestigious universities in the world, Oxford is steeped in history. It’s a city populated by honey-stoned buildings dating back to medieval times, while tiny pubs lay claim to hosting some of the world's greatest minds.

Everywhere you go are reminders of the city's illustrious past and thriving present. Beyond the main sights of the university, you’ll find arts and science museums, rivers teeming with rowers and punts, and an animated city of independent shops, characterful hotels and historic drinking holes hidden down winding lanes.

Remember to look up at the rooftops; keep your eyes peeled whenever you turn a corner: you’ll see everything from quaint cafes to surprisingly contemporary statues. You can spend a day just admiring intellectual-yet-energetic Oxford University’s architectural feats.

Things to see and do in Oxford 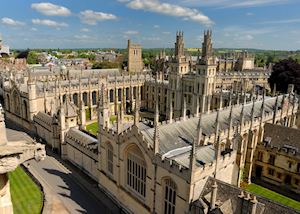 The University of Oxford is Britain's oldest and most famous (along with its great rival, Cambridge). Teaching began in the 11th century and, so far, 50 Nobel Prize winners, 26 British Prime Ministers and numerous literary giants have studied here.

The university’s students and scholars are divided among 38 colleges, each set in private grounds. The colleges are almost like universities in miniature: each has its own library, chapel, dining hall and teaching rooms. Grotesques and gargoyles watch over wisteria-draped cloisters, and a warren of shadowy passageways open out onto secluded green squares (called ‘quads’). Such spaces often border Oxford’s busiest shopping streets, and yet are invisible to outsiders. Some colleges can be visited as part of a guided walking tour of the university and city.

The museums founded and funded by the university include the Ashmolean, Britain’s oldest museum, which has a soaring neo-classical edifice, and the tenebrous Pitt Rivers, packed with anthropological curiosities from around the world.

Oxford's hallowed halls and archaic traditions have long been a muse for storytellers. JRR Tolkien, CS Lewis, Oscar Wilde, Charles Dodgson (Lewis Carroll) and TS Eliot are just a few of those who studied and taught here. More recently, college rooftops and scholarly arcana provided inspiration for Philip Pullman’s His Dark Materials trilogy (the first book of which was filmed as The Golden Compass). All around the city you'll find connections to authors, poets and playwrights, including Shakespeare.

Medieval libraries full of dusty tomes and sagas beloved by Tolkien, college grounds and river trips that worked their way into Alice in Wonderland, pubs where literary clubs discussed their work — all these can be experienced. The city also has an interactive and quirky Story Museum, which offers a creative take on writings from around the world.

The University of Oxford’s college and museum buildings are a large part of the city's appeal. The Victorian poet and critic Matthew Arnold referred to it as a city with 'dreaming spires’ — a tribute to its skyline, which is punctuated by steeples, domes and roof lines.

Particularly worth a visit is the Bodleian Library with its circular Radcliffe Camera, Gothic fan-vaulted Divinity School (the oldest teaching room in the university), and Jacobean Old Schools Quadrangle. Hertford College’s Bridge of Sighs and the Natural History Museum are other architectural highlights, but it can be just as rewarding to wander the cobbled streets that snake between the college buildings, seeing where they take you.

Although Oxford is a small city, it has several distinct districts with disparate characters. The central area is home to the oldest university colleges, museums housing everything from Ming pottery to ancient astrolabes, and a large cluster of shops, bars and restaurants.

A short walk from Jericho brings you to the grassy, waterlogged expanse of Port Meadow, where you can follow the river upstream to a number of traditional pubs set in quaint villages.

Our itineraries will give you suggestions for what is possible when you travel in Oxford, and they showcase routes we know work particularly well. Treat them as inspiration, because your trip will be created uniquely by one of our specialists.

We’ve selected a range of accommodation options for when you visit Oxford. Our choices usually come recommended for their character, facilities and service or location. Our specialists always aim to suggest properties that match your preferences.

Our specialists seek out authentic ways to get to know the places that could feature in your trip. These activities reflect some of the experiences they've most enjoyed while visiting Oxford, and which use the best local guides.