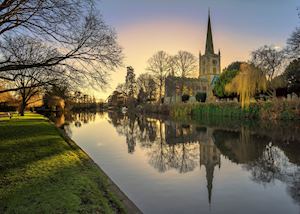 Nearby is the 12th-century Church of the Holy Trinity, where Shakespeare was both baptized and buried. The handsome riverside church has many later additions, including an 18th-century spire, stained-glass windows and elaborately decorated wall tombs, but the main reason to visit is to see the modest final resting place of Shakespeare and his wife, Anne, who are interred in the chancel.

The Royal Shakespeare Company dedicates itself to performing the Bard’s plays as well as those of his contemporaries and modern playwrights. You can watch the company perform in its main auditorium, the Royal Shakespeare Theatre, which sits on the west bank of the River Avon. Major stars often ply the stage in the regular performances of Shakespeare's works and high-caliber contemporary productions.

This sample itinerary will give you an idea of what is possible when you travel in Stratford-upon-Avon, and showcases routes we know work particularly well. Treat this as inspiration, because your trip will be created uniquely by one of our specialists.