A much-lauded corner of northwest England, made famous by the Romantic poets, the Lake District is a region of green fields, mountainsides rendered purple and russet from heather and bracken, and steely lakes. Most of the area is now protected as a national park and the views that so inspired William Wordsworth, Beatrix Potter and John Ruskin have changed little over the years.

England's highest mountain and deepest lake are found here, along with many tiny villages seemingly left untouched by the passing of time. It’s a great place to hike, its fells (the local word for peak) entwined by a network of stone walls, and dotted with hardy sheep and ancient stone circles.

The Lake District is natural England at its most pristine. I love its mirror-like lakes that reflect the surrounding landscapes. Every turn you take in the mountains or the woods has the potential to surprise you with a new vista.

Things to see and do in the Lake District 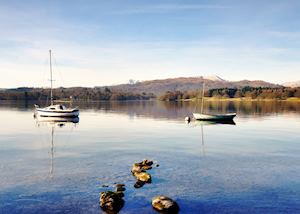 A long, shimmering expanse of water, Lake Windermere is the largest natural lake in England. It's an impressive sight, 16.9 km (10.5 miles) long and surrounded by steep hills and fertile valleys.

It was the inspiration for the fictional lake in Arthur Ransome's adventure Swallows and Amazons, and has been a strategic waterway ever since the Romans built a fort at its northern end to control regional trade.

Today, Windermere is one of Lake District's best spots for fishing, canoeing, sailing and kayaking. It’s just a short hop from many of the region's most popular attractions, such as Beatrix Potter's beloved farm, Hill Top.

Just north of Lake Windermere is Ambleside, a Victorian-era town with a lively atmosphere. It’s a popular starting point for many of the region’s gentler walks and bicycle rides, and its streets are lined with cafes, restaurants and outdoor clothing shops.

The Stock Ghyll stream rushes through the town, turning into Stock Ghyll Force (‘force’ being an old northern English term for waterfall). It flows under the photogenic Bridge House, a tiny 17th-century storage room that has been painted by many artists, including Turner. Just a mile south of the town is Waterhead, where the Windermere steam ferries dock.

One of the prettiest Lake District villages, Grasmere is a meandering cluster of stone cottages that sits on the banks of the River Rothay. It has strong connections to the Romantic poets, in particular to William Wordsworth who lived in nearby Dove Cottage. Along with his wife Mary and sister Dorothy, he is buried in the graveyard at the village church.

The place hums with visitors during the summer months. Yet explore in the quiet evenings, and you'll appreciate more readily Grasmere’s poetic setting, its knot of streets surrounded by a valley and fells.

Our itineraries will give you suggestions for what is possible when you travel in the Lake District, and they showcase routes we know work particularly well. Treat them as inspiration, because your trip will be created uniquely by one of our specialists.

Places near the Lake District

Ideas for experiencing the Lake District

Our specialists seek out authentic ways to get to know the places that could feature in your trip. These activities reflect some of the experiences they've most enjoyed while visiting the Lake District, and which use the best local guides.