On the wet and windy western coast of Scotland, Oban is a small port town that serves the Argyll area. During warmer months, the narrow streets bustle thanks to the ferries and tour boats that dock here, a vital connection between the mainland and the Inner Hebrides. The crowds include both visitors and hardy residents who still scrape out a living as crofters (farmers) on the archipelago.

The town is conveniently located for exploring both the islands and the castles and glens of Argyll. But it’s more than just a base. Here, you’ll find exceptional restaurants, a distillery and a monumental Victorian folly that offers sweeping ocean views.

Oban is one of my favorite cities in western Scotland. During the day, I like to explore the shop-lined streets and distillery. When evening comes, I’ll enjoy a pint at a local pub and watch the sun set over the bay.

Things to see and do in Oban 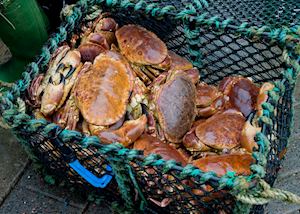 Oban perches on the edge of the Sound of Kerrera, a narrow inlet that runs between the town and the Island of Kerrera. The port is sheltered by the bulk of the Inner Hebridean islands, making it an attractive berth for fishing boats. Local eateries take full advantage of this and offer menus that spotlight the bounty of the sea.

Restaurants here range from the formal to the casual, but perhaps the most elemental is the Oban Seafood Hut. A small green shack emblazoned with ‘Local Seafood’, it stands on the quay overlooking the bay. The food is exclusively takeout — or, as the locals would say, ‘takeaway’ — and can be eaten at a communal table. The shellfish is enormous and impeccably fresh, delivered straight off the pier. The menu includes scallops and mussels as well as cockles and langoustines.

Looming over the town is a strange sight for a small Scottish port — a tower of arches that looks like Rome’s Colosseum, though it’s rendered in dun-gray granite instead of aged limestone.

Completed in 1890, it was commissioned by John Stuart McCaig as equal parts philanthropic exercise and monument to his own ego. His stated goal was to provide employment for the out-of-work masons in town. However, the original design prominently featured Roman-style statues of himself and his family, as well as an art gallery and a museum. He died with just the outer wall built and work came to a halt, leaving the town with a unique folly.

The stairs up the hill, named Jacob’s Ladder, are steep and long, but if you make it to the top you’re rewarded with views of the bay and islands.

In a handsome gray-and-black stone building, Oban Distillery is located in the heart of the town, both literally and historically. Though the area has been settled since the Mesolithic era, the modern town grew up around this small whisky distillery, which was founded in 1794.

The distillery produces only single malts in limited runs, due to its circumscribed size. The whisky is aged in casks that have been used several times, which might be why the youngest offering is a 14-year bottle — the spirit requires that long to absorb the subtle character of the well-aged wood.

This rain-drenched archipelago offers some of Scotland’s wildest, most varied landscapes. Oban acts as a gateway to seeing some of them. You’ll find black basalt columns rising abruptly from the ocean as well as serene white-sand beaches curving around aquamarine coves. Ruined castles seem to appear out of the ever-present mist and white-tailed sea eagles soar overhead.

A cruise around some of the islands offers a way to experience in the islands’ myriad pleasures from the water. Spot seabirds including guillemots, shags, gulls and cormorants, as well as sea mammals like seals and perhaps even porpoises and basking sharks.

The land around Oban is dense with the history of Argyll’s feuding clans and ancient kings. Castles and hill forts still dot the region, some crumbled to ruin while others are still immaculately kept.

Just outside Oban, Dunollie Castle is an ivy-covered tower that’s slowly being restored. Once a stronghold of the MacDougalls of Lorn, it dates back to the 13th century. It’s just 1.5 km (1 mile) from town, via a pretty and simple walk. Look for the tall Celtic cross, a monument to the 29th clan chief, Alexander James and his wife Colina.

North of Oban, Castle Stalker is a stolid, square tower perched on a small island in Loch Linnhe. Its gray bulk stands against a backdrop of gently rounded mountains in the distance, a sight that may be familiar to fans of Monty Python and the Holy Grail — this was the setting for the Castle of Aaargh.

On the shores of Loch Awe to the east of Oban, Kilchurn Castle has also fallen into disrepair, though the ruins are safe to explore. Once a stronghold of the Campbell clan, its broken walls are framed by gorse-gilded mountains and reflected in the still waters of the loch.

By contrast, Inveraray Castle is still home to the Duke of Argyll, Chief of the Clan Campbell. Its slate-roofed turrets and well-manicured grounds seem more suited to France’s Loire Valley than the glens of Scotland. The architect was Sir John Vanbrugh, who designed Blenheim Palace in England. The rooms reflect the castle’s 18th-century heyday, including an armory that boasts soaring ceilings and a mind-boggling number of vintage weapons on the walls.

Older than any of the castles is Dunadd Hill Fort. Today, just a few traces remain, but it was once the seat of the kings of Dál Riata. The ancient Gaelic kingdom encompassed western Scotland and northeastern Ireland and its kings eventually overthrew the Picts to unite Scotland as the Kingdom of Alba.

A brief drive from Dunadd, Kilmartin Glen boasts one of the densest concentrations of prehistoric sites in Scotland. The countryside here is fairly littered with stone burial cairns, standing stones, hill forts and stone circles, all dating from the Neolithic or Bronze Age.

There are hundreds of sites, many built on a vast scale. Temple Wood is arguably the best preserved — two rings of standing stones shaded by a handful of trees. There’s also a museum in the village of Kilmartin that adds context to the 6,000-year history of the area.

A narrow, silvery slash through the Argyll countryside, Loch Awe is the longest freshwater loch in the country. Hemmed in by forested hills and mountains, it starts near Loch Lomond and the Trossachs National Park and runs 41 km (25 miles) southwest toward the coast.

The loch acted as a natural moat, protecting Clan Campbell from northern incursions, and remnants of its fortified history dot the shores and islands. It’s a quiet place for walking, fishing and touring on a boat to enjoy the Highland scenery.

Thanks to the Gulf Stream, weather in Oban is mild but often unsettled, with rain and sunshine interspersed unpredictably throughout the day. It can be somewhat raw between November and March, so we suggest visiting during the warmer months. Of these, April, May, September and October bring the best weather and fewer other visitors. Regardless of when you visit, be prepared for periods of rain.

This sample itinerary will give you an idea of what is possible when you travel in Oban, and showcases routes we know work particularly well. Treat this as inspiration, because your trip will be created uniquely by one of our specialists.

We’ve selected a range of accommodation options for when you visit Oban. Our choices usually come recommended for their character, facilities and service or location. Our specialists always aim to suggest properties that match your preferences.

Our specialists seek out authentic ways to get to know the places that could feature in your trip. These activities reflect some of the experiences they've most enjoyed while visiting Oban, and which use the best local guides.