One of Europe’s finest cathedrals dominates central Canterbury, a city that has held power and influence since Roman times. With its ancient city walls, riverside gardens, Norman castle and half-timbered Tudor buildings, it’s a character-laden place that offers a vivid insight into Britain’s past.

Over the years, it has been a place of pilgrimage and literary inspiration, and it remains the seat of the Church of England. The car-free central streets and medieval alleyways lend themselves to leisurely walks, while the large student population from the city’s two universities ensures the atmosphere is vibrant with a good choice of cafés, restaurants and shops.

It’s known for its namesake cathedral and Chaucer’s tales, but Canterbury is so much more than that. I like wandering through the cobblestone streets and visiting the cafés and pubs while admiring the medieval architecture and tiny foot bridges.

Things to see and do in Canterbury

Scene of bloody violence as well as devout spirituality, this imposing Gothic cathedral sits at the heart of the city and was founded by Saint Augustine in 597. Together with the ruins of Saint Augustine’s Abbey and the ancient Saint Martin’s Church, it’s protected as a UNESCO World Heritage Site.

The cathedral was rebuilt in the 11th century and again following a devastating fire in 1174. By this time, it had become a place of pilgrimage following the murder of the archbishop Thomas Becket. The pilgrims brought the wealth needed to expand the church. Inside, you’ll find a soaring Perpendicular-style nave surmounted by fine fan vaulting, stained glass, a cloister and an 11th-century crypt.

Thomas Becket, an archbishop murdered in 1170, is perhaps Canterbury’s most renowned citizen. His opposition to the power and privileges of the church led to his murder by followers of King Henry II.

Venerated as a saint by both the Catholic Church and the Anglican Communion, his death stimulated a tradition of pilgrimage to the city, a practice that poet Geoffrey Chaucer used as inspiration for his celebrated work The Canterbury Tales.

A critical look at English society in the late 14th century, the work is showcased at the visitor attraction of the same name. Costumed actors play out some of the tales and shed light on life in Canterbury at this time.

With the collapse of the Roman Empire, Canterbury fell into decline until the monk Augustine arrived to set about preaching Christianity to the Anglo-Saxons of Britain. He successfully converted the local king and constructed a monastery as well as a cathedral here in 597, establishing Canterbury as the birthplace of Anglican Christianity.

Saint Augustine’s Abbey was his original monastery. Although it later became a royal palace, it was finally abandoned and today only the ruins remain. These are vividly brought to life in the small museum through a virtual reality experience and audio tour, which shows you what 16th-century abbey life was like.

Thought to be the oldest parish church in continuous use in the world, Saint Martin’s was the private chapel of Queen Bertha, wife of the Anglo-Saxon King Ethelbert, in the 6th century. She welcomed Augustine here, and he used the church as his base while building his new monastery and cathedral.

Although the present church dates from medieval times, you can see Roman bricks and tiles that were reused in its construction, as well as sections of the 6th, 7th and 8th-century churches on the site. Once you’ve had a look around, take a walk in the churchyard where Mary Tourtel, the creator of Rupert Bear, is buried.

Wander through central Canterbury and you’re surrounded by half-timbered Tudor buildings and cobbled lanes. On the High Street, you can see where early pilgrims stayed at the Eastbridge Hospital, which has been welcoming visitors since 1170. Inside is a Romanesque undercroft and 16th-century almshouses, which are still in use today.

The city’s only remaining medieval gateway is the imposing West Gate, a 14th-century fortification that now houses a small museum and offers great views from its towers. Also worth a look is the Greyfriars Chapel, which dates from 1267 and sits in tranquil riverside gardens.

The Great Stour River meanders through Canterbury, splitting into two channels as it crosses the city. These long stretches of waterfront give Canterbury a tranquil feel. Riverside gardens and walkways lead you through a quieter side to life in the city, especially in the summer months.

You can also explore the city by punt or rowboat, seeing some of the riverside buildings from another vantage point and getting a sense of what Canterbury must have been like in its heyday.

Rebuilt in 2011, the Marlowe Theatre has state-of-the-art facilities and is one of Britain’s leading regional performance spaces. It’s named after Shakespeare’s rival and contemporary, playwright Christopher Marlowe, who was born in Canterbury.

The theater attracts top companies and productions, and hosts a changing program of drama, comedy, dance, music, cabaret and children’s performances, as well as regular workshops and heritage events.

May and September are the best times to visit Canterbury, with long days and generally warm, dry weather but none of the crowds of the peak summer months. 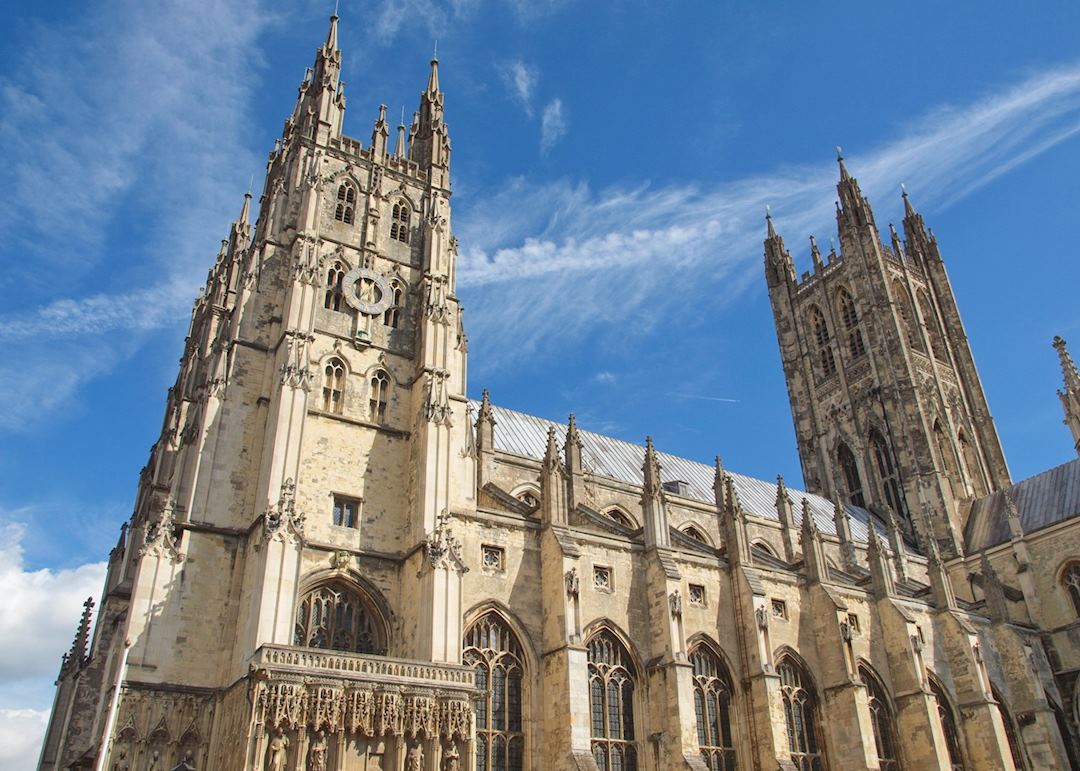 Start planning your trip to Canterbury

We’ve selected a range of accommodation options for when you visit Canterbury. Our choices usually come recommended for their character, facilities and service or location. Our specialists always aim to suggest properties that match your preferences.

Our specialists seek out authentic ways to get to know the places that could feature in your trip. These activities reflect some of the experiences they've most enjoyed while visiting Canterbury, and which use the best local guides.