It’s almost impossible to keep up with Tokyo’s progress: a city that is ever building, updating and innovating. As the neon façades grow higher, the temples and parks are carefully respected, maintaining quiet refuges within the city. The latest trends and fashions can be found in quirky cafés and pop-culture clothing, while centuries-old rituals are still valued in the training halls of the sumo and under the tiered roofs of Tokyo’s tranquil shrines.

I’ve never been anywhere else with such contrasts. Delicate temples stand next to earthquake-proof skyscrapers and peaceful gardens sit aside 24-hour markets.

Things to see and do in Tokyo

Wander through the Imperial Palace Gardens

As the main residence of the Emperor of Japan, the Imperial Palace is closed to visitors, but it’s possible to wander the palace’s East Gardens. The gardens protect the remains of Edo Castle, the seat of Japan’s rulers until 1888, when the Imperial Palace was built. None of the main buildings are left standing, but you can still explore the moat, entrance gates and the city wall, which was constructed of huge stones.

Pathways wind through manicured lawns, overhung with carefully trimmed pine and maple trees, and past a small tea plantation and a series of ponds topped with waterlilies. Visit in March and you’ll find the flowerbeds in bloom. Towards the middle of the park lies a huge platform — the foundations of the castle’s tower — which you can climb for views across the lawns.

Attracting shoppers from all over the world, Tokyo’s Ginza shopping district contains some of the most expensive real estate in Japan. Brands such as Chanel, Dior and Louis Vuitton boast gleaming flagship stores alongside extensive shopping malls and cafés. Sitting among the luxury goods retailers, you’ll find a selection of specialist and quintessentially Japanese shops from vintage kimono sellers to artisan chocolate makers.

Natsuno sells more than 2,500 types of chopsticks while the bookshop Morioka Shoten chooses to sell only one novel a week. Hello Kitty’s first store can be found here as well as comic shops crammed with children and adults alike. To try a popular mid-shopping treat, stop at one of the many coffee shops and order an anpan — a bun stuffed with sweet red-bean paste.

Referred to locally as ‘the city within the city’, Shinjuku is Tokyo’s buzzing commerce hub, an ideal spot to head to after a day’s exploration. Skyscrapers, shopping malls and contemporary hotels are crammed in among narrow streets lined with tiny eateries, karaoke bars and red-light establishments.

Evening is when Shinjuku becomes particularly animated, pulsing with flashing neon signs and music. The Tokyo Metropolitan Government Building towers over it all. From the observatory deck on the 45th floor, you can see right across the district. Back on the ground, there are fashionable wine bars to try, or head to Golden Gai (Golden District) for its compact collection of bars and restaurants.

Watch the street fashion in Harajuku 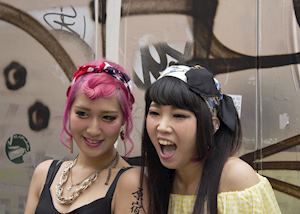 Since the 1970s, western Tokyo’s Harajuku district has become a hive of Japanese youth culture and fashion. Tiny, independent shops line the streets, crammed with a bewildering array of clothes. Takeshita-Dori Street is the focal point, where shops sell kitsch cartoon accessories, beauty parlors dye hair shades of neon and a bespoke fairy-wing maker has set up business.

Visit on a Sunday and you’ll find the street turned into a parade ground for aficionados of Japanese street fashion to show off their style. The carefully curated outfits are emblematic of a range of subcultures from doll-like Lolita girls to leather-clad Gothic styles. The most theatrical garb is cosplay: costumes based on Japanese cartoon characters.

In a city full of temples, Sensoji is where it all began. Legend dictates that two fishermen caught a small gold Buddha in their nets and built a temple on the site to house it. Over the following years, the temple gained stature, with the city of Tokyo slowly swelling around it. Record has it that the temple was founded in 645 AD.

On entering through the Kaminarimon Gate, you’ll find that the temple is now an impressive complex of halls and gardens. Many of the halls are relatively modern, having been rebuilt after heavy bombing during World War II. The bright stalls of mementoes and trinkets may look like a modern addition, but souvenir vendors have been selling to pilgrims within the temple since the 18th century. A popular tradition is to visit the incense burners of the Bentendo Shrine and waft the scented wisps of smoke over any aches and pains. 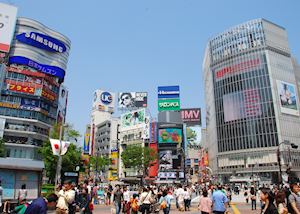 At one of the world’s busiest intersections, in front of the entrance to Tokyo’s Shibuya Station, ten lanes of traffic and five crossroads converge under the relentless flashing of neon signs. With each change of the lights, more than 1,000 people surge forward, gilding seamlessly past one another in a minute of co-ordinated chaos.

Known by local people as ‘the scramble’, the spectacle is particularly dramatic on a Friday or Saturday night when the streets are thick with crowds dressed in their evening finery. Once the last train of the night has departed, the crossing becomes eerily deserted.

Appreciate the peace at Meiji Shrine

After the death of Emperor Meiji in 1912 and his wife in 1914, 100,000 trees were donated from across Japan to plant a pocket of forest in west Tokyo. At its heart, the Meiji Shrine was built in the imperial couple’s memory and completed in 1920.

Wandering this green space, with its wide, tree-lined paths and peaceful benches, makes a refreshing change of pace to the city beyond. The 12 m (40 feet) high torii arches at the entrance to the shrine complex mark the point at which you must leave everyday life behind as you pass into a sacred space.

As part of their visit, many choose to write a Kiganbun — a letter to the deities, usually accompanied by a donation and posted in one of the many post boxes within the shrine. Wishes are also written down, on wooden prayer plaques, and hung on the trees. The shrine is a popular wedding venue and you might catch a wedding procession with the bride and groom sheltered under a red umbrella.

A professional local photographer will guide you through Tokyo’s brightly lit nightscapes and show you how to use a tripod and long exposures to your advantage to capture the neon, fast-moving traffic and crowds of people on the go. Your photographer’s intimate knowledge of the city will lead you to less photographed parts of the city as well as helping you find unusual angles to view the city’s better-known night scenes of Shibuya and Shinjuku.

Originally a practice to entertain the Shinto faith’s deities, sumo wrestling is now a national sport. Three fifteen-day tournaments are held in Tokyo each year in the Ryōgoku Kokugikan, the national sumo stadium. Bouts usually last only a few seconds; the first wrestler to touch the floor or be thrown out of the ring loses the match. The tension mounts throughout the day of competition, culminating in the hard-fought highest ranking bouts in the early evening. Tickets for better positioned seats or boxes are always bought in advance, bench seats or any unsold spaces are purchased on the door.

If you're in Tokyo out of tournament time, you can visit a sumo training ‘stable’. Wrestlers live in these communal stables, their daily lives running to highly regimented schedules. During your tour, your guide will explain the complex rituals surrounding the ancient sport, and you'll hopefully glimpse a morning practice session. For lunch, your guide will invite you to try chanko nabe — a traditional sumo midday meal. Deliberately high in protein, it’s a chicken broth packed with chicken, tofu and fish.

Tetsuro Shimaguchi and his team of Kamui — samurai sword artists — teach instruction on how to wield a samurai sword. A respected master of his art, Shimaguchi is well-known for his film work, choreographing fight scenes in a number of films including Quentin Tarantino’s Kill Bill: Volume One.

On entering the dojo (practice room) you start to learn some basic movements before advancing to combine them into a sequence. Learning to draw and deftly swing your sword are important aspects of the training, as well as practicing your stance. Your instructors will then demonstrate the techniques at full speed by performing an impressive choreographed sword fight.

Japan has four clear seasons. In Tokyo, September to November, and March through to the beginning of May are the best times to travel given the minimal rain and comfortable temperatures. These are also the busiest periods, so we recommend booking well in advance. Travel outside this time is possible, but Tokyo can experience heavy snowfall from December to February, and the hot and humid climate can make travel uncomfortable from May to August.

Our itineraries will give you suggestions for what is possible when you travel in Tokyo, and they showcase routes we know work particularly well. Treat them as inspiration, because your trip will be created uniquely by one of our specialists.

Our expert guides to exploring Tokyo

Written by our specialists from their own experiences of visiting Tokyo, these guides will help you make the most of your time there. We share both our practical recommendations and the best ways to appreciate Tokyo at its best.

We’ve selected a range of accommodation options for when you visit Tokyo. Our choices usually come recommended for their character, facilities and service or location. Our specialists always aim to suggest properties that match your preferences.

Our specialists seek out authentic ways to get to know the places that could feature in your trip. These activities reflect some of the experiences they've most enjoyed while visiting Tokyo, and which use the best local guides.