The traditional style of housing, the Gassho Zukuri, designed with steep, thatched roofs to withstand the weight of snow, has survived in this area long after it has disappeared from other, more accessible, areas. 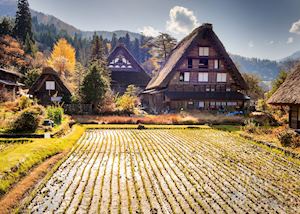 The region was opened up in the 1960s when the river upstream from the villages was dammed, and the subsequent highway into the mountains constructed. It was designated a UNESCO World Heritage Site in 1995, and consequently the number of visitors, and gift shops, has increased dramatically. That said, the village is still a fascinating remnant of an older Japan, and well worth a day trip from Takayama.