Miyajima, or Itsukushima as it was formerly known, has been sacred to the Japanese since the inception of the first shrine on the island over 1,500 years ago. 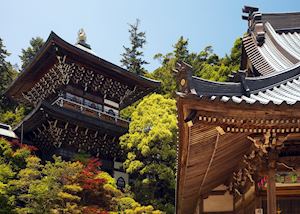 There are several other smaller temples and shrines dotted around the island that are well worth a visit and Mt Misen (530 m) offers great views from its summit and is also home to troupes of wild monkeys.